TB Joshua Is Dangerous To Your Health 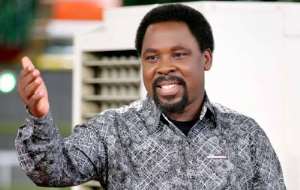 According to a damning article I read about the recent SCOAN tragedy, T B Joshua has been around since the early 90s. However, he only crossed my radar when the late President Atta Mills paid homage to his mega church after winning the presidency in 2008. The reason for the trip was that he attributed his victory at the polls to this swindler. It was a theatrical coup that was handed to him on a silver platter. He could hardly thank his stars, and that was when the sluice gates burst opened for this so called man of God in Ghana.

Apparently, prior to that he has been making sturdy inroads into the hearts of some of the gullible Ghanaian Christian community with his quack miracles and prophesies. On the deception of his naive itchy ear victims, which his Ghanaian counterparts are doing anyway, I kept my pen at bay so long as there was no blood on the floor. Nonetheless, when overzealous congregants at his church in Accra caused stampede that snuffed out the lives of four people, I could no longer keep my silence. Though, it was an accident I couldn't help, but take him on due to his own outrageous and preposterous claims of being able to see into the future.

Since the unfortunate mishap at the beleaguered SCOAN ministry, a plethora of opinion pieces has flooded the electronic media – with some calling for his head. A lot of commentators are also crusading for his outright prosecution, which I am pretty certain is not going to happen. However, his army of defenders have not slept on their oars; they have been very busy. The damage control has taken the tone of aggression. In one of such articles by a certain John Howard, he argued that those critics who do not take cognisance of the plane that flew by minutes before the disaster are being intellectually lazy, which I will take him on my own terms. Now, let's hypothetically assume that it was a sabotage based on his Newtonian Laws of motion.

On the other hand, I want us to push the boundary of reason. This is a man who claims prophetic powers par excellence. He is able to predict disaster half way across the globe, and he couldn't see the evil machinations of saboteurs right under his nose? This is the question he is supposed to answer and not whether it was a foul play. Unless he wants to disclaim his third eye capabilities like everyone else, which the logical conclusion is incontrovertible – fakery.

Our desire to whisk away all our problems by a flick of a wand has provided a fertile field for the African spiritual industry. And none epitomises the army of con men who go by the title: reverend, pastor, apostle, prophet, evangelist like T B Joshua. They have cleverly taken advantage of this human condition and milking it till thy kingdom come. Their ascendency in Ghana, at least, started in the 70s when the pillars of the Ghanaian economy collapsed under the weight of corruption. In the 80s, there was a spate of fraudulent confessions by the main victims of these heartless blood suckers – 'witches'. And as we began to pay dearly for our corruption and incompetence, people run en masse into the arms of these men. Of course, it is not only Ghana and for that matter Africa that we have such tendencies, there has been ample studies to show that there is a correlation between the activities of the far right numbskulls like the Ku Klux Klan and economic depression.

When any economy takes a nosedive the health of the inhabitants is what visibly suffers. As a result of lack of adequate nutrition, the body becomes riddled with diseases and anxiety paves the way for psychological problems. Diseases under such circumstances become recurring and eventually they get attributed to the spiritual realm. That is when the drama begins with swindlers like T B Joshua. They apply their spiritual quackery, which I refer to as spiritual placebo.

Any doctor or astute hospital supervisor anywhere in the world can attest that hopeless patients sometimes make unbelievable remarkable recovery. Likewise, very healthy people can equally fall gravely ill. It is by such circumstances that the victims of these loafers make recovery under their controlled healing crusades and claim unique powers when actually their victims had natural recovery. And the sad bit is that when one out of ten of their victims recover from their ailments they claim credit, but what about the nine. And they will tell you it's their fault, because they don't have enough faith. This is exactly what a diseased mind like Kenneth Copeland, Fort Worth Texas, preached in one of his sermons. Now, if they are genuinely spiritually powerful as they claim they should let amputees grow limbs and cause the born blind to see. Other than that they should stop their patronising nonsense of having supernatural powers.

It is unbridled ignorance, which is feeding a monster like TB Joshua. For those peasants who fall over to his churches it is a lost cause, but the educated ones who prostrate before this trickster is what breaks my heart. I doubt if TB Joshua would have had such huge following in Ghana had it not been for the trip of President Atta Mills to his church in Nigeria. Our fear of death and disease is what sucks us into this maelstrom. At the vortex of these whirlwinds – poverty is the cause of all these nonsense. And those die-hard believers will quip that the rich are among his clients.

Of course, that is right; and this is my measured answer. Instead of them to invest their hard won cash into medical laboratories to find a cure they will rather give it to this fetish priest in suit in lieu of sackcloth. Nevertheless, some densely ignorant person will not rest, but tell me that those fetish priests do heal people. Of course, they do. And they also tell their clients to have sex with newly born babies to get cured of AIDS.

The power of the human body to heal itself is incredible. And it should be known that a person like TB Joshua is dangerous to your health. For the simple reason that if your body, supported by the power of the mind, does not have the natural predisposition to heal itself you are screwed under his spell. The dangerous part is that most people will be better off in the hospital, but when they see the manifestation of aberrations in ordinary people's physical makeup they see it as the norm. They then hope for the healing that will never come – sometimes, destroying their faith needlessly.


The human body starts degeneration by the time you hit 35 and most people begin noticing by the age of 45 and there is no sweet little thing you can do about it. If your genetic makeup is programmed for termination by the age 70, TB Joshua cannot bribe God with his bogus rituals. To extend your life, the best bet will be under the surgeon's scalpel, for example, if you've got gallstones at that age. There are people who succumb to diseases that most survive. Even the common cigarette that is now perceived as deadly, there are people who smoke them into their nineties and they die peacefully in their sleep. Yet, there are some who smoke it and by the time they are fifty their lungs become black as tar. And if you are one of those people what do you do? It is simple. You just stay away from cigarettes and save yourself a trip to SCOAN.

Lastly, our insatiable appetite to blame others for everything that goes wrong in our lives is part of the bedrock of this stupidity. Life is not fair. There is a Ghanaian wisecrack that says life is war. Indeed, it is a battle; and things can go wrong sometimes. And especially when you are getting old and the body is unable to maintain its former youthful prowess, a visit to the shrine of a person like TB Joshua is the end of your decent family life. You will be told that everything wrong in your life is some innocent old lady waiting for a rendezvous with death as the cause of your ailment.

When I was a child, I once eavesdropped on my paternal grandmother's conversation. She made a revealing statement that I kept churning in my mind until I read a treatise on addiction. She said, and I am paraphrasing that witches have compromised the potency of the codeine tablet. So, some of these under current beliefs are what get fed by ruthless people like TB Joshua. It is not just my grandmother's belief, but it has now been commercialised by Nollywood and the Ghanaian film industry, which glorify and literally legitimise the potency of witchcraft. Though, I am a believer of free speech, I honestly think that those types of films should be classified with psychological health risk. It should be labelled: you watch at your own peril. If that is done all these motivational speakers masquerading as pastors, and the TB Joshua's of African will be a thing of the past.