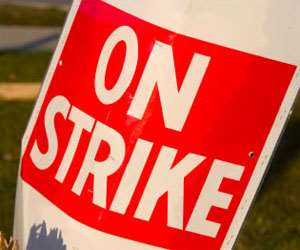 The  Union of Industry, Commerce and Finance Workers (UNICOF) are threatening to embark on an industrial action next week if government does not suspend the proposed implementation of Value Added Tax (VAT) on financial services.

This was contained in a letter addressed to the Managing Directors of 12 banks, the Minister of Finance and Economic Planning, the President of Ghana Association of Bankers, and the Executive Secretary of National Labour Commission

The strike notice dated June 23, 2014 and signed by the UNICOF General Secretary, John Esiape, has the heading, 'Notice To Embark On Strike: Non-Consultation With The Unions/Workers On The Implementation Of Vat On Financial Services And Its Implications On Jobs.'

The letter is also copied to The Secretary General, Ghana Trades Union Congress (TUC), The General Secretary, Industrial and Commercial Workers Union (ICU), the General Secretaries of all TUC Affiliated Unions, and the Chairman/Secretary of Tema District Council of Labour.

According to the letter, the National Union's attention has been drawn to various publications regarding the proposed introduction of Value Added Tax (VAT) on financial services.

However, the Union is of the view that such changes should be discussed at the Standing Negotiating Committee level in order for the parties to appreciate and agree on the implications of the policy relative to performance and job losses among others, but government has not done so.

Consequently, UNICOF is requesting that implementation of the VAT on financial services be suspended pending discussions between management of the Banks and the Unions.

The letter said since the required seven (7) days' notice to embark on a strike has been fulfilled; the Union would take the industrial action should their interest in this matter be ignored.

Notice to embark on strike on implementation of VAT