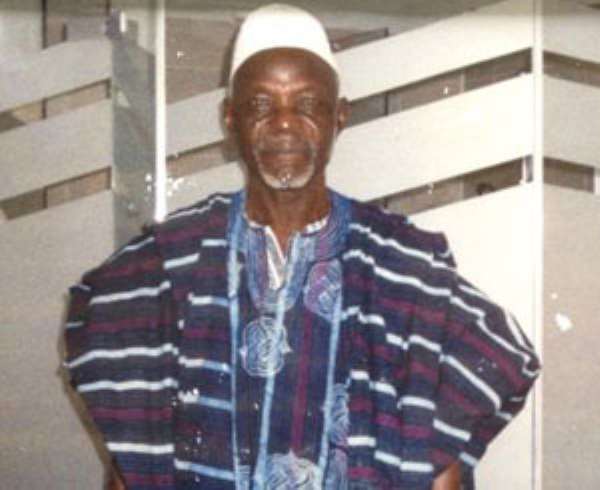 The late R.I. Alhassan was a running mate to the late Prof Adu Boahene in the 1992 elections and was a one-time legal officer for Agipgas in Accra.

He served as a Member of Parliament (MP) for one of the Northern constituencies around 1965 and was detained like his other colleagues after the 1966 coup, which toppled Dr. Kwame Nkrumah's government.

Mr. R.I. Alhassan, who trained in the United Kingdom as a lawyer where he met an English lady from Cambridge, Janet, his eventually wife, lived in Accra before eventually retiring to Tamale.

R.I. Alhassan returned to Ghana in 1961 with Janet, one of the first to arrive at the Tema Port. Janet, with a strong passion for education, established the Alhassan Gbanzagba School in Tamale.

The deceased was the uncle of Mr. Mohammed Awal, former MD of Graphic Communications and now CEO of Marble Communications, publishers of the Finder newspaper.

He was a Kumbungu Royal in Dagbon and an elder of the New Patriotic Party (NPP) in Tamale, who participated in the compilation of the Stolen Verdict, a protest publication of the NPP following what the party considered flawed polls in 1992.

Nana Akufo-Addo and other party personalities visited the deceased on his death bed on Thursday before the party conference in Tamale.

Mr. Alan Kyerematen and a group of party faithful also visited him on Friday evening.

Mr. R.I. Alhassan was said to be following events at the Tamale Stadium even on his deathbed. He eventually succumbed to his protracted health condition in Accra where he had been flown to an awaiting flight for the UK, where he was billed to undertake further treatment.

His remains were flown back to Tamale, courtesy a Ghana Air Force flight and eventually to Kumbungu about 20 minute drive from the regional capital for interment.

A cross-section of Northern elites, the Lepowura Nurudeen Jawula, Dr. Mahamudu Bawumia and other politicians from the two political divides, government ministers and military officers were at the Ghana Air Force Base in Accra to pay their last respects before the take-off.

He left behind his English wife and six children. One of his daughters Mariama was a one-time wife of Alhaji Said Sinare, Ghana's envoy to Egypt.

His mortal remains were yesterday laid to rest at his family home in Kumbungu, the capital of the Kumbungu District of the Northern Region.

Hundreds of mourners from all walks of life, including 2012 running mate of the NPP, Dr. Mahamudu Bawumia, NPP National Chairman Paul Afoko, Alhaji Hudu Yahaha, Murtala Mohammed, Lt. Gen Joshua Hamidu, Dr. Mahamudu Bawumia, Daniel Bugri Naabu and a host of other bigwigs were in Kumbungu to pay their last respects to the astute lawyer.

His remains were first taken to his private residence at Education Ridge before being conveyed for the final interment at Kumbungu.

The widow, who was consoled by other mourners, wept uncontrollably as the body was lowered into the grave located in the middle of the compound house.

Recounting his experience with the deceased, Mr Afoko said he was devastated on hearing the news of his death considering the fact that they both met 12 hours earlier.

He expressed regrets over the sudden demise of the first lawyer from the North and former running mate to Professor Adu Boahen, indicating that his death was a great loss to the party and the country.

'It is difficult for the NPP to come to terms with the reality that R.I Alhassan with all his wealth of knowledge is gone,' he remarked.