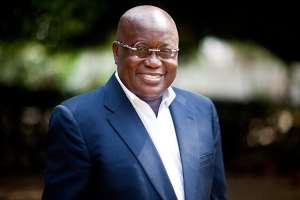 His re-emergence in hot and sunny Accra after an electoral-defeat induced vacation in cold and damp London to declare his intention to contest the NPP presidential primaries has sparked debate about his age, political ambitions and the fortunes of the party and invariably confirmed what has long been suspected in some circles that he will once again throw his hat into the presidential race come 2016.

To Nana Akuffo Addo's political foes - - they are not just confined to the NDC, the NPP is awash with his detractors - - he is overly ambitious, a distraction, a stumbling block to his party's electoral triumph, and at his age, 70, isn't supple enough to withstand the rigors of an intense political campaign to win the nomination of his party, and ultimately the coveted grand prize -- the presidency of Ghana.

His legions of supporters, however, don't subscribe to these views which they readily dismiss as idle talk by people bent on distorting Addo's political ambitions to prevent his ascendancy to the presidency. These supporters, including the insufferable Franklin Cudjoe of the Accra based think tank, Imani, just aren't convinced their man is old and rickety and thus incapable of restoring the party's winning ways despite twice losing the presidential elections.

And they point to the 'poor performance' of the NDC and the resultant sputtering economy as evidence that the party's chances of recapturing the presidency are brighter than before. Yes, the economy is in poor shape and Ghanaians are chaffing under really harsh conditions, but whether that will translate into electoral victory for the opposition NPP remains to be seen.

The debate not only underlines Nana's political significance, it also reinforces a narrative that has persisted for well over a decade that Addo has a stranglehold on the NPP and is not quite ready yet despite an advancing age, to pass on the baton to a younger man/woman who will lead the party to political glory.

As one can imagine this assertion does not sit well with the NPP faithful who are uncomfortable with the idea that one man alone can dominate an organization. But, history is replete with such individuals. Closer home, Rawlings dominated the P/NDC for well over twenty years and won elections. Well, Addo lacks the charisma and persuasiveness of Rawlings.

Though he is yet to win national elections, there is ample evidence to show that Addo's dominance of the NPP is deep-rooted and yet to show signs of weakness. The party gave him the nod twice only for him to go on and lose the presidential elections in 2008 and in 2012.

And clearly cognizant of the massive support he enjoys from the rank and file of the party, he made known his intentions to compete for the party's presidential nomination, yet again. So, how on earth can some NPP folks say with a straight face that he is not the party's alpha male?

Addo's dominance does not bode well for the NPP's fortunes in the long term. It has bred an unhealthy dependence on one man who lacks charisma and the killer instinct. More ominous for the party are the fissures that have developed. Dr. Charles Kennedy and others recently voiced their concerns about this singular focus on Addo to the detriment of others whose political ambitions and ideas are stymied.

Why the NPP would pin its hopes for political redemption on one man is the myth of politics. After all, the party does not lack for skilled, intelligent, charismatic and capable men and women who can revive its winning ways once again.

Allan Kyerematen, Mumuni Bawumia, Arthur Kennedy and a host of others are waiting in the wings for the chance to showcase their leadership skills and should therefore be accorded the chance to lead the party into battle in 2016. The party's electoral success hinges on its choice of a candidate who can appeal to a vast section of Ghanaian voters in the nine regions. Nana Akuffo Addo does not meet that criteria.