Don't Blame The Lifestyle Of Ghanaians For The Falling Cedi 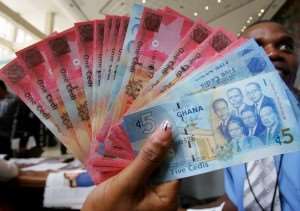 Anybody with basic knowledge of economics can give an endless list of reasons for the avoidable predicament of the national currency. Obviously, Ghanaians from all walks of life have not shied away from offering their take on it.

They range from cynicism, punctuated with brilliance, as well as, hitching a ride on dim wits stupidity to downright hilarious. Without doubt, in times like this the blame game takes a life of its own. Though, there is plenty of it to go around, however, the culpability of some is more equal than others in this very recurring Ghanaian pastime.

This can of worms opens only to the government, because they are not paid those huge salaries, not counting their perks, to think and manage the economy like some hillbillies. Ghanaians did not hire them to play tiddlywinks, but to work hard to better their lives.

I was listening to Mahama Ayariga on this topic, and all that he was waxing lyrical about is cataloguing the reasons for the present predicament of the cedi. The main thrust of his defence of their substandard management is that a shift in our population distribution pattern is one of the main contributors to the deplorable state of the nation's legal tender.

Although, that is a fact, on the contrary, the essence of population census is to help us plan for the future in order to avoid all these pitfalls. On the other hand, what was the outcome of the last census? They decided rather to increase the number of parliamentary seats and create new districts, which add to the number of civil service personnel on government payroll.

This is the enormous elephant in the room nobody wants to talk about. Besides all the cacophonous ranting, we have a lot of precedence around the globe to help us avoid this mess. And if they are difficult to come by it our own colonial masters went through similar experiences regarding movement of population, and its resultant economic and social impact.

A lot of people are making copious brouhaha regarding the country annually spending about $600 million to import rice. In the same breathe a refinery is rotting away in Tema while we are importing finished petroleum product to the tune of $2.6 billion.

According to the experts TOR can be retrofitted to refine 60,000 barrels a day, which will be enough for our current needs. However, we have a president and his cabinet who does not see the malfunction of the only refinery in the country as a national security.

They will rather spend time to attend a meeting on Merchant Bank, which its demise will not have any significant economic impact on the citizenry. There are certain parts of the economy that he needs to know even when a pin drops in their operations.

Tema oil refinery should be treated as a national security. For all that you know a broken catalytic converter has multiplicity of reverberations on the performance of the national economy. And their ramification are too numerous to innumerate here.

It appears the clearing of my throat has taken a little too long. Let me come to the main point of the piece. I have been listening to the discourse regarding the depreciation of the national currency for a while.

And on one of Joy News current affairs programme, News File, Kwaku Baako's reaction when quizzed on the subject captured all my sentiments. He literally felt reluctant; perhaps, tired to comment on it, for the reason that he felt it was an effort in futility.

There is a shortage of food in the country. What I am throwing out here will be derided as bonkers, nevertheless, they will preferably tell you that we have surplus, which is a fact. On the contrary, surplus is a price phenomenon. If the corn we produce in the country is too expensive, consumers cannot buy what is produced, and there will be surplus.

Who in his right mind will argue that if kenkey and fish are reasonably cheaper a rational person would go and buy rice. Now, let's assume that it is a matter of taste. In that case the corn that is produced in the country can be sold on the world market to earn foreign currency if we produce at a competitive price, which, in effect, cancels out.

The problem at the moment is the method of production. We are still producing our food with cutlasses and hoes. There is a limit to what we can go with that. We have gotten to the Malthusian trap, where we can no longer feed ourselves with the productive methods available to us.

The $600 million rice imports is not going to go away very soon so I have to return to it. What the experts are saying is that because we import rice and other consumables is the reason behind our distressed currency. Let us assume that is true.

Even so, the question they have to ask is why we import rice. The rice and the frozen chicken imports are the last drop in this economic titration. They are not the cause. One of the most annoying comments was made by one of the panelists, Dr. Nii Moi Thompson, on the same programme I have referred to already.

He said, the parts of the chicken imported into the country are 'bola'- rubbish, i.e. the wings, legs and gizzards. Before he referred to those imports as rubbish, what he should have thought about is the alternative to those unfortunate Ghanaians who buy these products. People talk as if we don't produce chicken in the country. We do, but they are extremely expensive beyond the pockets of most Ghanaians.

We are all shrewd beings; there is no way anybody will buy an expensive imported goods, which can be obtained cheap locally. We do produce tomatoes, but they are only value for money during the peak season. Sadly, majority of them rot on farms and at the wholesale centres.

Come on; tell me why that is when a whole national asset is rotting away at Nsawam bought by someone without the slightest clue on how to raise capital to operate such a business.

Currently, how many of Ghanaians can afford a chicken for GH¢ 30 or GH¢ 40, which most families taste it once a year. For a lot of people who live in the inner cities the 'bola' is their only source of protein. For a person like Dr Thompson, the importation of such product is the source of the cedi's problems, and if he should have his way it will be stopped. Now, if you stop it out of the window goes someone's source of affordable protein.

Next, the children become stunted in growth - sickness follows, their academic performance suffers, in addition to having to spend more foreign exchange to import drug to cure them. I can bet my dollar that if he should read this piece he will argue that he will not advocate for the curtailment of their importation. If that is the case then it should not have been part of the discourse in the first place.

The BoG's effort to stabilise the currency is a laughable short term remedy. A medium and long term solution cannot be postponed. The solution is such that we have to produce corn, one of the primary feed for poultry, as cheap as possible in order to raise chicken at a competitive price.

Before this can be done our land tenure system, which is not good for purpose will have to be overhauled. The excessive interest rates caused by the unsustainable soaring fiscal and structural deficit under the current administration needs to be addressed once and for all.

As far as I am concerned the government and our law makers don't really care, because they just have to increase their salary by 100% overnight. In essence, the incentive is not there for them to make sure that they manage the economy properly. Furthermore, they are all wimps who are afraid to bite the bullet for posterity.

If they are really serious about bringing the economy back to an even keel they can take a loan from the World Bank or wherever they can to retrench the bloated civil service, which is the open sore at the heart of this perennial economic cancer.

It will be extremely traumatic, but the patient, the Ghanaian economy will stabilise when the loans are paid off within a few years with the savings made from their wages. The country will then see uninterrupted healthy growth fuelled by the private sector.

Let me give you one scenario to refute the falsehood of the so called excessive imports derailing the cedi. We do produce gari in Ghana, don't we?   We do. So there is no way a Ghanaian trader will import that from Nigeria.

Conversely, if production efficiency in Nigeria is able to create a lower price differential factoring in the cost of transportation into the country this will change. On that basis, if a trader is able to make a slight margin of profit while delivering the product at a cheaper price to the final consumer in Ghana businessmen will start importing gari from Nigeria.

The reverse holds true for the opposite direction. The only way the status quo can be maintained is to continue producing competitively. Therefore, increased productivity is what can take the bull's eye in this cedi saga.

Let us now argue hypothetically for those who want to curtail certain imports. Mind you, it's not just tangible imports that consume foreign currency, but services that many consider as superfluous.

The question that arises is whose consumption will have to be curtailed? And who makes that decision, which will be based on human discretion? Corruption is what will bloom like spring flowers.

Currently, there is no Ghanaian airline, so all Ghanaian air travellers who use it purely for pleasure use foreign airline and therefore indirectly use our scarce foreign exchange to pay for their ticket. Come to think of it, students who study abroad also use scarce foreign exchange to pay their fees. Are you going to stop them? What about those who go to abroad for medical treatment? Where does it stop?

Lastly, the dollarization of the economy excuse is just a myth and the most ridiculous. The fact is those who price their products in dollars can decide to keep changing their prices to correspond with the depreciating cedi.

It is not dollarization that is destroying the national currency and for that matter the economy, but mismanagement of the economy that is causing the dollarization. If Ghanaians like rice so be it; that is why we produce cocoa, palm oil and other cash crops for export.

The inherent deficit in our economic performance is low productivity. If 50% of our population is still engaged in agriculture it is a direct indication of how low productivity is in the country. And it needs to be changed and changed quickly.

Else, we will back to the same place, perhaps, next year and the year after that. The fact is as the economy grows and the middle class expands it's not just rice that we are going to import, but drugs, medical equipments, computers and many technical products we don't produce in the country.

I will leave you with one quote. Dollarization is a sign of mismanagement and incompetence by the government.