THEY SPUR ANOTHER SYRIA IN UKRAINE 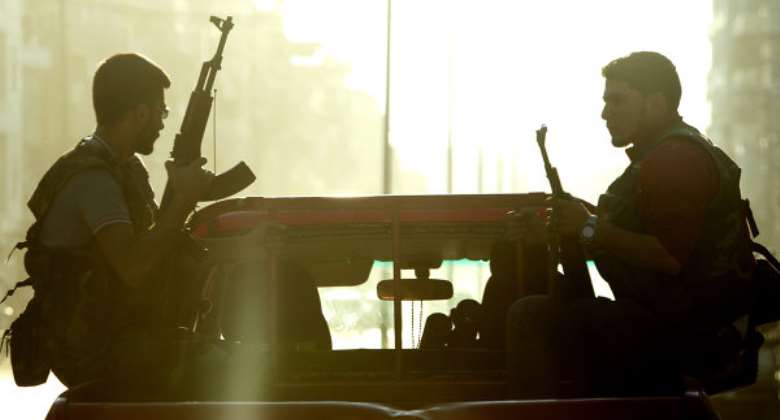 “Anyone who interferes with the destiny of another thing never will discover his own.” Paulo Coelho

The fact that we have exposed the lies and exaggerations of the global elite – from Iraq's illusionary weapons of mass destruction to hysterical warnings of Syria's chemical weapons – does not count for much. The Obama administration — now an imperial presidency in serious violation of the Constitution and the will of the American people — and its partners, primarily the EU (European Union) countries, continue to push for all-out wars despite the transparent quality and facile nature of disinformation put out every few days.

A fresh new report says that the US Congress has SECRETLY voted to fund the delivery of arms to Syrian rebel factions till the end of September 2014. But then comes the utmost hypocrisy!

At the Syria Geneva II Peace Conference in Switzerland, (where, of course the UStakes a centre stand) the UN Secretary General, Ban Ki-moon said: "Syrians must come together to save their country, protect their children and find a peaceful path to a better future." Mr. Ban spoke of the suffering in Syria, saying: "Enough is enough. The time has come to negotiate."

And now, here we go again! This time it's Ukraine. And it's a 'déjà vu' situation.

What makes Ukraine different is that US policy could *theoretically* change. For years the NATO establishment has been debating its stance towards Russia. The case for NATO enlargement largely depends on Western perceptions of Russiato begin with. These protests could be the perfect opportunity for a more assertive US in the region; as if it already hasn't been. I strongly suspect that enlargement will be on the “to do” list!

The US/EU bloc is in the process of chipping away at Russia's regional influence and, no doubt, as an added plus, doesn't mind gaining control over the major natural gas lines passing from Russia, through the Ukraineto Europe. Besides, Ukrainecould become a new borderline base for the US's 'missile shield'. Nothing more than a big, fat provocation to Russia!

The Euromaidan(Ukrainian: literally "Eurosquare") is a wave of ongoing demonstrations and civil unrest in Ukraine, which began on the night of 21 November 2013 with very large public protests demanding closer Europeanintegration.

How many times do we have to hear about “peaceful protestors seeking democratic freedoms” facing a “crackdown by their repressive government” and desperately in need of “humanitarian intervention”?

This time the protesters, definitely in the minority of not more than, perhaps, 18%, are calling for closer relations with the European Union – even though that entity is fast becoming an extension of NATO (Uncle Sam's version of the UN), whose purpose is to bring the planet under US domination.

What we are hearing from the USand from the EU is of course the most cynical hypocrisy. After the last few years of brutal police repressions of the Occupy Wall Street movement in the US and the anti-neo-liberal austerity dictates that have been instituted around the EU, which brought literally tens of millions of protesters out onto the streets, they are calling against the violence in Ukraine, where the majority of the injuries for the past few days have been from the police.

And what is happening in the Ukraineis not a peaceful protest…they are rioting and demanding regime change. The present administration was democratically elected and furthermore there is another election coming sometime next year. So the process is in place for them to peacefully make a change if they choose that path. However, a mob of less than 20% of the people doesn't have the right to put down what the majority voted for, just because they name it 'democracy'. The EU deal sucked and was rejected by the Ukrainian government. So why not let democracy rule and not rioting thugs and extremists?

However fraught its relations with its larger neighbour may be, I suspect that Ukrainedoes not want to be a US/EU puppet either!

Why is the EU confronting Russia on Ukraine? I am bound to think that the EU is showing up neither authority nor confidence by taking this kind of approach. The idea that continental Europe, with its hairnet armies, could have the political will to "confront" Russiais just idiotic. The very most they can summon up is some fairly toothless economic sanctions that will achieve very little

Isn't it time for the EU to stop following US hypocritical policy like a demented poodle and try to build bridges with Russiainstead of antagonizing its people? Scrapping NATO might be a good way of starting the process. It's not Russian hegemony that we need to worry about but the American version which appears to be trying to take over the whole world!

The EU Council chief, Herman Van Rompuy, has blamed Ukrainian authorities for “destabilisng” Ukraine, as protests fan out to the east and west of Kiev. What cheek! The Polish Prime minister, Tusk, has also been calling for €3 million of EU money to be channelled to opposition groups. No wonder all this has been irking and angering a democratically-elected Ukrainian President, Yanukovych and his main sponsor, Russian President Vladimir Putin. In this way, the EU will have exploited a sovereign country once again,

Quite appropriately, Russian foreign minister, Sergei Lavrov, told the press in Moscow: "We would prefer that some of our European colleagues refrained from acting unceremoniously over the Ukrainian crisis, when, without any kind of invitation, members of certain European governments rush to the Maidan and take part in anti-government demonstrations in a country with which they have diplomatic relations.” "It is just indecent,” he added. But what does the European Union know about decency? Let's hope the "Commissioner for enlargement" is not going - once again - to launch irresponsible promises of eventual Ukrainian "vocation to accession" into the EU!

Try to occupy the central square and the city hall in any West European country and you won't last a day. Unfortunately, people like Barroso and Van Rompuy have been encouraging similar behaviour in Ukraine. They are the people destabilizing Ukraine. And while some of the proposed laws in Ukraine seem excessive, many are very similar to laws that are already implemented in EU countries! Couldn't you just wait 12 months for the next Ukrainian election or are you 100% certain that these terrorists/thugs are in the minority? But no! This "bright new star" in the opposition wants power given to him out of the blue and without elections - in other words, he is fomenting a coup. Why can't we call a spade a spade?

I must say I was disappointed that the Ukrainian Government said that they would not use the army to clear these thugs off the streets as, I know, that if these disturbances happened in the UK or USA that would certainly have happened by now. Hopefully they will change their minds

I think Euromaidan truly succeeded with one thing: It successfully put an end to Ukrainian independency. After several Western leaders openly supported an attempt to overthrow the legitimate government in Ukraine and showed a neo-colonial style of attitude to the Ukrainian political environment, the very phrase "independent Ukraine" sounds rather strange. Which independent state would allow foreign leaders to go to the streets and interact with people who just violated the law and occupied several government buildings? What kind of diplomatic behaviour is that when foreign politicians openly pressure the Ukrainian government to "make a free choice" and sign an agreement, and if not, then threaten it with sanctions and revolution? What is it if not neo-colonialism?

The legitimate protesters in Ukraine (not the paid infiltrators),

being tricked by the globalist propaganda into joining the EU and the banking cartel that's sucking the life out of the working class in Greece, Spain, Italy, Ireland, Portugal and all Europe should take heed of where they are heading and what awaits them.

If these protests are about Ukrainenot joining the EU and getting closer to Moscow, protestors should keep in mind that the country needs good trading relations with Russia, not with the banking mafia that controls the EU and the US, which only wants to turn Ukraineinto another colony of exploitation, acquisition, expansion and corruption. The EU and the IMF (International Monetary Fund) have designs on controlling nations and their economies too. Hopefully, Ukrainians would not fall for the malicious machinations, already employed in Yugoslavia, Libya, Egypt, Syria and other countries, of splitting and breaking Ukrainein half.

Europe and America, forget the land of Ukraine!
Your script Yugoslavia, Syria and Libya will not work.﻿