The NPP Political Problems And How I See It: Part 1: Underestimating The Strength Of The NDC’s Political Campaign Prowess 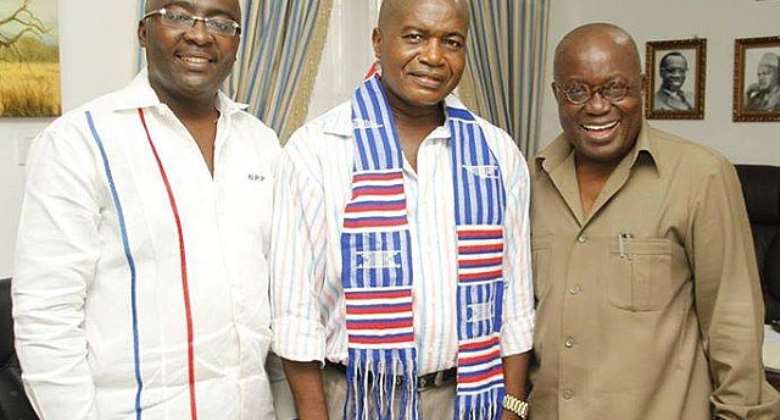 Many NPP loyalists and apologists believe that their party does a better job at governing the nation than the NDC party, but has a hard time winning elections in Ghana. The NPP party has won only two out of six elections since 1992, when party politics and political campaigns were reintroduced by the then-dictator, Flt Lt. Jerry John Rawlings. They lament, with good reason, that their party has suffered several electoral defeats because of poor of planning, lackadaisical campaign strategies, lack of focus, and internal organizational problems, stemming from conflicts or factions within the party, often creating seemingly contradictory situations that prevent the party from winning elections.

Some observers also believe that what is destroying the party is not only an evil force from outside, but from within: the major problem is group dynamics. There are so many archetypes in the NPP leadership who do not understand how groups function. The party is being destroyed by self-serving interests, personality cults, pervasive egoism and narcissism, all of which undermine group effectiveness. None of the leaders seem to pursue group or party interests over personal ones. A party that seeks to take power away from a formidable incumbent party should have a broad coalition among its leadership, based on agreement on issues of winning the elections, while temporarily suppressing their individual interests, disagreements, egos, and self-serving priorities.

The party leadership should be speaking loudly and clearly with one voice, instead of each member of the party leadership seeking to help himself or herself to privilege, prosperity and power. The conversation at this point should be on political debriefing to answer the question of why the party has been losing elections. Any discussion of flagbearership should emanate from the elections debriefing. Astute and level-headed individuals among the leadership should be asking about who is an electable candidate, someone with a new and moving story to tell voters, instead of focusing on candidates that will serve their own particular cliquish interests.

While the rest of the series will focus on the NPP's internal problems, the remaining portion of this particular article will deal with one major reason from outside the organization that explains the party's serial defeats: underestimating the NDC Campaign's prowess. The ensuing series will seek to elaborate on some of the problems enumerated in the introduction, analyze them and provide suggestions that can be helpful to any party in Ghana that intends to win elections.

Someone once said, “Insanity is doing the same thing, over and over again, and expecting different results.” The NPP can't win elections if they continue to operate the same way they have been operating since 1992. If the party continues to make its best appeals to voters only when the other side is so bad or corrupt that Ghanaians have no choice, then the party has a long way to go. Studies have shown that even when voters doubted the honesty and general integrity of the ruling government's policy-making process, such doubt did not necessarily lead to support for the opposition. Instead, voters' preferences were largely influenced by the opposition's viability and competence in providing better leadership and workable solutions to their pressing problems (John Zalter, 1992).

For the party to be viable, it needs to be disciplined, well-institutionalized, internally democratic, coherent and consistent, as well as having a clear message as what the party stands for and how it is distinct from the other party in its message to voters. Instead of engaging in accusations and counteraccusations, the NPP party should offer messages of hope to the electorate, telling them what they want to change, and from where to where. The party should also understand that you cannot win elections just by appealing to the mind; you must also appeal to the hearts of voters—a point on which I intend to elaborate in my future articles.

The major political problem from without that confronts the New Patriotic Party (NPP) can be summed up in one sentence: they underestimate their political opponent. A political campaign is warfare, and as in warfare, one must be guided by the actions of the opponent to be able to secure a favorable position in the actual warfare. The great Chinese military general and war tactician Sun Tzu observed, “If you know the enemy and know yourself, you need not fear the results of a hundred battles.” The only way the NPP can win elections in Ghana is by recognizing that they fight a formidable opponent.

In the Christian gospels, Jesus advised his disciples to be wise like the serpent. In one of his parables, he commended a shrewd servant for his skill in what he did. Jesus was not commending the shrewd servant for his evil deeds, but rather saying the shrewd servant was skillful or good at what he does. He wanted his disciples to know that the only way they could defeat their opponents was to know their craftiness. NDC as a political party is better at winning elections in Ghana than the NPP. Therefore, the only way NPP can win elections in Ghana is to know the strengths of its opponent.

What Jesus said can also be encapsulated in political science or economics jargon as the “Sequential Game Theory.” The NPP has to understand that wishful thinking does not work in political campaigns, because it is not a good political strategy. The political strategist needs to think about three strategic components: preferences, actions or strategies, and outcomes. The strategic questions for the political tactician are: who are the players in the game, how do they intend to affect the outcome of the game, and what do they want? The next layer of questions is: what are the actions or strategies of my opponent, and what are their choices? And the last question is: what are all the possible outcomes? Here, the strategist or political tactician is not only thinking about the things that have happened in the past, but also considering the things that didn't happen, but could happen this time.

The idea in sequential game theory is that one player does something and the other player sees it and does the same. Thus, you think about the other player's strategies and do likewise. Unfortunately, in politics, one player (the incumbent) is always ahead of the game, because of the fact that the challenger may not be known until a later time.

As I said earlier, the NDC as a political party is a formidable opponent, which the NPP always underestimates. I met an NPP man before the 2008 elections who had just returned from Ghana after a brief visit. I asked him about the political situation in Ghana, but I was taken aback by the extreme naiveté of the man when he said, “As for NDCs, they are no match; even if the NPP nominates a chicken to stand against the NDC party, it will win.” I wanted to teach this man a lesson in political campaigning, but to no avail.

The first thing that the NPP people have to recognize is that the NDC people have ruled Ghana for more of its recent history than the members of any other political group. I use the phrase “NDC people” advisedly, to refer to people who were in the PNDC and now make up the NDC. The people have ruled the country from December 1981 to 2000, and from 2008 to present. This means they are ahead of the Ghanaian political learning curve. Second, they know the political psyches of Ghanaians in a way that no others do. This is because they have shaped the minds of many Ghanaians in a way that no one else has. The communist inferior tactics and propaganda machinery they employed during the PNDC era changed the political culture and the souls of many Ghanaians.

Third, the NDC people are more united, committed, and dedicated to their causes than the NPP people. One thing I have seen is that the NDC people are committed and consistent in what they do. For example, a visit to the opinion section of Ghanaweb, popularly known as “Say It Loud”, can educate one on their commitments. They have people online 24 hours a day, responding and sometimes castigating anyone who writes anything they dislike. They have learned that a lie repeated ad infinitum can stick in people's minds. For example, I have no idea where they heard that Akufo-Addo ever smoked marijuana, but these people stayed on this allegation constantly and made it appear as if they had the facts to back it up.

Fourth, unlike the NPP people who show their opulence in front of their fellow Ghanaians, the NDC people have learned sophisticated ways of stealing from the country coffers that the unsophisticated Ghanaians can hardly detect. They have also learned to use populist messages to which the majority of Ghanaians can relate. Through their propaganda machinery, they have made sections of the Ghanaian population believe that the NPP is an elitist party that does not care about the masses. Unfortunately for the NPP, the Kuffour government did not put in place policies or actions to disprove these perceptions.

Fifth, their leaders have learned very well the need for shrewd leaders to use proxies to do their dirty work, while they preach about God and His providence. They know when to send Fiifi Quartey, Ablakwa, and Tony Aidoo to insult and lie, while they themselves preach about the sovereignty of God. Many of President Mahama's policy statements have been issued from the pulpits, yet he remains silent when he hears his surrogates lash out at Christian leaders.

Sixth, they are also good at grassroots operations: their grassroots operations are superior to those of the NPP. One gentleman related to me recently that an NPP candidate was shocked when, on Election Day; he saw a fleet of taxicabs that had been arranged by his NDC competitor to come and transport voters to the pooling stations to vote for him: the gentleman did not think deeply about all the possible things his competitor could do. I predicted elsewhere, two years before the 2012 elections, with good reason, why the NDC had a better chance of winning that contest.

Lastly, the NDC people are also good at selecting electable candidates compared to the NPP. The NPP could have captured the 2008 elections if they had selected the then-vice president and coalesced around him, instead of the political circus that took place, with more than sixteen candidates competing against the vice president. The rejection of Mr. Aliu Mahama strengthened the NDC's accusation that the NPP is a PRO-AKAN Party. There is a real need to select electable candidates. The fact that there is no primary election in Ghana, but candidates are selected by a small group of people, makes it likely that the candidate selected might not be the one party members would have selected as their party standard-bearer, thereby damping their enthusiasm.

It is therefore important to float the names of presidential hopefuls to the general public, to the public pulse on the electability of the candidates before thinking about whom to support. It is high time the party decided whether they want a particular person to be a president, or they want their party to win political power—a decision that is pregnant with profound political implications.