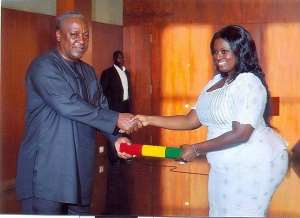 The US branch of the main opposition New Patriotic Party (NPP) says dismissed Deputy Communications Minister, Victoria Hammah, must be arrested over her comments that Gender, Children and Social Protection Minister, Nana Oye Lithur, secretly met the Justices that sat on the election petition case before the final verdict was delivered.

Hammah was fired Friday after a secret tape was leaked on which a voice resembling hers, was heard hinting that Oye Lithur played a role in the Supreme Court ruling that went in favour of the Respondents in August.

Oye Lithur has denied the allegation in a statement but the NPP-USA believes an “arrest” and “interrogation” of Hammah are in order.

On the leaked tape, the purported voice of Victoria Hammah is also heard vouching to make at least US$1 Million while in politics.

The same voice, together with her interlocutor, also described one of Nana Oye Lithur's Deputies, Rachel Appoh, as “ugly, unintelligent and egoistic”.