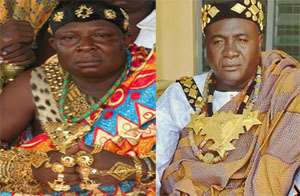 The Volta Regional House of Chiefs (VRHC) has declared Torgbui Adzonugaga Amenya Fiti V as the 'true, rightful and only' paramount chief of the Aflao Traditional Area, in the Ketu South municipality.

The declaration was made yesterday, during an emergency meeting of the House in Ho which attracted majority of the recently expanded members of the House.

The President of the House, the Agbogbomefia of the Asogli State, Togbe Afede XIV, who read the declaration, said it was issued by the Standing Committee of the House after a meeting the previous day, Monday, October 21, 2013.

It stated that the Standing Committee of the VRHC held a meeting on Monday ahead of yesterday's emergency general meeting, and agreed unanimously as follows: 'Torgbui Amenya Fiti V has been a rotatory member of the VRHC for several years, during which we have not received any protest about his membership.'

Secondly, Torgbui Amenya Fiti V had been known to the House over those years as the Paramount Chief of Aflao Traditional Area and the House and members have referred to him as such without any protest from any quarters.

More so, 'The House has worked hard to ensure the passage of legislation which expanded the permanent membership of the VRHC to 59 traditional areas including Aflao. As a result, Torgbui Fiti V recently took an Oath of Office and was sworn in as a permanent member of the VRHC'.

Togbe Afede
Togbe Afede continued that, 'Given all the time, energy and resources we are investing, with support of government to find solution to the Alavanyo/Nkonya land dispute, the Anlo Chieftaincy dispute and other land and chieftaincy disputes that are retarding progress in our region, we cannot afford any provocative acts and much less from the south, which have the potential to result in violence and loss of life and property.'

The resolution assured that the VRHC would continue to respect the membership of Torgbui Fiti and accord him all the respect, rights and privileges until otherwise directed by a court of competent jurisdiction.

Therefore, 'Any new claimants to the Aflao paramount stool are accordingly advised to proceed to court to seek legal recognition to their claims.'

Call For Peace and Security
The Standing Committee noted that peace and unity are important for the realization of the VRHC's development plans and objectives for the region and called on all citizens to conduct themselves in ways that promote peace and unity.

They also thanked the President and the Regional Security Council (REGSEC), chaired by Nii Laryea Afotey Agbo for all their efforts towards ensuring peace in the Volta Region and assured them of the fullest cooperation of the VRHC at all times.

Nii Afotey Agbo and the Regional Police Commander, Assistant Commissioner of Police (ACP) Fred Agyepong Asare assured the Chiefs of their support to ensure that the peace of the region is secured and development guaranteed.

Flashback
This resolution comes in the wake of recent confusion surrounding the Aflao chiefdom. It will be recalled that late last September, DAILY GUIDE broke the news about a rival Chief, Torgbui Afla Awunor Detu IX contesting the Aflao Stool.

As a result, tensions went high leading to a strong military and police presence in the area to avert a possible clash between the citizens of Aflao and that of the rival chief who seeks refuge in Anloga. According to the facts of the case, the said Chief was confined in Anloga and installed there to be later presented to the Aflao State where he is intended to rule.

On the eighth of this month, the simmering tension led to a false alarm over the alleged abduction of one Torgbui Ndorkutsu of Apekotuime, (a suspected conspirator to the installation of the rival chief) by the Awadada of the Aflao Traditional Area, Tordgui Kpasra Ankrah V for suspected treason.

This was followed by a press conference held a few days later in Accra by some chiefs claiming to be from Aflao, announcing the installation of the rival Chief.

The spokesperson, Torgbui Sabbah V distanced the Awoemefia of the Anlo State, Torgbui Sri III from the new installation although it was done at the seat of his stool, Anloga.

He added that the installation was to fill the vacant seat of one Torgbui Detu VII who died many years ago and not an attempt to torpedo 'or create a rival chief in our area but rather to continue with what our predecessors left us and to protect, preserve and promote our long cherished heritage.'