One of world’s rarest frogs found in Ghana 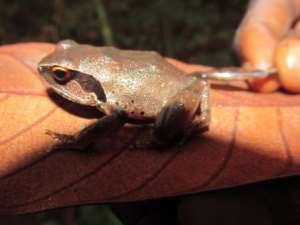 A team of scientists has found the critically endangered frog – the Krokosua Squeaker Frog (Arthroleptis krokosua) – at Ghana's Sui River Forest Reserve in the Western Region, after four years of intensive search.

The expedition was carried out by the nonprofit SAVE THE FROGS! Ghana, assisted by students at the Department of Wildlife and Range Management at the Kwame Nkrumah University of Science and Technology.

“We have looked forward to this moment for the last four years. We are excited about the discovery as this has given hope that together we can save the Giant Squeaker Frog from extinction,” stated SAVE THE FROGS! Ghana Executive Director, Gilbert Adum, who led the nine-member team that made the discovery.

The Giant Squeaker Frog was first identified in 2002 from single specimen that research scientists found at the Krokosua Hills in Western Ghana.

Despite active searching to find more frogs it was not until 2009 that another Krokosua Frog was found, when 14 individual frogs, its highest abundance ever, were recorded at the Sui River Forest Reserve.

According to the researchers, what was most spectacular about the new finding was that the frog was recorded at an entirely new location and was at the highest point of the Sui Hills, 610m above sea level. The frog was an adult, indicating that a breeding population may be surviving at this location.

However, Sandra Owusu-Gyamfi, Programmes Coordinator at SAVE THE FROGS! Ghana, laments that the Sui Forest faces severe threats from logging, mining, farming and invasion of the alien Devil Weed, popularly called 'Achempong' weed.

She says the weed invasion and the habitat destruction activities may be the reason the Giant Squeaker Frog is not getting the chance to recover from the brink of extinction.

Gilbert Adum wants government and conservation organisations to ally SAVE THE FROGS! Ghana to ensure the continued survival of the Giant Squeaker Frog.

The team is also calling on the Forestry Commission and government to immediately delineate and protect the Squeaker Frog's habitats permanently from any form of exploitation.

This project received funding from the Conservation Leadership Programme and SAVE THE FROGS! USA. Additional funding was also received from the Rufford Small Grants Foundation, and the German-based Stiftung Artenschutz (Species Conservation Foundation).

SAVE THE FROGS! Ghana is committed to protect Ghana's amphibian populations and to promote a society that respects and appreciates nature and wildlife.

Odododiodoo: ‘Impotent’ Police Cause Of Constant Clashes – ...
22 minutes ago