Rawlings: NDC must clean-up or risk 2016 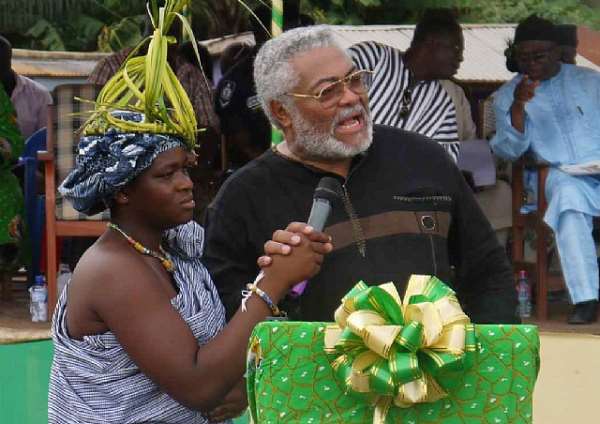 'Our party the NDC needs some significant reform to face the challenges of the dynamic global political climate. Our current internal structures need to be reviewed. I do not think the necessary reforms required in order to clean up the image of the party are being treated with the urgency they require. If we do not act in cleaning up the party, we will, as I warned before, face a problem in 2016', he warned.

For Rawlings, who is also founder of the NDC, an electoral college of 20,000 delegates was not representative enough of the views, choices and aspirations of the masses of the people that represent the grassroots base of the party. He believes a number not less than 150,000 delegates will do for the party.

Ex-president Rawlings was delivering the keynote address as Special Guest of Honour at the 12th edition of Deza, the annual festival of the people of Dzodze in the Volta region on Saturday.

The time, he said, had come for the NDC to enlarge its electoral college to a larger group of people which was a better representative of various local communities, to elect officers of the party all the way to the flagbearer.

He said even though some other parties may have initiated that method, the NDC could do it better and come up with a larger and a more representative college, saying that should have been done a long time ago.

Ex-President Rawlings urged executives and officials of the party with integrity to support the call for reforms and that 'they should have nothing to fear'.

'Let us not do anything to undermine the attempt to hand over the party to you the people. To do so, to attempt to undermine it, will be risking the life of the NDC. The NDC must get back into the hands of its power base', he stressed.

He recounted that the party struggled after losing power to the New Patriotic Party in 2000 all the way to 2008 because of some practices that adversely affected the party and which required strenuous efforts to regain power in 2008.

The NDC, he said, had planted trees that had grown fully for the benefit of all but some people had come to cut down some of those trees. He said judicial justice had been destroyed in the country.

He had made incessant calls, he said, for the investigation of corrupt officials of the NPP when the NDC regained power in 2008 but all those calls fell on deaf ears.

'Before we lost the 2000 elections, our ministers and other government officials had done nothing that required them being jailed but they used their judges to jail them. There were a number of things that we should have investigated but our brother (Mills) refused and did nothing about it. There were some of our own who also felt that since nothing was done to the corrupt officials of the NPP administration, then they could also do same', he alleged.

God, he said, realized that the path that Prof. Mills had taken would not help and had to call him to his side in heaven saying the second thing that God did was to put John Mahama in Mills' place.

But the third, he said, now depends on the masses: 'You were the ones that gave the power to Mahama and not the executives of the party. You, the 20,000 delegates gave him the mandate and not the executives. If you do not take back your power and re-insert your spirits and souls into the party like we did in the past, 2016 will not be good', he warned.

He entreated the people to translate the victory of the NDC into politically organized power, adding that if things should stand the way they were now, it would give the chance to 'destructive elements' to contest again.

'An NDC decision must not emanate from only 20,000 people. Leave it at 20,000 and see what will happen in this country come 2016. That one, God will not help us. Rawlings will not help us. Mahama will not help us. Your victory will come from taking back your party. An expansion of the Electoral College, the voting power', he advised.

He said Ghana was being touted as an oasis of political stability in a desert of conflicts and uprisings on the African continent, adding that that enviable record was a product of a sense of perseverance, sacrifice and patriotism that 'many of you and a host of fallen heroes had to endure particularly in the difficult days of the revolution to lift the country out of the failed economic and political situation it found itself'.

'Today, some modern day converts operate as if they own the copyright to the pains and sacrifices you the people had to endure', he observed.