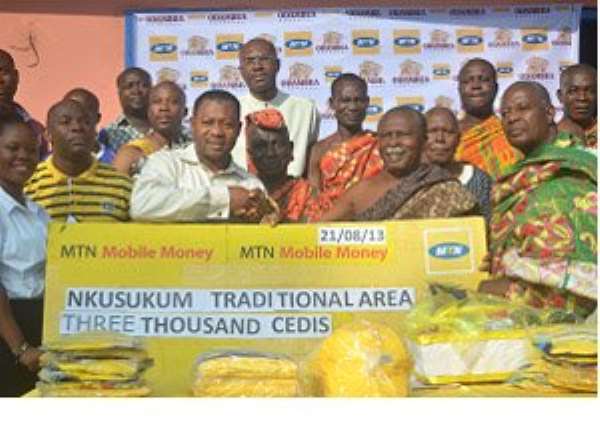 This year's Odambea Festival for the chiefs and people of Nkusukum Traditional Area has been launched at a colourful ceremony at Saltpond in the Central Region.

The traditional showpiece dubbed – MTN ODAMBEA 2013 – has taken a new dimension with the brand of the headline sponsor, MTN.

Odambea is celebrated by the chiefs and people of the Nkusukum Traditional Area, which is made up of 24 towns, including Saltpond, Biriwa, Mankessim, Duadze among others.

Activities lined-up for the thrilling 2013 event promises to be the biggest in the history of the festival.

Top among the activities would be a musical concert – 'MTN STREET JAM'.

The street jam would witness performances from some of the finest artistes in the Ghanaian music industry to thrill thousands of people from all walks of life to exciting music and entertainment.

The artistes billed for the MTN Street Jam are Stonebwoy, Keche, Nhyiraba Kojo, Stay Jay, YaaPono, D Cryme, Castro and many others.

Also, the MTN Rap Kasahari Competition would challenge upcoming rappers to unearth the CAN-DO-SPIRIT in the youth to reveal their hidden lyrical and dynamic talents in the Nkusukum Traditional Area.

MTN, Ghana's number one telecommunications company, is supporting the festival to foster family reunion and build strong family ties, as well as enriching culture and heritage of the people.

The headline sponsor, MTN, is supporting the festival with GH¢3000 and souvenirs, while other sponsors including Kasapreko Company Limited, Ghana Commercial Bank, Vits Instant Noodles, Everpure Ghana Ltd gave GH¢1000 worth of products. The sponsorship was initiated by Strategic Communications Limited.