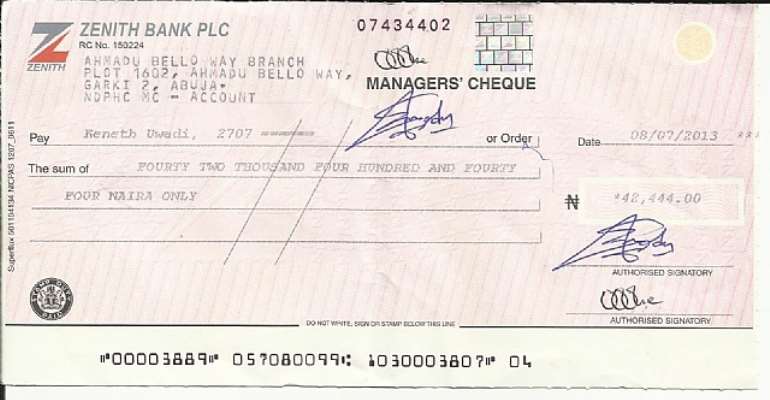 In its 2013 Global Corruption Barometer which surveyed residents in 107 countries, TI ranked Nigeria the 8th most corrupt country in the world. The recent corruption report by the anti-corruption agency, Transparency International (TI) placing Nigeria as the 8th most corrupt country in the world is serious enough for our policy makers and other stakeholders not to bat an eyelid. Recent developments in Nigeria could not have produced antithesis. One of such nagging albatrosses which is threatening to rock the fragile confidence in the financial and investment thrust in the country is the issue of increasing dud cheques recorded in the banks.

The Central Bank of Nigeria (CBN) has disclosed that over 167,507 dud cheques, with total value of N166 billion were processed by Deposit Money Banks (DMBs) between January and December 2012. Nigeria is still engaged in a battle to exit from the dishonorable list of those countries which are accused of not doing enough to curb money laundering, corruption and terrorism that is why I got angry when I was issued a dud chequeby NDPH (Niger Delta Power Holding Limited)

I am fromMmahu-Egbema of the Ohaji/Egbema LGA in Imo State of Nigeria. As part of the National Integrated Power Project, Rockson Engineering is carrying out the engineering, procurement and construction of a 378MW gas turbine power station in Mmahu-Egbema for NDPH . The National Integrated Power Project (NIPP) was conceived in 2004 as a fast-track government funded initiative to stabilize Nigeria's electricity supply system. NIPP was originally designed around seven medium sized gas fired power stations in the gas producing states, and the critical transmission infrastructure needed to evacuate the added power into the national grid. A commitment to electrify host communities in the vicinity of the power stations and major substations gave rise to the distribution component of the project. Niger Delta Power Holding Limited is in charge of theEgbema power station. Egbema Power Plant Project was conceived as a simple cycle power plant with 3 Gas Turbines having the generating capacity of 112.8 Mega Watts of electricity and a combined generating capacity of 338MW of electricity into the national grid.

I am one of the landlords of the Egbema Power Plant. My parents planted cassava, maize and yams on my kindred farmland. My kindred farmland is my parent's means of livelihood. It was painful when my parent's means of livelihood was damaged by Niger Delta Power Holding Limited and Rockson Engineering in course of building the Power Plant in our farm land. We cannot deny our community a huge development by rejecting the NIPP project. NDPH agreed to pay compensation to us for our damaged crops and damaged trees and in year 2009 NDPH under NIPP did the assessment of damaged crops and trees on our farmland.

In August 2013, four years after the assessment ,NDPH called us to Owerri where I was issued a Zenith bank Managers cheque with Account Number 1030003807 Cheque number 07434402 as compensation for my damaged crops and trees. Guess how much is on the cheque .. fourty two thousand four hundred and fourty four naira (N42,444). My God! What a ridiculous compensation for my damaged crops and trees. The worst of it all is that this cheque turned out to be a dud one. I went to Zenith Bank Omoku Branch in Rivers State in the same August 2013 and the cashier at the counter told me that they cannot honour the cheque for there were issues with NDPH account. I asked the type of issues but the cashier refused to speak further. Otio! I climbed upstairs to talk with the Operations Manager of the bank and he gave me the issue excuse too but chipped in that NDPH has no money in the account yet and told me sorry, we can't pay yougo back to NDPH.

My God! Dud Cheque! A dud cheque is a cheque that is written for more than the amount in the issuer's bank account e.g. a cheque for N200 when the person only has N150 in his bank account. The actions of dud cheques issuers are beginning to adversely affect the 'cash-lite' policy currently at the pilot stage in some Nigerian states. Dud cheques issuance, which is on the increase, results in low confidence in the acceptance of cheques, one of the key elements of the 'cash-lite' policy. NDPH ought to have made sure that their accounts are funded before issuing a cheque to a third party.

The provisions of the Dishonoured/Dud Cheques Act make it an offence for any person anywhere in Nigeria to induce the delivery of any property or to purport to settle a lawful obligation by means of a cheque which when presented is dishonoured on the grounds that no funds or insufficient funds were standing to the credit of the drawer of the cheque, and for matters connected therewith.I condemn in strong terms this dud cheque issued to me by NDPH. I see this action as insensitive and utterly inhuman. I demand an open apology from the management NDPH and I demand for adequate compensation for the destruction of my farmland and for Mmahu people.

Imagine my farmland destroyed and I was paid just N42,444 .NDPH with this ridiculous compensation has put more excruciating burden and poverty on Mmahu mothers and fathers who have been daily subjected to untold hardship by various anti-poor policies of the federal government. Let no one be deceived, the damaged Mmahufarms , like others, have wrecked incalculable havoc on the living standard of the poor working people of Mmahu who are farmers . Like we know, lack of farms to cultivate has instantly hike up the cost of food in Mmahu without corresponding increment in income of the people . This pro-capitalist and counter-productive policy of NDPH has yielded a harvest of hunger , high waves of crimes and prostitution in our land.

I have scanned and attached the cheque issued to me. I hereby call on the various government agencies to investigate the compensation for damaged crops and trees by NDPH in Mmahu-Egbema so as to unearth the stinking smell coming out from there. This NDPH neo-liberal policy in Mmahu must not be treated as an isolated or incidental occurrence but rather as a manifestation of the pro-rich, and anti-poor agenda of some capitalist thieving vampires in NDPH who wants Mmahu to be in mass poverty in the midst of abundance. We say No to this .Dare to fight, dare to win.