Rejoinder: Solomon Nkansah got it all wrong 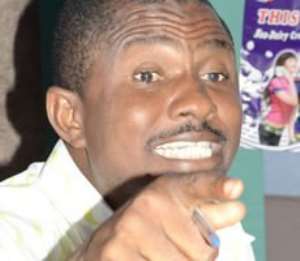 Yesterday, my attention was drawn to an article with the above headline attributed to Kwame Okoampa-Ahoofe, Jr., (Ph.D) which appeared on myjoyonline.com on 12th August, 2013 (http://opinion.myjoyonline.com/pages/articles/201308/111285.php). My purpose for writing this rejoinder is to correct this highly uninformed assertion by a man who clearly could do better. I will show that he has committed what philosophers may call a 'fallacy of ignoratio elenchi'; and that his views on the Northern Region are myopic, his geography malnourished, and his knowledge in basic cultural studies very watery.

In the said article, Kwame stated among others, that, ''Indeed, if Nana Akufo-Addo failed to clinch the same margin of victory in the Eastern Region that President Mahama did clinch in his home region of the North, this is fundamentally because the Eastern Region has more ethnic diversity and better educated and more politically savvy inhabitants than the Northern Region, where voting is largely conducted more along the morally regressive lines of what is sociologically called the "herd-mentality."

First of all, it is not and cannot be true that the Eastern Region is more ethnically diverse than the Northern Region. It is totally wrong, if not pathetic, for Kwame to make such a comment and to suggest that the people in Northern Region vote largely along what he describes as ''morally regressive lines'' or ''head mentality''. As a matter of fact, seats have swung between political parties in the Northern Region than in the Eastern Region, which our PhD man is citing as a more political refined region. I, however, do not intend to argue with him on what lines the various regions in Ghana vote. I would leave that to pollsters like Ben Ephson.

It is surprising for an academic like him who writes commentary about Ghana almost on a daily basis not to know this. It is only people who are conservative to change, prejudice mind-set or totally lack ample knowledge of Northern Ghana who will most likely churn out such divisive and ignorant 'tantrums'.

Northern Region, most especially, is home to the Dagombas, Nanumbas, Kokombas, Mamprusis, Gonjas, Basaris, Vagalas among others. We also have Akans, Ga-Adangbe, Ewe, Guans and other ethnic groups living in the region. And so for the writer to think that Northern Region is made up of one homogenous ethnic group is but clear a manifestation of his poor intellectual depth of his country. It tells how people of his kind, living outside the country for so many years, after a cup of coffee will just write anything and mis-inform people about Ghana.

If Kwame supposedly has PhD and yet falls prey to this pettiness, how will those at the basic level who probably do not even know the difference between Northern, Upper West and East Regions think? It is like referring to Africa as a single country. I feel sad that people simply do not want to learn about other tribes and would lump all ethnic groups in Northern Ghana together. This is partly responsible for some of the polarisation, prejudice and inter-tribal conflicts we are experiencing in the country.

If people in the Eastern Region are 'better educated and more politically savvy inhabitants', as Kwame wants us to believe, must the people of Northern Region bow to their counterparts in the Eastern Region? I do not think a statement such as this is good for the cohesion, peace and national unity we so much crave for in Ghana. This is not the time to divide the country but the facts must be stated. I am sure by now Dr. Kwame Nkrumah, Dr. K.A. Busia, S.D. Dombo, Dr. Hilla Limann, Prof. Atta Mills, Jatoe Kaleo will all be turning in their graves about events happening in their beloved Ghana.

Ghana, like many other countries is facing energy crisis, rising unemployment and a host of other challenges. It is the duty of every citizen to contribute their quota to the development of the country through various means and not only by holding political office. It is the expectations of Ghanaians to see our intellectuals; technocrats propose solutions to some of the challenges confronting us as a people.

However, many a time, these so-called intellectuals are the ones who disappoint us through their utterances and comments of disunity and tribalism. One of such intellectuals is Dr. Kwame Okoampa-Ahoofe.

At this crucial moment, let us preach peace, unity and propose solutions to the numerous problems bedevilling us as a country. We need to be guided and responsible in our utterances; especially at this time that the national peace council and Ghanaians are calling for peace and national unity at this sensitive moment of our democratic dispensation. If the people of Northern Region got formal education late through no fault of theirs, it doesn't mean they are incapable. Let me state here that, I am not from the Northern Region but I am concerned as a citizen of Ghana. I have been to every region of Ghana and have taken it upon myself to learn about other tribes and that is what every Ghanaian should do so we can co-exist peacefully.

Francis Xavier Tuokuu is a postgraduate student in Corporate Social Responsibility and Energy (MSc) at The Robert Gordon University, Aberdeen, Scotland, UK. You can reach him via [email protected]