The Ayew Brothers’ Temporary Retirement From The Black Stars 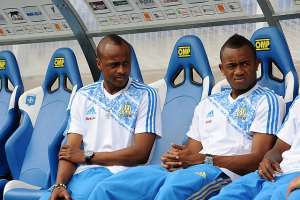 In 1987 the Sierra Leone national team inflicted a 2-1 defeat on the Black Stars in Accra in what most sportswriters described as a black Monday. Among the players who donned the Ghanaian national colours was Abedi Ayew popularly known as Abedi Pele.

Right after the match this player announced his resignation or is it retirement from the national team and for close to three or four years did not honour any invitation to play for the national team.

During his absence from the national team, a player from Liberia, 'Oppong” Weah, who was also playing in the French league as Abedi, continued to win the African footballer of the year in succession because he was playing for his country. This development made Abedi to rejoin the Black Stars as he realized that the only way to gain international recognition was to play for one's country.

Unfortunately for Ghana, when Abedi rejoined the Black Stars, instead of the then Black Stars management, the GFA and the Ministry of Sports facing the reality of a give and take affair regarding his continued participation in the national team, they made it look as if without him there would be no Black Stars and so acquiesced to any useless demands he made on the team.

I will recount two of those useless demands: First they made him the captain and stripped the then captain and current coach of the Black Stars Akwasi Appiah of that position because according to the GFA at the time Abedi was fluent in French while Akwasi was not.

How his fluency in French won us medals and cups are there for all to see!! The second was when Ghana faced Germany in Bochum. In that match Abedi was late in reporting so the most senior at the time Anthony Yeboah who was then playing in Germany was given the captain's band to lead the team.

On his arrival, it is alleged that Abedi insisted on wearing the captain's band else he would not play, and as usual the GFA management did his bidding. That did not end there. During the recess he is alleged to have told the locals at the time who were all defenders that they were going to receive far less than what their professional colleagues would receive as bonus. Was it any wonder that Germany scored 6 goals in the second half when Ghana led 1-0 at half time?

It was believed that Abedi was instrumental in who played in the Black Stars during his time and for what period of time. Among those who suffered the blunt of his machinations was Prince Polley.

This player scored in almost all the matches he featured for the Black Stars but apart from the Germany match which he started, he was always brought in as a substitute while less endowed players were either playing full time or were made to start the game.

It is on record that it was this Prince who scored against Germany. No Ghanaian rose to his defence at the time as people are doing to Abedi's children who may be riding on the success of their father.

One of the problems of that era and which was wrong for team building was the fact that as a result of the alleged interference in the selection of players by the captain because he was dictating who he would like to play with otherwise he was not going to play, Ghana did not have a standing defence.

Tony Baffoe, who out of patriotism made a lot of sacrifices while playing for the national team had to complain at one time about the fact that he had to play with a different set of defenders any time he had to fly down to play for the Black Stars!

Akwasi Appiah has been very magnanimous to a player (Abedi) whose success rested on the scholarship by Akwasi's club Director without any strings attached but whose players later became the avowed enemies of Abedi when he became captain of the Black Stars.

If Akwasi were to be Abedi, the latter's children would not have gone anywhere near the Black Stars but he (Akwasi) has allowed them to be members of the team except for their non participation in the last AFCON. And yet people want to make it seem as if their absence is what contributed to our placing fourth.

Were they not in the team last year with a white coach when Ghana placed the same fourth? Is any fourth different from the other or is it the usual giving a dog a bad name to hang him?

Selection to any team is based on merit so if the Ayew brothers think they are not ready to don the national colours we should leave them alone but their return should not be made like the then management did to their father.

Their inclusion should be on current form else team work will be negatively impacted and Ghana will be the worse for it. Ghana abounds in football talents so let us not allow any person or group of persons to hold the nation to ransom as was the case in the 1990s when Abedi Pele was captain of the national team.