Emmanuel Kobladeku: A Creation Of The System 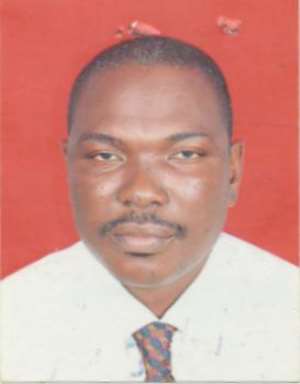 I knew Kassbohrer when we were still kids and trying to find our paths. Even though he could be half a decade older than I was, most of my friends were usually older than I was anyway. We regularly met at Viadenu's flourmill facility or installation, making five finger discounts of milled flour from customers, pilfering might be precise.

We placed the pilfered milled flour on the exhaust pipe of the flourmill,which baked it by the time the next customer's flour is completely milled (in the local parlance it was “azors,” in apparent inference from the English exhaust pipe). Like the nonconformists that we were, it was just fun having our own way and resisting attempts to stop us from such practices.

It's been so many years now and difficult to remember how our paths parted in those foundational eons. But I faintly recollect that by the time I was in class four or five, Kassbohrer must have been completing the Anlo Experimental Junior Secondary School (JSS), a model school after which the junior secondary concept was replicated across the country after a successful pilot.

He was a member of the pioneering group of students who were competitively selected across the locale for such the trial. Like the genius that he had always been, he excelled easily with flying colors in the JSS leaving examination and entered the Anlo senior secondary school, skipping two years of the five-year program.The gauntlet was then thrown to us (what might pass in the local adage as ekpo de miemegbeawodzi!)

Kassbohrer, however, dropped out of school for reasons I cannot explain in this eulogy. This underscores our understanding of life of experience as not simply given or as a track laid down in the living. Life is full of pitfalls and vagaries, it is fortuitous and unpredictable. But our greatest arsenal is the ability to get up again when we fall, dust ourselves up, and continue to march on as soldiers in the army of the Lord.

Kassbohrer never lost hope of returning to school to complete high school. Even in those heady days, he always saw education as a chute out of ignorance, deprivation, and a road to empowerment. He returned to the Zion College and continued from where he had left off in Anlo Secondary School. After two years of hard work and dedication, he passed the Ordinary (“O”) level examination with distinction, coming on top of his year group.

The American's have a soft spot for such men of honor who continue to blaze the trail to show others that it is possible no matter what the circumstances – Yes we can, their standard-bearer says! So the valedictory goes with its pomp and pageantry. I remember your constant reprimand to us your friends about the glory that awaits us after the hard day's labor.

Your unceremonious valedictory speech to us your friends after receiving your “O” level results and having a clear sight on where you were headed went thus: “the toils and the difficulties of cultivation are always dwarfed in comparison with the joy of the harvest time.”

At the Kpando Secondary School, where you enrolled for your two-year advanced (“A”) level examination, you again came not only on top of your class, butyou excelled as one of the best “A”level students in the Arts from the Volta Region on completion. I only heard from other friends that you were headed to the University of Ghana to pursue business administration forthe bachelor's degree.

By this time, the postmodern train had uprooted most of us from the moorings of our traditional locales and plunged us into the struggle to strain to cling to our very existence. The next time we met, it was over beer at the Commonwealth Junior Common Room of University of Ghana, you had completed your Bsc. in Administration and was looking for job. For things of the mind, you had always been first among equals.

As Aristotle notes, “we enter upon a stage which we did not design and we only find ourselves part of an action that was not of our making. Each man of us being a main character in his own drama plays subordinate parts in the drama of the whole, each drama constraints the other.” In your drama, you had always proved that it was possible. Your mental capacity was par excellence! I know when you graduated from the University of Ghana, you had confirmed yourself in many ways and waited for the society to validate you. It is sad to recollect your struggles even as a well-qualified unemployed graduate for many years.

Like Plato, you believed that if the ideal state is ever attainable, then philosophers must be kings of such a state – just men shaping the destiny of the just state. I forgot to remind you about the fluidity of such propositions as ideals that have long lost their meaning among men, especially in our locale.

Armed with this conviction, yours was not to jump ship to the safety of the shores (believing that after all with your educational record to earn you a place in any location in the world and you could spare yourself the drudgery). You were inspired by these ideals, believing that all the men of great stature were all idealist and still are in one way or the other. George Washington, Abraham Lincoln, Barack Obama and our own TorgbiWenya, idealist par excellence!

You plunged into the political arena, hoping that you could turn the table and turn things around for the struggling populace. But you soon forgot in the frenzy of the political muddling that Paulo Freire had already warned in his pedagogy that sometimes the oppressed do not even recognized they are under oppression.

When politics turned its ferocious fangs on you through the conspiracies of those you might consider unworthy for statecraft, I heard your subdued cry from within. That subdued cry was not for the self, but for the youth of the land, the people you thought you wanted to dispense your skills to assist in crafting diktats that would offer all and sundry a leveled playing field. The feeling for “brother man” as you had always said was borne out of your own experience as someone who struggled through school.Even as our political paths diverge, we still could reason at the dialectical level in meaningful ways. You meant well! Man proposes, but God disposes!

I remember our last meeting very well. I cannot say it all in this eulogy. You hard your turn around, not of hard luck but of structures that are meant to keep the hard working people like you down for fear of their impact. When computers were discovered, those in the business of the typewriter had to resist it for fear of it writing them out of business. You continued to say to me that a country that does not honor its hard working men and women would lose them to other countries. Those were the last words you said when we parted after some drinks.

I never knew it was the last I would ever see you again. I bet yours is not the Order of the Volta, we all know what you meant to us. I still have your “O” level mathematics notes in my things somewhere. When mathematics became an anathema, you came to the rescue. They are reminder of the single roots and traditions we originated from.

I am unsure if I can have time to author this in memory of anyone else, but yours was a young promising life lost in the mudslinging that makes it difficult to differentiate pure gold from the adulterated. And in moments like this, one is challenged to act.I know even in death, the thoughts of you should make society turn inward and question itself and what it places value on.

Dear Friend, fare thee well. May the lord brighten and comfort thy path in eternity.