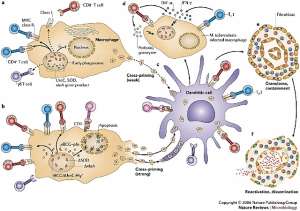 (CNS): For a disease as old of tuberculosis (TB) how come despite all the scientific research and development (R and D) we still have about a century old BCG vaccine which is the only licensed vaccine to prevent TB - it is used extensively with approximately 100 million newborns being vaccinated globally each year. While BCG can prevent severe forms of TB in some children, its widespread use in infants has failed to control the global epidemic. Sustained efforts have been made to develop new, safe and more effective TB vaccines over the past years. Results of one such effort were announced in The Lancet on 4th February 2013.

- Vaccine under research did not provide statistically-significant protection in preventing TB disease in infants previously vaccinated with BCG.

Although it is a good news that research was done with utmost precautions and ethical standards with vaccine under research getting well tolerated by infants, still we are disappointed because we were hoping to get a new, safe and effective TB vaccine at the earliest as it is unacceptable that people continue to die of TB (which is preventable and curable) even today.

This study result also warrants that efforts to develop new, safe and effective TB vaccine, diagnostics and drugs must be scaled up manifold. This also means governments and philanthropic agencies must increase their investment in TB R and D manifold. With current pace we are clearly not doing enough.

MORE ABOUT MVA85A
This TB vaccine study was a phase IIb clinical study evaluating the safety and efficacy of 'MVA85A' in preventing TB in infants. This TB vaccine under research was designed to boost immune responses already primed by the BCG vaccine, the currently licensed and widely used TB vaccine.

Data show that a single dose of MVA85A is not sufficient to confer statistically significant protection against TB disease or infection in infants who had been vaccinated at birth with BCG. There were 32 cases of TB disease in the infants that received BCG + MVA85A compared with 39 cases of disease among those receiving BCG + placebo. Non-significant vaccine efficacy was measured at 17.3% at study completion. The vaccine candidate also did not provide statistically significant protection from infection with Mycobacterium tuberculosis, the bacterium that causes TB, which was a secondary efficacy endpoint.

“Although the results of this first efficacy trial of a new TB vaccine are not what we had hoped for, further analysis of the data should reveal a great deal about how the body's immune system protects against TB and what is necessary to develop an effective vaccine,” said senior author Prof. Helen McShane, a Wellcome Trust Senior Clinical Research Fellow at the University of Oxford and the original developer of the vaccine. “The results from this study should let us know far more about the type and level of immune response required, and that will boost future efforts to develop an effective TB vaccine by Oxford and other researchers throughout the world. The difficulty of this task is one reason why there has not been a new TB vaccine since BCG was developed more than 90 years ago, but one is still urgently needed and I'm not about to give up now.”

This study was successful in that the vaccine was well tolerated, there was no evidence of any harm to the trial participants, and it gave a clear answer. This study also showed it is possible to conduct a large infant efficacy clinical trial in an area of high TB incidence with robust endpoints for detecting disease, something that is expected to greatly benefit future testing of TB vaccine candidates.

It is anticipated that further analysis of the data and samples collected will be conducted for information that may be helpful for the development of new vaccine candidates. For example, blood samples will be used to identify markers that can predict whether a child will develop TB disease in the future. These biomarkers are termed “correlates of risk” and may substantially aid the development of new vaccines and contribute to different trial designs in the future.

“Vaccine development is an incredibly difficult undertaking, and the scientific community has only become fully engaged in the development of TB vaccines in the last decade,” said Tom Evans, MD, Aeras interim CEO to Citizen News Service - CNS. “Because of the urgency to control the global TB epidemic, and despite these trial results, we remain steadfast in our belief that an improved TB vaccine will be developed and represents the best hope for eliminating the disease. The valuable scientific understanding gained from this trial will provide crucial information for the robust global portfolio of more than a dozen other TB vaccines undergoing clinical testing, a number that was unimaginable a decade ago.”

TB is an infectious disease that primarily affects the lungs and can be lethal if left untreated. Symptoms of TB disease can vary from person to person and by age, but may include a frequent, persistent cough (lasting three weeks or more), coughing up of blood, unexplained weight loss, decreased appetite, fatigue, fever, night sweats and chills, and chest pains.

Longer road lies ahead of us in our pursuit of safe and more effective TB vaccines. This also means it is the time to increase financing of TB research and development and improve TB control as best as we can.