THE JONATHAN ADMINISTRATION INCREASING CULTURE OF IMPUNITY AND INTOLERANCE 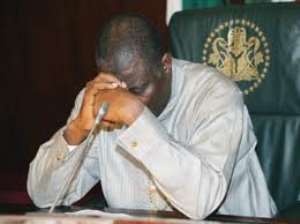 A couple of days ago, award winning Media Outfit, Channels Television, aired a Documentary revealing the decay and rot in the Premier Police Training College in Ikeja, Lagos, Nigeria.

Less than seventy two hours later, in a move that surprised many, the President paid an unscheduled visit to the College to see things for himself, and he did so without the Inspector General of Police and the top brass of the Force accompanying him. But when he said he in substance during the unexpected visit that the Channels Television Documentary was a calculated campaign to smear and rubbish his government, and that the Police College wasn't the only public Institution in the country, we knew that his Administration was up to something sinister in so far as the freedom of expression, thought, press and assembly are concerned. Truthfully, the President was right with respect to the Police College not being the only public Institution in the country, in fact, there are other Police Colleges in the nation; but what he failed to acknowledge or perhaps he doesn't know is that other public Institutions in the country, particularly the nation's Primary and Secondary Schools, and Universities are not any different from what is obtainable at the Police College. Indeed, some students have been wondering what is new about the Documentary as they have gotten used to living in such Hostels; after all, there is little or no difference between theirs and that of the Police College. He also probably doesn't remember that of the over N300billion earmarked in the 2012 budget for the Nigerian Police Force, less than N300million was apportioned for the sustenance of the Police Colleges in the country; and he probably doesn't know either that in the proposed 2013 budget, only about N281million out of the N311.2billion allocated for the Police Command is earmarked for the sustainment of the nation's Police Colleges. Our bet however, is that Channels Television chose to focus on the Police College because such environment and quarters in which the nation's police men are trained is largely responsible for their insane and bestial attitude towards their fellow citizens when they come out of training, and this is true for similar institutions.

Now, reports reaching us indicate that Channels Television was coerced by the Presidency to cancel its planned Conference on the Police College which was schedule for the previous day.

And though, we cannot independently confirm these reports; we have every cause to believe them because there is evidently a strong motive on the part of this Administration. The Administration tendency to suppress dissent has been growing by the day. If it believes the Documentary was simply a smear campaign rather than an altruistic effort to shape national policy, then, there is nothing it will not do to stifle such efforts. Not only that; this President told the nation and the entire world minutes after the October 2010, Independence Day bombings, that nobody knew the Niger Delta more than he did, and that the so-called Movement for the Emancipation of the Niger Delta (MEND) was not responsible for the attack, yet MEND undisputed Leader, Henry Okah and his close associates and elder brother, Charles Okah were arrested days later in connection with the bombings, and have been in solitary confinement since 2010; only few days ago, a South African Court convicted him on charges of terrorism against the Nigerian State. Meanwhile his brother and associates are yet to be released, even as some powerful ex-militants with close connection to the Presidency now turned Multi-millionaires by an Amnesty Ponzi Scheme are jubilant over the conviction. Something is certainly missing here. It is either the South African government is out to humiliate Nigeria or the present Nigerian government is in cahoots with the South Africa government and MEND to act out a well orchestrated script designed to hoodwink the Nigerian people and the International Community.

It is time this government ends this cycle of lawlessness, culture of impunity and increasing climate of intolerance. Enough is enough.