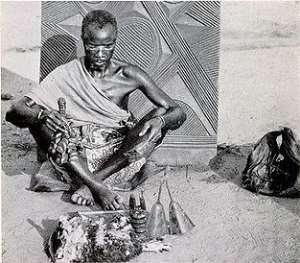 Unlike other religions, African religions have no sacred texts or creed comparable to the Torah, Bible or the Koran. Their expressions are found in oral traditions, rituals, myths, festivals, symbols and shrines. The primary role of Traditional African religion is to provide for human well being in the present, as opposed to offering salvation in a future world. Though beliefs and practices differ and vary across ethnic groups and regions, they have unifying themes. One single faith with local differences. For example, the Igbos of Southeastern Nigeria worship differently from the Yoruba of Southwestern Nigeria. The Akans of Ghana worship differently from the Dioula of the Ivory Coast. But they all believe in one super god, lesser divinities and in honoring the ancestors.

In a nutshell, traditional African religion is characterized by belief in a supreme being, who created and ordered the world, but is often experienced as distant and unreachable. Therefore, lesser divinities who are more accessible act as intermediaries with the super god. Violations of taboos or social norms are widely believed to result in hardships or illness for individuals or communities and must be countered by ritual acts to reestablish order, harmony and well being.

Believers of the religion hold that ancestors sometimes act as emissaries between living beings and the divine, helping to maintain social order and withdrawing their support if the living behave wrongly. If there are infractions, the oraculists are called upon to discern what is wrong and make recommendations on how to resolve it.

One of the contributions of traditional African religion to the continent is the preservation of the African languages. Unlike Islam and Christianity that came with foreign languages, indigenous African religion is conducted in the ethnic or regional language language where it is practiced, thereby strengthening the various languages. Moreover, it is the guardian of African moral traditions, through which moral sanctions flow. In most parts of Africa, people are more terrified of moral sanctions, than criminal sanctions.

Traditional African religion also followed African slaves to their new destinations. When African slaves came to the Americas, they carried their religious practices and beliefs with them. These beliefs evolved into Voodoo in Haiti and Santeria in Cuba. In the Brazilian cities of Salvador, Fortaleza, Recife, Porto and Alegre, indigenous African religion is still practiced.

*Dr. Leonard Madu is President of the African Caribbean Institute and African Chamber of Commerce. He is also a Fox TV foreign affairs analyst and writes from Nashville, TN.