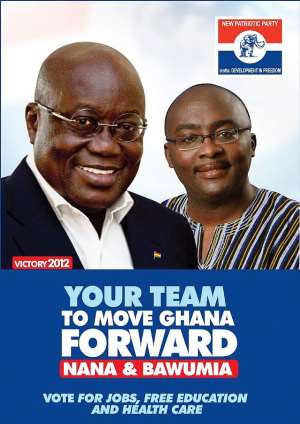 The need to win is hardwired into our genetic make up. Losing a contest is a lethal sign of rejection, and psychologically, it is very traumatic, and nobody wants to share a tangent with it if we can always have our way.

We have all been once gobbled by its insatiable appetite and spate out at the other end. It has probably happened numerous times; be it our escapades with the opposite sex, not landing a job that could have changed our life all over etc. It is part of life.

It's only a handful of people who are indifferent whether they win or lose. There are some who are unable to come to terms with that fact, and they take their own lives. Losing is a difficult fact of life, and I sympathise with those who have to face it on a very high profile stage.

Ghanaian politicians are notorious for corruption, verbal haemorrhage, incompetence, foul mouth and what have you. The adjectives and phrases that can be lined up to describe them are endless, and I hate to add another one to it – they are bad losers as well. Because they are used to buying votes at their congresses to guarantee the leadership of their party they are unable to come to terms with the fact that it is near to impossibility to guarantee success at the national election.

If we can hypothetically be able to read the minds of voters we will be surprised to see what determines their voting pattern. For example, how do you meet the need of a voter who cast his vote based on appearance? There goes the dream of a candidate whose appearance does not fit the bill.

In every election due to the zealotry of some supporters of all the political parties there are always voting improprieties here and there. It is not only democracies south of the Sahara that wrestles with such snags; it also plagues even well established democracies. The problem has its roots in our punishing desire to win.

Adu Boahen claimed that Rawlings rigged the 1992 election and for that reason boycotted the parliamentary election of the same year leaving the first parliament of the Fourth Republic without any credible opposition. I may dislike the political and economic tactics of Rawlings, but it worked like a spell on the people.

He genuinely won the hearts of the electorates by his populist all hands on deck attitude of helping workers to desilt gutters, laying railway tracks, sleeping in tents with poor farmers on the Afram Plains etc., besides the promulgation of the intestates succession law, the elimination of Onchocerciasis in the Northern part of the country and many more.

The icing on the cake was when he instituted the Farmers Day to reward hardworking Ghanaians in that important sector of our economy. The wonderful prices he parcelled out to recipients such as best farmer of the year, cocoa farmer of the year, fisherman of the year etc. endeared him to that part of the Ghanaian population, which accounts for about 60% of the electorates.

As I have said earlier we might not share his believes and vision, but his tactics worked and he won the election hands down.

In 1996 I believe they got the message, because there was no credible complain from the top brass of the NPP of any election malpractices. Thanks to the 1992 constitution, which stipulated only two terms for any sitting president, other than that Rawlings could have still won the 2000 election if the laws of the land had allowed it.

So Atta Mills of blessed memory stepped into the shoes of Rawlings and he lost to Kufour. He also complained bitterly that the NPP had rigged the election. My problem is how can the opposition rig election under the noses of an incumbent party? It doesn't make sense. Such claims expose the ruling party to outright incompetence, and it is laughable.

Kufour won the 2004 election hands down, therefore there was no claim of rigging as far as I can recall. But it all came to a full circle during the 2008 election when Akufo-Addo cried foul of NDC rigging the election.

This is my question again, how could the opposition party steal election from the ruling party? Were they sleeping on their watch? Your guess is as good as mine. Now, this is the conundrum.

If Akufo-Addo is now accusing Afari-Gyan of massaging the figures in favour of Mahama then he must know what he is talking about based on experience. If we have to accept what he is claiming then the EC commissioner did also massage the figures for the 2000 election which Atta Mills cried foul play.

I believe it takes a witch to know a witch. My brothers and sisters if we have to progress on that premise and extrapolate then Afari-Gyan is a de facto king maker who decides who becomes the president at any particular point in time.

Is any Ghanaian in his right mind ready to believe that? Prepare for Afari-Gyan's memoirs if he decides to tell it all. It will be juicy and interesting to read. This is my suggested title: The King Maker Of Ghana's Democracy.

The current claim by Akufo-Addo is preposterous; it is the same old time tune that sore losers want the population to dance to. It is a tired alibi. We can deal with all your vices, but please spare us this perennial childish tantrum.

We are not ready to share your emotional trauma. Don't try to censure anybody for your failure; you have yourself to blame for the indiscretion in the use of your language. Move on if you have lost, and make room for your fellow travellers. And please don't spoil the party for Alan Kyeremanten if he decides to run again.