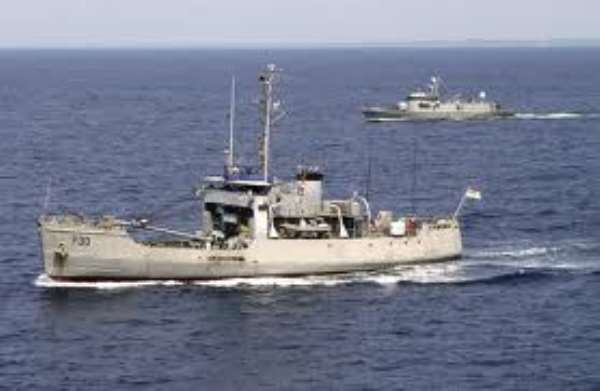 Sekondi (W/R), July 30, GNA - Two Warrior Naval ships on Monday arrived at the Sekondi Naval Base to augment the fleet of the Ghana Navy to enable it to discharge its duty efficiently.

The Chief of the Naval Staff, Rear Admiral Matthew Quashie, received the ships and expressed gratitude to the late President John Evans Atta Mills for resourcing the Navy to discharge its mandate effectively.

He described the former President as a visionary and pragmatic leader, who upon the discovery of oil and gas in commercial quantities in Western Region realised the need to augment the fleet.

He said the ships were purchased from Germany to enhance the effectiveness of the Navy to prevent internal and external aggression.

Rear Admiral Quashie charged the naval officers to work assiduously to justify the huge investment made by the government in resourcing them.

The Chief of the Naval Staff commended the crew for their steadfastness, resilience, teamwork and hard work throughout the journey.

The Flag Officer Commanding the Western Naval Command, Commodore Timothy Samuel Appiah, said the crew had spent three months of intensive training in Germany before their expedition to Ghana.