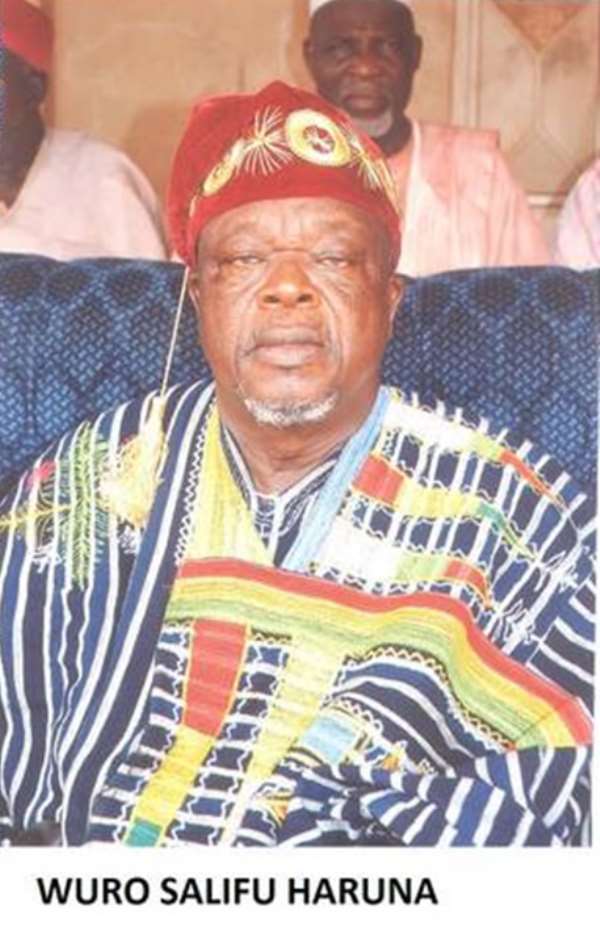 A seventeen member delegation including twelve Kotokoli Chiefs from the Greater Accra and other regions have called on the Agbogbomefia of the Asogli State, Togbe Afede XIV to thank him for his swift visit to Hohoe to intervene in the recent disturbances between the Gbi Traditional Council and the Zongo Community.

The twelve Chiefs were from Nima, Maamobi, Ashaley Botwe, Madina, Ahamansu, Dodowa, Ashaiman and Tamale among others.

The Greater Accra Regional Kotokoli Chief, Wuro Salifu Haruna, who deputized for Wuro Dawda Chedre Brenan II, the Kotokoli chief of Koue in the Nkwanta South district of the Volta Region and also the Paramount Chief of Kotokolis in Ghana, indicated that they were in Ho to thank Togbe Afede and other Chiefs in the Volta Region who are resolving the Hohoe crisis.

He said the Kotokolis and Ewes are brothers; hence they cannot sit down unconcern without visiting their brethren to commiserate with them.

Addressing the delegates at his palace, the Agbogbomefia of the Asogli State, Togbe Afede XIV said the recent disturbances between the Gbi Traditional Council and the Zongo Community should serve as a wake – up call to the two communities to place the national interest above their personal one.

Togbe Afede, who is also the President of the Volta Regional House of Chiefs said, such incidents were worrying and could destroy the peace that the country had enjoyed over decades.

He said the relationship between the Ewes and Kotokolis existed from time immemorial adding “I have memories of the relations between us”.

The Agbogbomefia of the Asogli State expressed delight at the presence of the delegation in Ho, adding that, it underscores the importance both ethnic groups attached to their relationship.

Togbe Afede told the Kotokoli Chiefs to be part of the peace process since it was a shared responsibility.

The delegation's next point of call was Hohoe, where they called on Togbega Gabusu to assess the impact of the clashes and to find ways of maintaining peace in the area.

Addressing the Chiefs, Togbega Gabusu said what happened was not a religious conflict but rather a display of insubordination and disrespect to authority.

According to him, the residents of the Zongo community have co – habited with the people of Gbi Traditional Area for over 200 years and that he was in the process of co-opting them into the Gbi Traditional Council.

He further revealed that it was the police that shot and killed two of the residents of Hohoe. Adding “if the police had acted on the intelligence they had earlier received; the clashes would have been averted”.

The Paramount Chief of Gbi Traditional area latter took the delegation around the palace to assess the damage caused by the Zongo Community.

Addressing the Zongo community later at the Hohoe Central Mosque, Wuro Salifu Haruna said they were in Hohoe as a measure of promoting peace between the two feuding factions.

He reminded the community; especially the youth that conflict should never be an option in addressing dispute.

He asked them to be mindful of the law and abide by it and therefore should always channel their grievances through appropriate authorities for redress.

Wuro Haruna reminded the youth that their forefathers have co-exited with the Gbis for years hence there is the need to emulate them, and to see themselves as natives of Gbi and live together in peace.

He advised them to return the items they took from Togbega Gabusu's palace to the Gbi Traditional Council this he said will go a long way to forge lasting peace in the area.