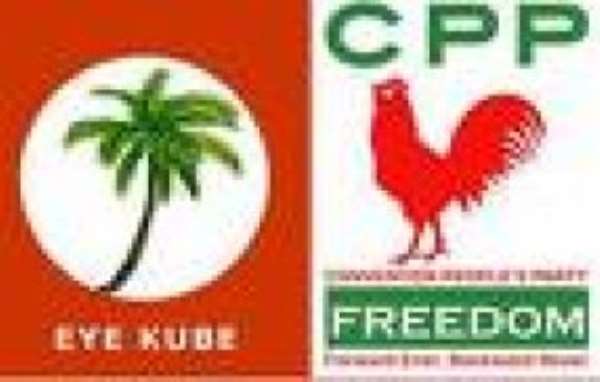 There are strong indications that the merger talks between the two Nkrumaist parties, the Convention People’s Party (CPP) and the People’s National Convention (PNC), hang in the balance, following the decision by the CPP to launch its manifesto for this year’s elections.

Expressing surprise and feeling betrayed at the recent development, the flag bearer of the PNC, Mr Hassan Ayariga, told graphic.com.gh that the move by the CPP smacked of a stab in the back of the PNC and an infringement on the gentleman’s agreement between the two to work towards a common political party.

But in a swift rebuttal, the General Secretary of the CPP, Mr Ivor Kobina Greenstreet, advised Mr Ayariga “to be responsible with his comments and not to do things to score cheap political points because the two parties are still working on the merger. We have every right to go ahead with all activities”.

According to Mr Ayariga, although he was elected in February this year, the PNC had shelved all activities, including the launch of its campaign, selection of running mate and outdooring of a manifesto, because the agreement was that the two parties would complete the merger talks and come out with a common campaign message, presidential candidate and running mate and a mutual manifesto and enter the elections as a united force.

On June 12, 2012, the CPP launched its manifesto in Accra, with strong messages of hope and prosperity for the party, as well as the entire nation.

The launch was on the theme: “Ghana Must Work Again…Yabre!”

Explaining why he saw the move by the CPP as “a stab in the back”, Mr Ayariga said the CPP did not even deem it fit to inform him nor had the courtesy to invite the PNC to the launch, adding, “Now it is clear that we cannot have a common manifesto, among others.”

“I am still committed to the merger of the two parties. It is for this reason that since my election in February this year I have shelved all activities and programmes so that when we finalise things we will face the elections with a united front. But it looks like we have missed this opportunity. We will always be available for genuine merger talks,” he added.

He explained that with the launch of the CPP manifesto, the PNC was left with no option but organise itself and launch its manifesto, select a running mate and also embark on a vigorous campaign to seek the mandate of the people of Ghana to bring relief and massive development to their doorstep.

Mr Ayariga stated that because the PNC had wasted a lot of time waiting for the completion of the merger talks, it would have to accelerate its moves to ensure that it got its message to the people and, to do that, the party would launch its manifesto and outdoor its running mate in July this year.

Mr Greenstreet, for his part, stated that Mr Ayariga must know that the CPP could not shelve all its re-organisation activities because the two committees of the CPP and the PNC were working on the merger talks and asked whether the PNC had halted all its activities.

If there are no last-minute moves to save the merger talks, they will be counted among the numerous attempts by the leaders of the two parties to present a united front in an election.

The leaders of the two parties have, on several occasions, made noise about their intentions to form a single party, but in all cases the unity or merger talks have come to naught.