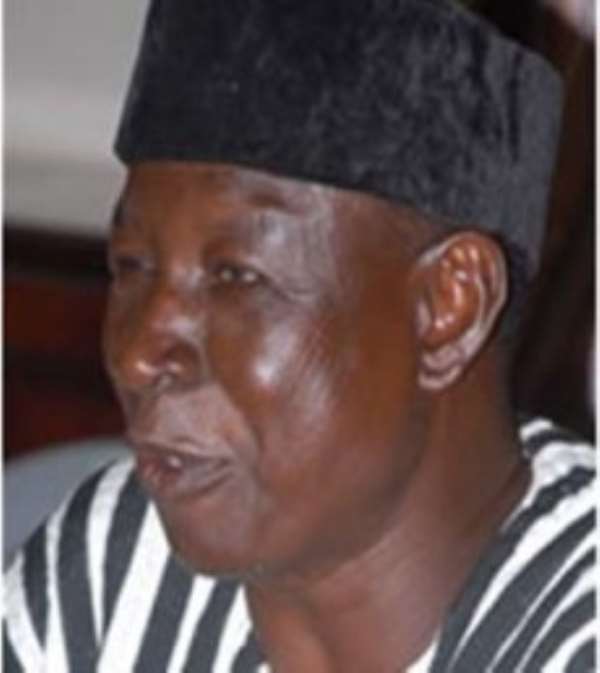 The Northern Regional Minister, Moses Bukari Mabengba, has been indicted by the chiefs and people of Nakpanduri for his alleged role in the recent skirmishes between Konkombas and Bimobas in the area, which have claimed three lives, with dozens of houses destroyed.

The aggrieved residents said they doubted the neutrality of the minister, whom they accused of backing Konkombas against them in the ethnic clashes when he was supposed to serve as head of security in the region.

They therefore called for the head of the minister, who is a Konkomba and has a history of making ethnocentric comments in previous conflicts involving Konkombas and other ethnic groups in the region.

At an emergency press conference in Nakpanduri Thursday, the residents wondered why Mr. Mabengba, since the genesis of the conflict, had been silent, indicating that it was obvious he was backing his tribesmen against them.

According to them, pieces of information gathered pointed to the fact that the minister was clandestinely behind the conflict, for which reason he failed to order the deployment of security forces to the area when it was needed.

Daniel Duut, Assemblyman for Nakpanduri South, who read the speech, bemoaned the selective justice in the arrest of suspects by the police, who were also expected to be neutral in the discharge of their professional duties.

He was particularly worried that the main architect of the entire arson, who boasted about having the support of Mr. Mabengba, was walking free while persons not linked to the violence were being harassed by the police and other security agents.

The Bimobas called for the immediate arrest of Sampson, the warlord for the Konkombas, if indeed he was not enjoying the support of Mr. Mabengba.

'We are aware the minister played a key role in allegedly fuelling this conflict,' he remarked.

The residents therefore expressed their doubts in his role to mediate in the crisis as Chairman of the Northern Regional Security Committee (REGSEC) and demanded that he step down for investigations to commence into his conduct.

According to them, with the minister at the helm of affairs, independent findings would be impeded, insisting that he must thoroughly be investigated to establish his culpability or otherwise in the matter.

To this end, they called on the police to thoroughly check all vehicles entering the area from Gushiegu as reports suggested Konkombas were bussed, alongside a stockpile of arms, into the area to support their brothers.

Meanwhile, the youth of the area are mounting pressure on traditional rulers to decline an invitation by REGSEC to a meeting in Nalerigu, claiming the Regional Minister's indifferent attitude did not merit the audience.

A visit to the troubled area by DAILY GUIDE revealed that persons rendered homeless were being accommodated in school buildings, forcing basic schools in the area to close down.

A military police patrol team had been put on the ground but residents said that the number was woefully inadequate, and as a result, some unscrupulous persons were looting property of displaced persons.

At the time of the visit, no relief items had been sent to the displaced persons though reports suggested that there were truck-loads of items dispatched to the area.

Three persons were confirmed dead in the renewed clashes between Konkombas and Bimobas at Kpemele, a farming community near Nakpanduri in the Bunkpurugu-Yunyoo District, which began early Monday morning.

Among the dead was an 18-year-old JHS pupil, identified only as Moses Diam, who was shot at close range by some unknown assailants.

The reprisal attacks however escalated early Tuesday as residents of Napkanduri were caught up in the crossfire between armed police and military personnel and some persons, in over one-and-a-half hours of shootout, in their attempt to enter Nakpanduri and cause havoc.

It would be recalled that renewed clashes between the two ethnic groups resulted in the burning down of about 100 houses, rendering over 2,000 persons homeless.

The recurring clashes between both groups had a remote cause, but Monday's dawn rage was believed to be over a parcel of land.

Five persons including Peter Labik, Jubika Peter, Komah Peter and Kisansu Janga Bilsa were reported to have been injured following gunshots, and were receiving treatment at the Baptist Medical Centre in Nalerigu.

A number of persons have been arrested in connection with the violence but the police are yet to officially comment on the arrest, as suspects are being detained in Bunkpurugu.