The Last Laugh: The Juju-Man And The Members of Parliament 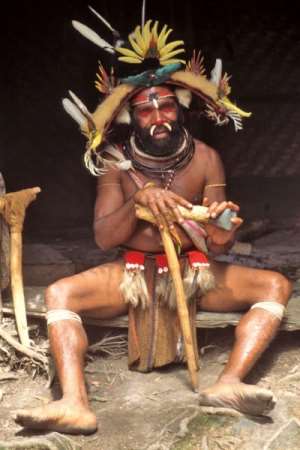 The year 2011 ended with remarkable improvement in Africans' discussion of their culture in relation to their progress. As the on-going enlightenment movement deepens, Africans are increasingly discussing the enabling and the inhibiting aspects of their culture in relation to their advancement. Roman Catholic Pope Benedict XVI dropped by and enjoined Africans to tackle the inhibitions within their culture that have been disturbing them. In Sierra Leone, Dr. John Leigh, a prominent politician and diplomat with the main opposition Sierra Leone People's Party (SLPP), in a major boost to the enlightenment movement, resigned from the SLPP, part of the reason being some party big-wigs involved in absurd juju-marabou ceremonies.

While some of the culture issues were atrocious, some frightening, some disturbing, and some instructive, in Ghana, where much of the African culture-progress discussions are most prominent, 2011 ended with big laughter when a Mallam (a Muslim spiritualist otherwise called marabou or Alpha-man in other parts of West Africa) threatened to “kill” some Members of Parliament for failing to honour their assurances to pay him after allegedly helping them spiritually to win the 2008 parliamentary elections.

As the Ghanaian mass media get into the forefront of the enlightenment crusade, there are searchlights into the activities of the much-feared juju-marabou spiritualists and their dark operations. “Mallam Threatens to Kill 8 MPs,” headlined the Accra-based Daily Guide. Mallam Katanka had told the Kumasi-based Ash FM station that he has given the eight defaulting MPs “two-week to honour their part of the agreement or he would strike them dead.”

Mallam Katanka, described as spiritually “dreadful,” reveals the problems juju-marabou spiritualists pose to Africa's progress. They do not talk about freedoms, the rule of law, human rights, social justice and any of the democratic tenets. For the juju-marabou spiritualists, to hell with character, merits, issues, policies, and programmes as the bases for electing candidates to parliament for Africa's greater progress. They allegedly use their spiritual crafts to charm Ghanaians/Africans to send all shades of people to parliament.

It was all laughs at the comments accompanying Mallam Katanka's spiritual terrorizations. Samples: “CAN YOU PLEASE KILL ALL MPs IN GHANA. NOT JUST the 8 MPs. THEY'RE ENTIRELY USELESS AND WASTE OF SPACE.”

“Ghanaians will go to the polls very soon, therefore this liar is just advertising himself so that people will go to him for help. Liar!”

“IS KILLING THE ONLY WAY TO DEMAND DEBT? JUJUMAN”
“Why did he not go to parliament himself? If he can make people win elections, then he can even become President! Fake spiritualist! Nobody should mind him. His claims are false and he is fake!”

“How many people did he kill to perform those rituals? He needs to be arrested and investigated.”

“President Mills has failed the country, so if you kill the 8 MPs add the President to make it 8 MPs+ 1 president=9 dead.”

“Our country is sick with all these crazy fetish priests and Mallams. Ah! It makes me wonder! Oh! So what's going on in our country? Our beloved country is in dire need of help; it needs great healers and real men of God. God's people need a revival and a saviour!”

“WHY HAVE YOU GIVEN THEM THE CHANCE TO STAY UP TO NOW. KILL THEM BEFORE I BECOME ANGRY.THEY ARE GREEDY MPs.”

“These are fruitless threats! Even God can`t kill! The MP`s should take it easy because nothing can happen to them. Juju is for primitive and uneducated people. We live in the 21st.Century! Juju has no power!”

“Go to hell Mallam with your stupidities.”
“Mr. Mallam, please kill all Ghanaian women if you have that powers. I strongly believe that those MPs are females, so please kill them all and don't spare them.”

Despite the mockeries, Mallam Katanka isn't laughing. The Mallam intends to teach the MPs some deadly spiritual lessons. Mallam Katanka said he shouldn't be “accused” as “being wicked when the said MPs die.” In pandering to the public sphere, Mallam Katanka plays into the superstitious public and send anxiety to the eight gullible MPs, who are stuck in such irrational believes, to honour their promises. How backward can things get in Africa's progress when MPs who are supposed to radiate light get entangled in an irrational, dark-minded juju-marabou man? Where is Ghana's/Africa's progress going?