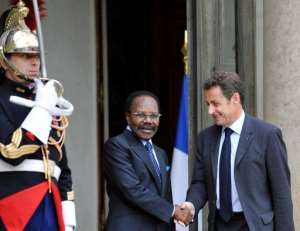 Mike Jocktane, who was a close aide to Bongo from 2005 and chief of staff in his office from 2009, confirmed claims that the former strongman sent briefcases stuffed with millions in cash to French politicians.

And he added that the practice continued after Sarkozy's election.

"When a French politician comes to Gabon, we say 'He's come for his briefcase'. The late president Bongo was very generous with French leaders," Jocktane said, according to the book.

"A good share of this cash ended up in their pockets," he added.

Robert Bourgi, a notorious bag man for France's interests in its former African colonies, said in September that he had brought Sarkozy's predecessor Jacques Chirac millions of dollars in cash from African dictators.

Jocktane confirmed this, but said Bourgi -- who acted as an unofficial advisor to Sarkozy after quitting the Chirac camp -- had also brought Bongo's cash to the current president, including before his 2007 election win.

Sarkozy is due to seek re-election next year, and has tried to distance France from its murky relations with its former colonies, but the claims by Bourgi -- and now Jocktane -- have revived the issue.