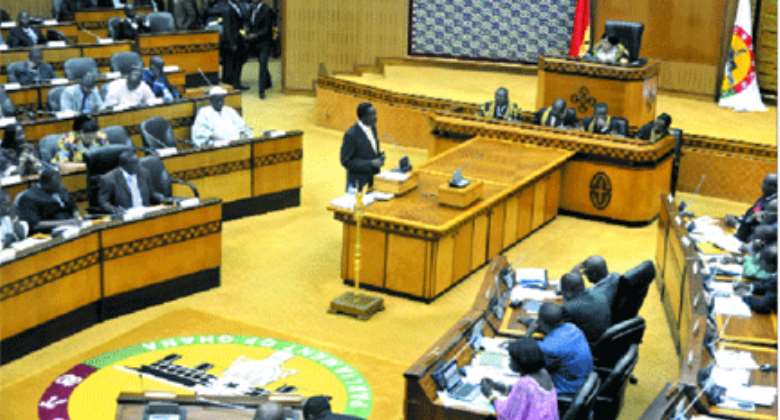 After weeks of heated debate both in and outside Parliament, which was characterized with acrimony and name-calling, Parliament Friday approved the $3billion Chinese loan to finance infrastructure development under the Ghana Shared Growth and Development Project (GSGDA).

The House was specifically recalled from recess to give its approval to the report of the Joint Committee on Finance and Poverty Reduction which dealt with the document after it had been referred to it by the Speaker on Thursday, August 25, 2011 before the House went on recess.

By far the facility is the largest single loan that had been contracted by any government since the country attained independence in 1957 and the government had not hidden the fact that the facility would contribute to provide a comprehensive and accelerated infrastructural development across the country.

During the debate, contributors from both the Majority and the Minority sides of the House acknowledge the fact that the country would need between $1.5 to $2 billion annually to fill the gaps in the country's infrastructural deficit.

And while both sides were of the opinion that the project was a good one, the Minority express reservation about the contents of the Master Facility Agreement (MFA) and the fact that the subsidiary agreements were not made available to the House for consideration alongside the MFA.

With these disagreements and reservations, it was therefore not surprising that when the First Deputy Speaker, Mr Edward Doe Adjaho put the question after a heated, which lasted for nearly four hours, the Minority side sat quietly while the Majority side approved the agreement with a loud “hear, hear”.

The road to the passage was not all rosy as the Minister of Finance and Economic Planning, Dr Kwabena Duffour had to withdraw the original document Thursday and replace with a new one which catered for some of the concerns that were raised by the Minority.

In the new agreement, the concern of the Minority that there was gaps in the agreement such as “to be agreed” or “to be inserted” in certain clauses were filled paving the way for the debate on the motion today.

Contributing to the debate, the Minority Spokesperson on Finance, Dr Anthony Akoto Osei intimated that in principle his side supported the initiative by the government since it was a fact that Ghana needed between $1.5 billion and $2 billion annually to fill its infrastructural gap.

He, therefore calmed the nerves of the chiefs of the Western Region explaining that the Minority was not against the development of the area as MPs from the region had portrayed.

Dr Akoto Osei said notwithstanding that it was important for the country to be vigilant to avert a situation whereby the benefit of the oil revenue “appears to go to our benefactor as far as this loan agreement is concerned”.

He referred to the STX Housing agreement adding that what had charaterised it of late was a clear indication that the House should had listen to the advice of the Minority during the debate to approve the deal.

“Mr Speaker, we should learn a lesson from that experience”, he said and cautioned the Speaker to be mindful of that fact he was presiding over the approval of a loan that would have a far-reaching implication on the country.

He stated that the gap that were filled in the new document were not the concerns of the Minority explaining that the approval of the MFA would mean the payment of $37.5million.

Dr Akoto Osei said it was unfortunate that the committee did not discuss the terms of the agreement and pointed out that the terms in the MFA document were different from what was contained in the report of the committee.

Referring to a Daily Graphic publication, Mr Nitiwul expressed concern that while the Dr Duffuor had told the President that funds had already been sought for the Achimota-Ofankor Road, the same project had been catered for in the MFA.

He pointed out that even though some facilities with the agreement were to be implemented on the Build, Operate and Transfer (BOT) basis, some allocations had been made for them.

When he took his turn, Mr Buah told the House that the use of part of the loan for the development of the gas infrastructure was a welcome news.

He explained that since gas was cheaper, it was the commodity that would be the driving force of the country's industrialization.

For Mr Asaga, he urged MPs from the Minority side to support the approval of the agreement arguing that the numerous project that would be embarked on in the region would provide employment for the people.

For his part, the Terkper explained that the MFA was rather favourable now that the country was considered as middle-income earner and urged the MPs to support its approval.

When he took the floor, the Minority Leader, Mr Osei Kyei-Mensah-Bonsu questioned whether the Minority was asking for too much by demanding for a better due diligence to be done before the approval of the agreement.

“Even though the proposal is good some aspect of the agreement stinks. We cannot join hands with the Majority to approve this facility in its present state”, he said and called on the Minister of Finance to take back the document and do a better feasibility before the agreement could be approved.

When he caught the eye of the Speaker, the Majority Leader, Mr Cletus Avoka stated that “we need to congratulate the President for his courage to go for such a facility”.

He stated that “if we look at some of the critical developmental challenges facing the country, we should be bold to bite the bullet”, he said.

Mr Avoka added that it was because of country's credibility rating that had enabled it to be considered for such a facility and called on Mps from both side of the House support its approval.

Winding up the debate, Dr Duffuor thanked the MPs for their inputs and promised that such suggestions would help to enrich the implementation of the project.

“The facility is the cheapest loan on could get in the world. We have taken into account all the concerns expressed by the Minority and have no doubts that all of you will support the motion on the floor”.

He assured the House that the STX project was not in danger”.