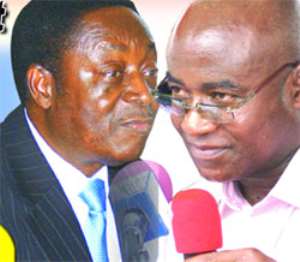 The Minority side in Parliament yesterday forced the government to withdraw the controversial $3 billion loan facility, which the House was supposed to debate and approve.

The Minority had raised a series of concerns regarding the loan, which is being sourced from the China Development Bank to prosecute a number of projects in the country.

Though the original agreement supporting the loan was withdrawn and replaced with a new one, the Minority decided to abstain from all the procedures the motion went through, to enable the House debate the deal today.

Earlier, the Finance and Economic Planning Minister, Dr. Kwabena Duffour, told the House that the concerns expressed by the joint committee in their report had been addressed by the  government, and that they were withdrawing the old document and substituting it with a new one to meet the requirements of the Minority.

The House accordingly adjourned for three hours to allow the committee more time to look at the new report submitted, and analyse the changes that have been effected.

On the resumption, the Speaker asked the House to consider the motion, but the Minority vehemently opposed it, insisting that not all members had a copy of the new report being circulated.

They insisted that the documents be circulated in the House, and the members be given ample time to study it, so that they would be adequately informed on the line of debate. They, therefore, suggested that the motion be taken today.

Minority Leader Osei Kyei Mensah pleaded that the members be given the opportunity to study it, because it was not a new report they were looking at.

He said if there had been a change in the new report they would have to look at it to see where the change was, and what it means to Ghanaians.

But Majority Leader Cletus Avoka was opposed to it, saying that the report had substantially not been changed, but just a paragraph of it had been amended on the last page of the original report, so he did not see why the House could not take the motion.

The Speaker, Doe Adjaho, asked that the House allow the Chairman of the committee to move the motion for it to be seconded, and then the debate be suspended till today.

The Committee Chairman, James Avedzi, accordingly, moved the motion, and was seconded by the Member of Parliament (MP) for Kumbungu, Imoro Yakubu Kakpagu.

The Committee observed that the goal of the facility was to enhance the efficiency and effectiveness of the oil and gas sector operations, value adding industrial minerals processing ventures, and agro industrial ventures.

The debate was suspended by the Speaker to today.