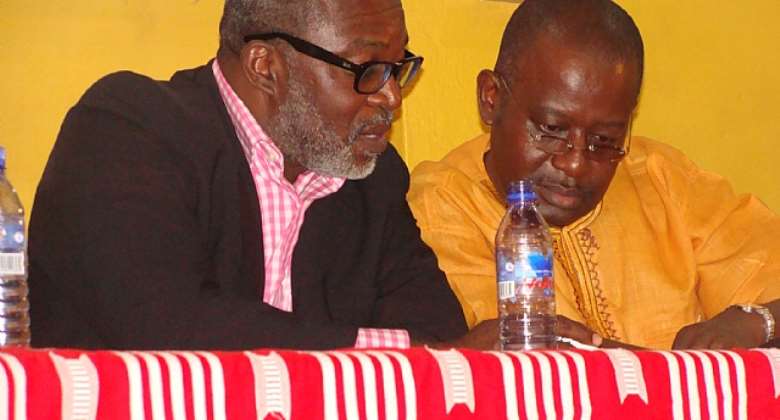 Parliament this week debates a Master Facility Agreement (MFA) on a $3 billion loan from the China Development Bank (CDB), targeted at transforming Ghana's infrastructure, with some minority party members already kicking against the deal, in a stand-off.

The MFA could not be laid before the House either on Monday or Tuesday because the Select Committee on Finance and Poverty Reduction could not finish with its report for consideration by the full House.

But even before the report would be laid, the Minority members have insisted that they needed further details on the various projects to be funded by the loan. This demand, however, has been played down by Deputy Minister for Finance and Economic Planning, Mr. Seth Terkper, who insists that members had already been provided with soft copies of the full details on the projects on pen drives.

The Parliamentary approval of the MFA is a precondition under Ghana's laws for entering into any international transaction, and therefore without that there would be no legitimate basis for the CDB to advance any loan to the country.

Mr. Seth Terkper, had stated in various interviews that the details of the subsidiary agreements, with particulars covering the various projects to be financed by the loan, would subsequently be made available for parliamentary approval.

The Business Analyst has gathered however, that after the various beneficiary sector ministries of the facility had briefed the Parliamentary Select Committee on Finance and Poverty Reduction on the subsidiary projects, at its sitting in Koforidua last week, only one member of the Minority side on the committee gave it the nod, with the remaining voting against it.

The $3Billion facility, which originated from an understanding reached between President John Evans Atta Mills and his Chinese counterpart when he visited China in September last year, is the largest single facility to be secured for the country at anytime and spans across various sectors of the economy.

The facility comes in two tranches of $1.5billion each at different interest rates.

The beneficiary ministries under the facility include the Ministry of Energy, whose newly-established agency, the Ghana National Gas Company (GNGC) stands to get the highest allocation of $700Million of the $3billion, for the development of the Western Corridor Gas Infrastructure Project.

Projects to be covered by the GNGC, under the facility, range from an offshore gas gathering pipeline; early phase gas processing plant, to be sited at Domunyili in the Western Region; onshore gas trunk pipeline, including a dispatch terminal at Pumpuni; Natural Gas Liquids (NGLs) processing retrofit at TOR, and procurement of Helicopter Surveillance Fleet.

The other beneficiary agency under the Energy ministry is the Bulk Oil Storage and Transport Company Limited (BOST), which is to construct a Western Corridor petroleum terminal at Pumpuni, also in the Western Region.

Another major beneficiary agency is the Ghana Railway Development Authority (GRDA) which benefits from $500Million investment towards the Western corridor Infrastructure renewal project towards the Takoradi-Kumasi and Dunkwa-Awaso Railway Line retrofit, under the supervision of the Ministry of Transport.

A $100million 'shared infrastructure and utility services' goes to the Ghana Free Zones Board (GFZB) for the development of the Sekondi Free Zones enclave under the watch of the Ministry of Trade and Industry. The enclave is being positioned to take advantage of the downstream petroleum sector, such as petro-chemical industries, fertilizer plants and residential housing to accommodate the growing work force in the western region arising out of the oil and gas activities.

A Coastal fishing harbours and landing sites redevelopment project, stretching from Axim, through Dixcove, Elmina, Winneba, Mumford, Senya-Bereku, James Town, Teshie, Tema, Ada, and Keta, to be undertaken by Ghana Ports and Harbours Authority (GHAPOHA) attracts $150Million and would be supervised jointly by the ministries of Transport and Agriculture.

Another project to be funded by the facility is the 'Eastern Corridor Multi-Modal Transportation Project,' to be developed by the Volta Lake Transport Company Limited (VLTCL), also under the Ministry of Transport, and is to be allocated $150million.

The escrow account would be held jointly by the Ministry of Finance and Economic Planning (MOFEP) and Bank of Ghana, with the CDB.

Meanwhile, the opposition to the deal has found expression in the Danquah Institute (DI), a policy advocacy group affiliated to the New Patriotic Party (NPP), which has called on Parliament not to approve the bulk amount, since it “finds it to be dangerous departure and watering down of Parliament's important constitutional role of financial scrutiny, for the $3 billion to be presented and approved in its omnibus form.”

The DI asserted that “Linked to this agreement are commercial off-take contracts with China for direct access to Ghana's share of oil from the Jubilee Field,” arguing “whilst the Chinese are under no obligation to agree to finance any of the specific projects contained in this omnibus $3 billion credit facility, we are still bound to supply them oil under the oil off-take agreements.”

This position of DI, which was carried in a release signed by its Executive Director, Mr. Asare Otchere-Darko, is however at variance with the very terms of the facility, which is a 'LOAN,' and therefore repayment does not arise if CDB does not advance any money to Ghana.

The DI questioned also the mode of repayment of the loan, saying 'under the escrow arrangement, the relevant permissible portion of the proceeds of crude oil sales under commercial contracts with the Chinese off-takers will be used to repay the $3 billion facility, which carries a total repayment cost, exceeding $4.2 billion.'

Below is the full statement by the Danquah Institute:

The Parliamentary Joint Committee of Finance and Poverty Reduction is currently meeting in Koforidua (Tuesday, August 16 – Saturday, August 20) ostensibly to scrutinize, among others, a US$3 billion commercial term loan facility between the Republic of Ghana and the China Development Bank (CDB) to finance a series of projects, including the Achimota-Ofankor Road, a $150 communications infrastructure for the National Security Council, and a $100 million capacity building exercise for Ghanaian SMEs.

The facility is being secured with crude oil sales proceeds, which will be paid directly into an escrow account to be established offshore, against the established legal arrangement which stipulates that Ghana's 100% income flows from oil and gas should go into the Petroleum Holding Fund at the Bank of Ghana.

However, this $3 billion omnibus loan facility is a very strange one which, in a very dangerous way, takes away the constitutional power of the legislature to scrutinize financial agreements presented to it for approval. It is the first time that a long list of project financing deals are boxed under one agreement, presented without any details of the specific projects involved and Parliament is being asked to endorse them for the Executive to go and negotiate the details with the lender. We think it is a dangerous precedent which Parliament ought not to allow.

What Parliament is being asked to do is to simply give its approval to a Chinese credit line of $3 billion and leaving the rest, the essential details that would determine the financial prudence of the transactions, for the Executive to handle.

Linked to this agreement are commercial off-take contracts with China for direct access to Ghana's share of oil from the Jubilee Field. However, whilst the Chinese are under no obligation to agree to finance any of the specific projects contained in this omnibus $3 billion credit facility, we are still bound to supply them oil under the oil off-take agreements.

Under the escrow arrangement, the relevant permissible portion of the proceeds of crude oil sales under commercial contracts with the Chinese off-takers will be used to repay the $3 billion facility, which carries a total repayment cost, exceeding $4.2 billion.

Also, is the $3 billion credit facility from China is essentially a commercial loan. It has been divided into two tranches of $1.5 billion each. The first tranche has a repayment period of 15 years, with the second tranche giving Ghana 10 years to repay the $1.5 billion and also at a commercial interest rate. Both facilities attract an interest rate of 6 months Libor + 2.95%, upfront fees of 0.25% per annum (or $7.5 million) and a Commitment Fee of 1.00% per annum ($30 million).

While we are not challenging the importance of some of the projects listed, including the Accra Plains Irrigation Project and the Coastal Fishing Harbours and Landing Sites, we find it to be dangerous departure and watering down of Parliament's important constitutional role of financial scrutiny, for the $3 billion to be presented and approved in its omnibus form.

We will therefore recommend to Government to withdraw this omnibus $3 billion facility from Parliament and, instead, present to Parliament for specific approval each of the projects involved with requisite details in order to allow the House to do proper financial and technical scrutiny to each project.