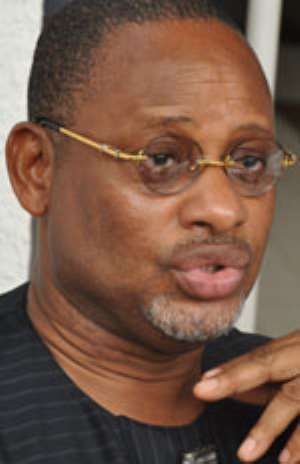 An aspiring governor of the Rivers State, Sir Celestine Omehia has asked the electorate to hold politicians to their campaign promise, in the event that they fail to deliver.

According to the candidate, promises made on campaign platforms signify a social contract that binds the politician and the electorate, and 'must be fulfilled' when voted and sworn into office.

'For instance, in a community located in a dry land, you promise a bridge, what does it mean? It is deceit of the people, but they will clap for you. The electorate should be able to know the difference between a lie and the truth. They should be able to challenge such a politician,' he said, adding 'every politician should keep his promise.'

Sir Omehia made this remark in Accra at the week-end, when he interacted with Nigerians, especially those from the Rivers State, to solicit for their votes in the upcoming general elections in Nigeria, scheduled to take place in April.

As the mantle of political office holders in Nigeria draws to a close, there is a build-up in the electioneering campaign in the West Africa country.

Sir Omehia, who is a former governor of the Rivers State faces stiff challenge from the incumbent, Rotimi Amaechi, to whom he lost the seat in 2007, as a result of a court ruling over their disputed primaries. One-time Minister of Transport, Dr. Abiye Sekibo, is also eyeing the seat.

Mr. Omehia, this time around, is vying for the governorship race on the ticket of the All Progressive Grand Alliance (APGA), having withdrawn from the ruling PDP.

He told The Chronicle that he makes sure that he is recorded when speaking on a political platform, to enable him have a 'quick impact program' to implement his promises when he wins the heart of the electorate and is sworn into office.

He advised politicians not to get angry when their people remind them of the promises they made. 'When you are being reminded of your promises, you must as a matter of necessity, dignity and honour put them into practical reality.'

His achievements he said are 'a fulfillment of my promise to the community.'

Sir Omehia is known for the diplomatic role he played in wooing investors to the Rivers State to create employment avenues for the jobless.

'In Nigeria and in most African countries, the youth are not involved in the daily administration of the country. They don't even know how policies are formulated and affected,' he said.

He told The Chronicle that he would create a forum for the youth when voted into office, with a mandate of coming out with ideas on what will influence the development and growth of the Rivers State.

He urged the Rivers State community in Ghana who are registered voters to go home and cast their votes for him and the incumbent President, Goodluck Jonathan, explaining that though the APGA is a national political party, it would not field a presidential candidate because members share the ideals and vision of the incumbent President.

A plaque with his picture embossed on it was awarded to him by a group called 'Nigerians in Diaspora for Omehia (NIDO)'. for his sterling performance as Governor and his contributions to the betterment of lives in the Rivers State.