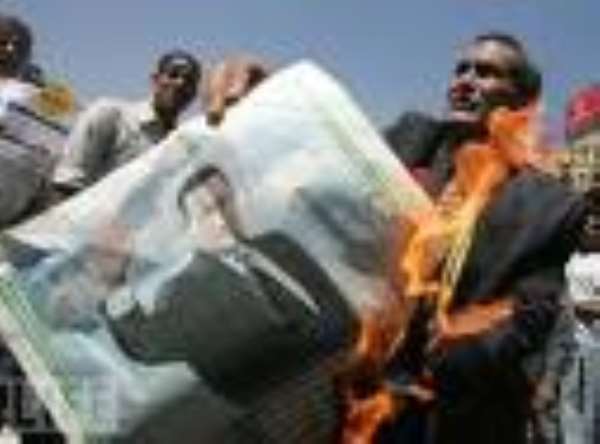 This indeed is the best sign ever in the histories of North of Africa and its inhabitants with those leadership that has perpetuated themselves into power for decades under the watchful eyes of the American and European that do believed in the tenant of democracy!

With Tunisia, taking the lead in turning the pages of the dreadful rules of those African –Arab leaders that are in the constant habits of misruling their people under the guide of religion of which the rights of the people are often trampers upon in disregards for their fundamental rights!

Unfortunately, with religious intolerance in these North African countries that has characterized their democracy for decades to the extend that the common citizen has no absolute say within their governance circle but to only turn to suicide as the only option is not pleasant for countries in the North!

Unfolding events has proven that the only option for the youths and adults are to take to the streets of their respective capitals for redress at the detriment of their very lives yet with the West asking for democracy reform when lives has been lost in the hundreds!

With this new wave of democracy in the North African must stand in solidarity with their down trodden brothers and sister as was the case in the then apathy regime in the Southern part of Africa that saw thousands of South African being exiled in many parts of the World!

The people of Tunisia, has today shown the way to the exist of tyranny leadership that are bent on suppressing their people under the guide of religion that you ought not to be disrespectful of the leadership even if they refused to create job opportunities, fair distribution of their country's wealth to name just a few!

From the courage mustered by the people of Tunisia today there has been an Interpol security alert for the arrest and detention of their former leadership and his billionaire brother in law is now seeking asylum in Canada!

From where I sit and analyse the situations in Cairo, Alexandria and Ismailiya concerning the demand of the less fortunate masses in the Egypt I am of the conviction that the leadership of that Nation need to go around because since the assassination of their former leader Sadat which brought the present leadership to power about three decades is not pleasant for the supposedly democracy there!

Hosni Mubarak has enjoyed the confident of the American successes leadership to the extend that billions of the American tax monies go there in the form of military hardware because of her strategy location when its come to the Israeli Arab conflict!

This gentleman has had his part and I think it is about time that he allows democracy to prevail because from all indications he has stocked up enough for him and his extended families and cronies for decades to come which they will not be in want no matter what!

The role now bent played by the military in Egypt is the best because the signs are written on the wall that the will of the people must prevail and as such the people need to take their destinate into their hands because power to be will not help them achieve same because of their interest in the leadership and not necessarily the people due to her present position on the African continent .

Just to borrow from the American “In spite of the turmoil, one or two things are becoming clearer here. It looks pretty likely that President Mubarak and his military leaders have been told in no uncertain fashion by the Americans that the Tiananmen Square option, by which the authorities restore order by shooting the protestors down by the hundred, is simply not acceptable”.

Is about time, that the demonstrators in Egypt continue their struggle for their betterment and don't allow any power to influence them until their request for the change of power regime be the order of the day to give the ordinary citizen of Egypt a better livelihood!