IN THE WAKE OF DEFIENCE WHAT AWAITS GBAGBO? 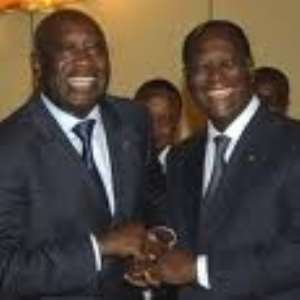 As pressure mount on incumbent President Laurence Gbagbo whose loses the November runs off elections between he and Allasana Quattera of which Gbagbo has out right defied the international community indicating that the unfolding events in the Ivory Coast is purely internal and no absolute outside interference will be taken lightly to the extend that he and his supporters.

One thing that keep observers wondering is that in the face of mounting pressures from regional and world bodies including the African Union, Ecowas, United Nations, European Union Gbagbo and his supporters continue to hunt down people from the North and those the Gbagbo camp considered in alliance with the Quattera camp and killing them in cold blood!

Should this mean that, the West is waiting to see thousand perish at the hands of these desperate lunatic killers as was done in Liberia, Guinea and the Sierra Leone before they decide to move in and bring the situation under control since in face the United Nations has over fifty thousands troops stationed in the Ivory?

Again isolating Gbagbo and his visual killers plus his inner circles is good but failing to apply the practicalities is the more dangerous aspect of their good intention because from the look of things Gbagbo ears and mind is closed to any good advices and only awaiting the unexpected by it assisnation, arrest, full scale war, his very loyal police military and the disenchanted youth turning the muzzles of the guns on him!

If the United Nations, France that have thousands of troops on the ground are very serious with the danger Gbagbo and his men post to the vulnerable people of that once beautiful and peaceful land that served as the haven of rest and financial fortune for those who believed in earning better living must do something very ordinary to save the lives and properties since the situation has not degenerated to an uncontrollable stage!

The decision of the Prime Minister of Kenya Raila Odinga indicating that Gbagbo must be force out of power should be taken very serious because he is speaking from experience that saw countless of his fellow compatriots dying in cold blood because of this same power greed!

With Gbagbo asking the United Nations and her allies to leave the Ivory Coast is a cleared indication that this gentlemen and his hang men don't believed in any compromised in the flaming situation they have created and shelling the hotel that hot the present President of Ivory are clear signs written on the walls that the international community need to hasten their steps to bring the situation under control!

Should incumbency power that are so entrenched in many African leaders of which they see nothing wrong with whatever done to the mandates of the people but to perpetuate themselves in power as in the case of the Ivorian former president Laurence Gbagbo because as far as the World is concerned he is the former president as Quatterra is only waiting for his official turning over ceremony with Gbagbo in attendant!

I mean the West was very vocal in the Charles Taylor saga and every efforts was exhorted in making sure that he was brought to his knees to see himself in the Hague facing the full width of the laws according to the allegations level against him! This is in no contra to what is unfolding in the Ivory Coast and moving in now to safe lives and properties will be in the best interest of the suffering people of the Ivory Coast.

France, America and the United Nations must act now to bring sanity to the suffering people of Ivory Coast because Liberians as I write is playing host thousands of their Ivorian mothers, fathers, sons and daughters in reciprocating the same gestures Ivorian accorded the people of Liberia when their nightmare drove them in the Ivory Coast! Delay are dangerous and acting now to remove this West African tyrant will be in the best interest of the inhabitants of the Sub-region yea the people of the Mano river union.

Forbes names Akufo-Addo 'African of the Year'
6 minutes ago