THERESA MILLS IS SHE A FINE EXAMPLE?? 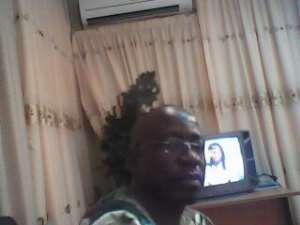 In the African governmental settings the first family are considered the goddess and rein supreme in all of their undertaking where ever they surface be it visiting public places and at major functions as has been the custom in almost all parts of the African Continent.

As far back as my memory can served me, Liberian in all sincerity has been serving their presidency with supremacy attitude to include the extended relations of the one that occupied that unique office that is housed in what is referred to as the Executive Mansion.

Indeed, Ghana the first independence Nation in Sub-Sahara Africa has proven this theory wrong with the first lady Mrs. Theresa Mills been the an fine example that order African family need to emulate in this African geo-political dispensation.

The first Lady, was seem in a waiting cue at Ghana's referral teaching hospital known as Kolabu at one of the suburb of Accra accompanying the brother of the President of Ghana his Excellency Professor John Attah Mills to see doctors for treatment.

The security that accompany the first Lady was asked by her to wait outside as she took the file containing the medical information for her brother-in-law to the cashier to pay at the window and unaccompanied or assisted by any personnel's at the hospital!

What was more surprising was that the head Doctor that was to attend to the patients in the cue outside his office came out of his office to crossed checked wit the nurses and upon greeting the patients he then recognized the first Lady and only greeted her and asked her how is the President and simply walk back to his office without breaching the protocol by inviting her ahead of all the other patients that has been there hours waiting for the Doctor!

The Ghanaian first lady waited in the cue for closed to four hours with her brother-in-law the brother of the President of the Republic of Ghana like any other ordinary citizen that entrusted them with state power! What was actually surprising was that security assigned to her never attempted to go against her wish as is often seem in most cases especially on the African continent for what the security details will often referred to as according the first family maximum security because of would be assassin!

The dramatic event that took place in Accra which actually beats my imagination giving the fact that this too is an African nation that has opposition political parties, disgruntles citizens who are never satisfied like any other African country first Lady could merger with the commoners especially in a government hospital is far from reality in any most parts of the African continent!

Can other African first lady or first family take to the challenge put forward by the Ghanaian first Lady as she demonstrating in the highest degree of her love and concern for the very people that trusted them with their mandate to control their resources?

Not only the first Lady but indeed her husband His Excellency John Atta Mills too demonstrated a high sense of human when he refused to take his presidential budgetary allotments for a foreign trip as provided for in the Ghanaian budget!

The law Professor told his fellow compatriots that he doesn't need the allowance because according to him was invited by another leader and as such will be provided with lodging, foods, transport etc! President categorically said that he preferred the money going to the less fortunate homes to the upkeep of the children there. This indeed shows that Ghana not only being the first African independence republic but an example to emulate because this style of leader is very scar on the African Continent.