The concept of fasting in Islam 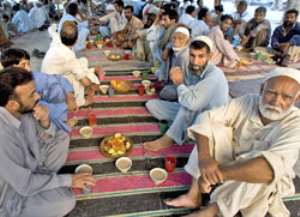 Once again, the month of Ramadan is here with us and Muslims all over the world are engaged in twenty nine or thirty (29 or 30) days of fasting to please the Almighty Allah. On occasions such as this, it is important to remind ourselves of our responsibilities so as to derive the maximum blessing from Allah.

Fasting as is a unique moral and spiritual characteristic of Islam. Literally defined, it means to abstain completely from foods, drinks, sex and smoking, before the break of dawn till sunset, during the entire month of Ramadan, which is the ninth month of the Islamic Calendar year.

Allah has said in the Holy Quran; 'O ye who believe! Fasting is prescribed for you, even as it was prescribed for those before you, that ye may ward off evil' (Quran 2: 183).

Here are some explanations of the spiritual meaning of fasting in Islam: -

1)    It imbues man with a genuine virtue of effective devotion, honest dedication and closeness to God, because when one fasts, he does so for the sake of God only.

2)    It cultivates in man a vigilant and sound conscience, because the fasting person keeps his fast in secret as well as in public. In fasting, there is no mundane authority to check man's behaviour or compel him to observe the fasting. He keeps it to please God and satisfies his own conscience by being faithfully in secret and in public.

3)    It teaches man the principle of sincere love, because when he observes the fasting, he does it out of deep love for God. And the man who loves God truly is a man who really knows what love is.

4)    It equips man with a creative sense of hope and optimistic outlook on life; because when he fasts he is hoping to please God and is seeking His Grace.

5)    It indoctrinates man in patience and unselfishness, because when he fasts, he feels the pains of deprivation but endures patiently. Truly this deprivation may be only temporary, yet there is no doubt that the experience makes him realize the severe effects of such pains on others, who might be poor. The meaning of this experience in social and humanitarian sense is that such person is much quicker than anybody else in sympathizing with his fellow men and responding to their needs.

6)    It originates in man the real spirit of social belonging, of unity and brotherhood, of equality before God as well as before the law. This spirit is due to the fact that when man fast, he feels that he is joining the global Muslim society in observing the same duty in the same manner at the same time for the sake of God to the same end.

7)    It is a Godly prescription for self-assurance and self control, for the maintenance of human dignity and freedom, for victory and peace. When he fasts in the proper manner, he is in control of himself, exercises full command over his passions disciplines his desires and resists all evil temptations.

WHO MUST FAST?
The fasting of Ramadan is compulsory upon every Muslim male and female who has the following qualification.

Allah has said in the Holy Quran; 'The month of Ramadan in which was revealed the Quran, a guidance for mankind and clear proofs of the guidance and the criterion (of right and wrong). And whosoever of you is present let him fast the month and whosoever of you is sick or on a journey (let him fast the same) and (he desireth) that ye should complete the period, and that per-adventure, ye may be thankful.' (Quran 2:185).

EXEMPTION FROM FASTING
1.    Children under the age of puberty.
2.    The insane people who are unaccountable for their deeds. People of these two categories are exempted from the duty of fast and no compensation or any other substitute is enjoined on them.

3.    Men and women who are too old and feeble to undertake the obligation of fast and bear its hardships. Such people are exempted from this duty but they must offer at least, one needy poor Muslim an average full meal or its value per person per day.

4.    Sick people whose health is likely to be severely affected by the observance of the fast. They may postpone the fast, as long as they are sick, to a later date and make up for it later.

5.    People in the course of travelling of distances about fifty miles or more. In this case such people may break the fast temporarily during their travel only and make up for it in later days. But it is better for them, the Quran says, to keep the fast if they can, without causing hardships.

6.    Expectant mothers and women nursing their children may also break their fast, if its observance is likely to endanger their own health or that of their infants. But they must make up for the fast later.

7.    Women in the period of menstruation (of a maximum of ten days) or of confinement (of a maximum of forty days). These categories of persons are not allowed to fast even if they can and want to. They must postpone the fast till recovery and then make up for it later.

It must be noted that the fast of any in Ramadan becomes void by intentionally eating, drinking, smoking or indulgence in sex and allowing any thing to enter through the mouth into the interior part of the body. And if this is done deliberately without any lawful excuse, the penalty is to fast for sixty consecutive days or as an alternative feed sixty poor persons sufficiently.

GENERAL RECOMMENDATION
It is strongly recommended by the Holy Prophet Muhammad (Peace and blessings of Allah be upon Him) to observe the following practices especially during Ramadan: -

2.    To observe the supererogatory prayer known as 'Taraweeh'

4.    To increase study and recitation of the Holy Quran.

5.    To exert the utmost in patience and humbleness.

6.    To be extra-ordinary cautious in using the senses, the mind and especially the tongue to abstain from careless and gossip chats and avoid uttering profane statements.

It should be noted that Allah has promised to reward the fasting Muslim manifold without measure. In this regard the thirty days fasting period during Ramadan has been divided into three parts for blessings as follows:

For the first ten days, Allah has promised to grant mercy to all Muslims.

The second ten days for forgiveness and the last ten days stands for salvation from the torment of fire – hell.

May Allah grant us the courage and will power to be able to perform his obligations bestowed upon us without much difficulties. It is my fervent hope and prayer that the spirit of Ramadan will usher in the much needed peace in all conflict areas in Ghana and the world at large.

May the Peace and Love of Allah be upon all Believers – Amen.