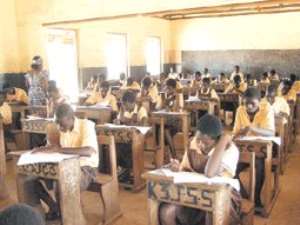 The 2010 batch of candidates writing the Basic Education Certificate Examination is the first to sit the examination under the 2007 Education Reform and the junior high school system. The junior Secondary School concept replaced the middle school system following the 1987 Education Reform. The 2007 Education Reform which implemented recommendations of the Anamuah Mensah Committee on Education changed the name from junior secondary school to junior high school. The first batch of students was admitted into the new system in September 2007 and they are those currently writing the BECE. Unlike the change from the middle school system to the JSS, the change from JSS to the JHS concept has very little differences in the content of the programmes.

Pre-vocational Skills has been combined with Pre-Technical Skills into Basic Design and Technology while Religious and Moral Education and ICT were initially excluded from the list of examinable subjects. This means that while the JSS system had as many as ten examinable subjects, including French, those sitting this year's BECE will write a maximum of seven subjects and six subjects for those schools that do not offer French. However, due to the agitation that came in the wake of the hacking of Religious and Moral Education from the syllabi, authorities in the education sector have included RME and ICT in the examinable subjects and this will take effect from next year.

Due to these gaping disparities in the educational system, some pupils, school authorities and parents will do anything, including dishonest means to get placement into the first class senior high schools in the country.

The manual mode of selecting candidates into the senior high schools was highly criticized for been fraught with corruption, nepotism and favouritism and this necessitated the introduction of the Computerized School Selection and Placement System. This means that one's ability to get one's school of choice depends solely on one's performance in the B.E.C.E. This, coupled with the desire of schools to be on top of the examination league table, has intensified examination malpractices, a phenomenon which is threatening the integrity of the exams, the West African Examination Council and the nation at large. These malpractices range from impersonation, leakage, and cheating in the examination halls, among others. As a way of lessoning the impact of the unhealthy competition on the exams, WAEC has directed the Ghana Education Service to stop publishing results of examinations.

The exams council, through the WAEC Law, has also introduced stiffer punishment for students who cheat in examinations. However, the success, integrity or otherwise of the 2010 B.E.C.E. depends on the corporation from the invigilators, school authorities and candidates. Education goes beyond passing examination. The corrupt practices that have conscripted every facet of our national lives to a large extent depend on the values imbued in such corrupt officials in their formative years.

Helping pupils to pass examination through dubious means is a way of telling them that there is always “another way” of achieving one's aim. They will ultimately grow to become a bane of national development. This is what should guide all interest groups in the 2010 B.E.C.E. Candidates should also beware of fraudulent characters parading as “Apor Doctors.” Candidates should note that the only genuine tips or “apor”for the examination is what they have been taught in the nine years of their basic education.

Good luck to all B.E.C.E. candidates.
Credit: Manasseh Azure Awuni [www.maxighana.com] Email: [email protected] The writer is the SRC President of the Ghana Institute of Journalism and Press and Information Secretary of the Northern Students Union(NSU). To read more of his writing, visit www.maxighana.com