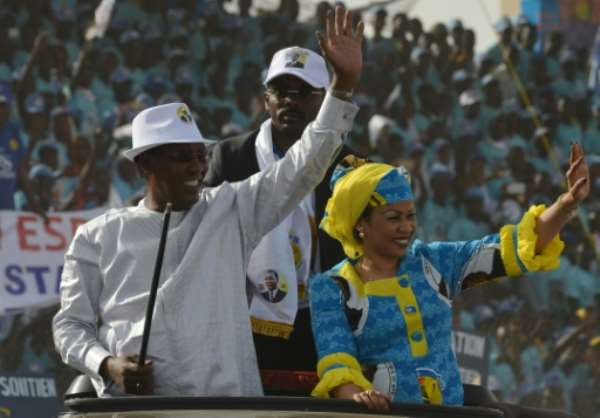 N'Djamena (AFP) - After 26 years in office, Chad's warrior president Idriss Deby was set for a fifth term after being declared winner of an election the opposition said was marred by widespread fraud.

Deby won 61.56 percent of the vote in the April 10 presidential election, followed by the opposition's Saleh Kebzabo, who garnered 12.8 percent, according to provisional results released by the national election commission (CENI) Thursday.

Gunfire rang out in N'Djamena through the night as Deby supporters and the ruling Patriotic Salvation Movement (MPS) celebrated his victory on the vast city square opposite the presidential palace.

"Enjoy your victory," Deby said on briefly stepping out onto the square. "But do not take over the street," he warned.

The city was quiet on Friday with police and members of the presidential guard deployed at all major crossroads after scathing criticism from opposition leaders on the vote.

Eight opposition leaders including Kebzabo who had alleged ballot-stuffing and trafficking in voter cards were meeting in the capital on Friday to discuss a response.

"Hundreds of ballot boxes have disappeared," the group had said, adding that soldiers who had intended to vote against Deby had also gone missing and had likely been "arrested and imprisoned".

The opposition has solid support in the city's poorer districts as well as in the heavily-populated south of the country.

The Constitutional Council has two weeks to validate the provisional results.

More than six million people had been asked to choose between 13 presidential hopefuls in the vote, with turnout pegged at more than 71 percent.

During the polls there was an online blackout with the Internet cut and mobile phones unable to send messages.

Earlier this month, four civil society leaders were handed four-month suspended sentences for urging anti-government protests ahead of the vote.

The government had banned demonstrations after protests erupted in February over the gang rape of a teenage girl, blamed on the sons of top figures in Deby's regime.

Four days after the ban, a student was killed and five wounded when police opened fire to break up a protest at Faya Largeau in the north.

Deby's election also came as staff at several hospitals, schools and universities were on strike over weeks of unpaid wages.

Under Deby -- who took power in a military coup -- once unstable Chad has become both an oil producer and a key player in the fight against jihadist groups on the rampage in west Africa.

But despite a wealth of new oil resources since 2003, half of the population of 13 million live below the poverty line and seven out of 10 people cannot read or write.