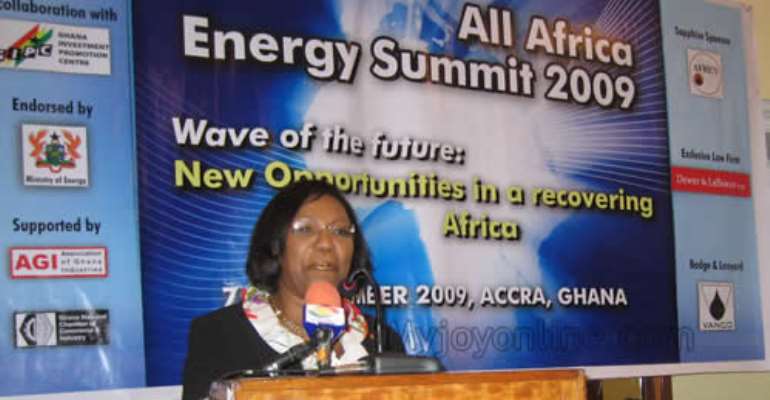 Listen to Mrs Betty Mould Iddrisu, the Attorney-General and Minister of Justice in the attached audio.© Copyright myjoyonline

Mrs Betty Mould Iddrisu, Attorney-General and Minister of Justice on Tuesday served notice Ghana will defend her inalienable right to 'know' who partners the country to explore her discovered oil.

She said this is essential because under Ghanaian laws, “the rights to petroleum existing in its natural state within the jurisdiction of Ghana is the property of the people of Ghana vested in the Government” and that no other entity can dictate who that partner should be.

Mrs Betty Mould Iddrisu was addressing an All Africa Energy Summit 2009 on Tuesday at the La palm Royal Beach in Accra, and explained that PNDCL 84 provides a framework for the management of oil and gas exploration, development and production and makes it clear that all petroleum existing in its natural state is the property of Ghana, and also that the exploration, development and production of petroleum shall be done only in accordance with the terms of a petroleum agreement that is regulated and executed with the Minister of Energy and the interest acquired cannot be assigned to any other person without the prior consent in writing of the Minister of Energy.

This means that at all times, GNPC must know who its partners in exploration are and approve of them, she emphasised.

The two-day international seminar is under the theme; Wave of the Future, New Opportunities in a Recovering Africa and organised by Magenta Global, an independent business media company in collaboration with the Ministry of Energy. It is also supported by the Ghana Investments Promotion Centre, the Association of Ghana Industries, the law firm Dewey & LeBoeuf, VANCO Energy Company, the Ghana National Chamber of Commerce and AFREN, an independent oil and gas exploration and production company.

The Attorney-General observed that the law provides the basic terms of every Petroleum Agreement. “It also spells out the rights and objectives of the parties and the sanctions to be applied in case of breach.”

“Flowing from PNDCL 84 is the Model Petroleum Agreement, a standard agreement that is negotiated between the Government and all prospective investors in upstream operations.”

The A-G said Ghana ought to rapidly make the transition from a country competing to attract valid oil and gas investment into one that is a major producer, given that the Jubilee and Tweneboa oil fields boast of great potential and threaten to place Ghana among the major oil producing nations in West Africa.

The rapid transition, she said, needs to be skilfully managed to vastly improve the largely inadequate legal and regulatory framework law presently in place if the country was to avoid the pitfall other countries in the region have fallen into.

She said the Government has set itself the goals of maximising the country's revenue from the oil and gas discoveries, the effective management of oil and gas operations to ensure the proper development of the oil fields, maximising the participation of Ghanaians in the industry to facilitate job creation and inducing transparency into the nascent industry in Ghana.

“There are many aspects to an effective transition, but one indispensable component is the establishment of a solid legal framework to ensure that Ghana's interests are maximised and fully protected. Ghana must approach the industry from a position of legal strength, and we must confront head-on the legal challenges of becoming a major oil and gas producer.

“In the light of this it is imperative that Ghana's legal regime relating to the oil and gas industry is reviewed and adapted to Ghana's new condition as a major oil producer. This may entail the following:The review and update of the Petroleum Exploration and Production law PNDCL 84.
The issuance of Petroleum Regulations in accordance with PNDCL 84.
Review and update of Ghana's Petroleum taxation and revenue laws.

“The current stabilisation clauses may also have to be looked at again since they are too broad and were incorporated at a time when Ghana did not know its oil and gas potential.”