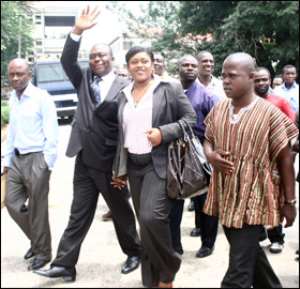 An Accra Fast Track High Court, presided over by Justice Charles Quist, has ordered that the passports of Mr. Stephen Asamoah Boateng, aka Asabee, former Minister of Information and National Orientation, and his wife, Zuleika Jennifer Lorwia, a businesswoman, be submitted to the court registrar.

Giving reasons for the order when the couple appeared before him yesterday, Justice Quist observed that Asabee and his wife had attempted to travel out of the country on two occasions but were stopped by the Bureau of National Investigations (BNI).

He said he would review the order after two months while he adjourned the case to August 25, 2009.

The Attorney General, meanwhile, has withdrawn an earlier charge sheet in which nine charges were preferred against Asabee and five others, substituting it with a fresh one with 14 charges. The AG also added three more accused persons to the case.

Based on this new development, eight persons, including an entity, were charged at an Accra Fast Track High Court for allegedly conspiring to contravene the Procurement Act by not following due processes in obtaining a contract amounting to GH¢86, 915.85 for renovation works at the Ministry of Information.

The 14 charges levelled against them included conspiracy to commit crime, contravention of provisions of the Public Procurement Act, attempt to commit crime, forgery of official document, possession of forged document, and altering of documents.

Prosper Aku was also charged with four counts of possessing and forgery of document of architects, engineering certificate and false tender document. Dominic Sampong was charged with conspiracy and altering of document.

Zuleika was equally charged with two counts of conspiracy and contravention of the Procurement Act while Denkyira faced only a charge of conspiracy.

Yasmine, Zuleika's cousin who was not in court because prosecution said they found it difficult contacting her, was also charged with conspiracy to commit crime.

Although counsel for the accused persons, namely Nene Amegatcher, representing the former minister and his wife, Yoni Kulendi, Egbert Faibile and G.K.A Babanawo, representing the other accused persons, pleaded for a self recognisance bail, and a plea for their passports not to be seized as suggested by the Chief State Attorney Anthony Gyanbiby, the court presided over by Justice Charles Quist, only granted that accused persons be bailed in the sum of GH¢10,000 each with two sureties.

Briefing the court on the matter, Anthony Gyanbiby told the court that somewhere in May 2008, Asabee was appointed Minister of Information and that on assumption of office, he brought along Kofi Asamoah Boateng, a retired civil servant who was on contract at the Ministry of Tourism, and made him the Director of Finance and Administration at the ministry over Mr. Denkyira who became his deputy.

According to him, Asabee, not long after, held a management meeting during which he discussed with the senior officials of the ministry the need to suspend all investment activities already budgeted for the year 2008 in order to re-direct those funds for renovation works on the ministerial block.

The Chief Attorney indicated that the renovation which included tiling of the office, instead of the use of carpet, was Asabee's decision to leave a legacy at the ministry.

Mr. Gyanbiby disclosed that for the commencement of the project, Asabee brought Zuleika, his wife, who at that time owned a boutique called Lady Zee Intimate and Body Shop managed by her cousin Yasmine Domua, and therefore did not know anything about the work or qualify as the contractor, to take charge of the renovation works.

He further stated that for the purpose of executing the work, Zuleika allegedly contacted her senior sister, Irene Zakpa, a possible prosecution witness, to lend her (Zuleika) the registered document of her company called Plexiform Ventures which dealt in general trading and manufacturing, interior decoration, landscaping, import and export, media and event organisation.

Zuleika, he alleged, emailed a letter, invoices and receipts to Yasmine to sign and then instructed her to send them to her husband for processing.

According to the prosecutor, after receiving the said items, Asabee handed over the document through his secretary to Kofi Asamoah Boateng but the latter observed that the document was not complete and so informed Asabee.

After two months, Asabee allegedly produced a document with the name Plexiform Ventures to Kofi Asamoah Boateng who in turn sent it through Sampong to Denkyira to arrange a meeting and award the contract.

However, this took sometime and Asabee, the prosecutor alleged, was not happy with the delay because he felt he would end up losing investment since it was getting to the end of the year.

Consequently, he told the court that Asamoah allegedly forged a document purporting to be minutes of the Entity Tender Committee of the Ministry of Information which contained a purported contract awarded with an amount of GH¢86,915.85 to Messrs Plexiform Ventures.

Meanwhile, Gyanbiby stated the renovation was already going on in earnest without any contract awarded and was supervised by Yasmine, as the contractor allegedly fronting for Zuleika who did not know what the work entailed.

After the completion of the work, when there had not been any contract awarded as required under the Procurement Act, Sampong and Frank Agyekum allegedly wrote letters to the Ministry of Finance requesting for payment of work done by the company when they knew no due process had been undertaken to execute the job.

The money was eventually released and lodged in the ministry's account through the Controller and Accountant General after which they were referred to the Head of Account at the ministry, who after realising that the relevant documents were not attached, insisted that until the documents were provided, he would not pay the money.

As a result of this development, Zuleika, Dominic Sampong and Denkyira allegedly summoned the accountant to Denkyira's office and they all prevailed upon him to effect payment but he declined.

Incidentally, according to him, just around that time, a directive was issued by the Presidency that all Ministries, Departments and Agencies should not pay for any investment activity.

As a result of the head of account's insistence on the relevant documents, Asamoah allegedly forged invoices and receipts of a non-existent company.

The prosecutor said no consultant was engaged in respect of the job but the company obtained a false tender document, architect and engineering certificate and evaluation report from a supposed consultant.

Investigations showed that Prosper Arku instructed one Agbesi, an employee of the agency, to prepare the document.

According to the prosecutor on May 29, 2009 Dominic wrote a letter to the Ministry of Finance with a special request for payment for the renovation works, knowing very well that the whole transaction was irregular and fraudulent.

He noted that if not for the vigilance of the head of the accounts, the money would have been paid easily. This state of affairs, he added, was brought before the BNI who conducted investigations and brought the accused to court.

According to the prosecutor, he was ready to start the case with his six prosecution witnesses.