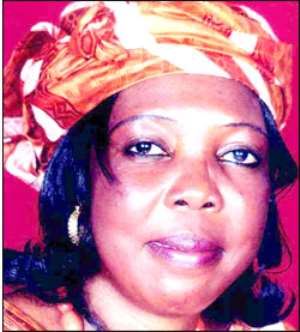 
The New Patriotic Party's (NPP) Member of Parliament for Chereponi in the Northern Region Doris Seidu is dead.

Mrs Seidu was pronounced dead last night at the Korle-Bu Teaching Hospital after a long illness.

Sources close to the family tell Joy News she died of a heart related illness, which she had been battling for some time and had been absent from parliamentary sittings for some months.

Close family relatives say they are in shock at her sudden death. They tell Joy News the 40-year-old MP was recuperating a few weeks after she had been discharged from the Cardiothoracic Unit of the Korle-Bu Teaching Hospital.

It's not clear what she had been suffering from, but family members say she had lost considerable weight as a result of the illness.

Mrs Seidu came to Parliament on the ticket of the opposition NPP in 2005 and served on the Education and Mines and Energy committees.

She retained the seat last year when she polled 9,188 out of the 17,559 valid votes cast, representing 53 percent of the votes.

Her death effectively means that a bye-election will be held to find a replacement for the deceased MP.

Chereponi is seen as a swing constituency, and according to political pundits, this does not bode well for the NPP, which won the constituency by a very slim margin.

The constituency is made up of two tribes, the Chokosis and Kokombas and political analysts argue that the party would need to get a candidate, who like the former MP, laid claim to both tribes.

Mrs Seidu is teacher and social worker by profession. She is survived by a husband and one child.