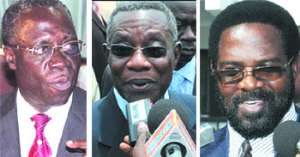 The memory of Alhaji Yusuf's hotel near the airport, which was pulled down at the instance of ex-President Rawlings still lingers in the minds of Ghanaians, because of allegations that the facility was built on a waterway.

In more recent times, the architectural edifice that is nearing completion right opposite the African Regent Hotel- The Villagio, has been cited in angry outbursts by the National Disaster Management Organization (NADMO), headed by Kofi Potorphy, as an illegal structure standing on a waterway, that needs to be pulled down.

On an evening to celebrate one of the famous sons of Abuakwa, Ferdinand Ayim, Mr. Yaw Osafo-Maafo, the former Finance Minister went to town on the subject of indiscipline and the need for meritocracy in society, and went as far as calling on Ghanaians to support the Mayor of Accra in his fight to check the menace of flooding.

According to Osafo Maafo, almost all successive governments have identified the flood problem in Accra but little has been done to rectify the situation. He could not fathom why there are bye-laws and regulations governing the country, and yet the implementing agencies sit in laxity for Accra to always get flooded whenever it rains, with resultant death of innocent people.

“That problem has always been mentioned, so what we need to do is to remove structures built on waterways so that when it rains we will not suffer”, he said, asking “the last time it rained, wasn't it pathetic, how many people died?” He attributed this unfortunate situation to the incompetent way of handling the city's bye-laws and regulations.

For this reason, he urged all political parties to throw their weight behind the NDC administration and the Mayor of Accra, Dr Alfred Vanderpuye, in restoring sanity.

“Lets have this competently handled, that any structure that is authorized or unauthorized, if it is on a waterway, it must go”.

As a country with one of the best Engineering Universities on the entire continent of Africa, Mr. Osaf-Maafo wondered why Ghanaians as a people can not solve some of these simple engineering problems. According to him, he always felt embarrassed whenever people die as a result of flooding that could be controlled if the proper things were done.

Osafo-Maafo based his conviction on the fact that the success of America and other countries in creating huge opportunities for their people can be explained by the strength of institutions that have been built around competence and state loyalty.

The former Finance Minister thus declared his personal support for the action of AMA, saying “we should give all the support to the Mayor, and tell the Mayor he has my support, he should remove all unauthorized and authorized structures in waterways and let's get the city put together.”

According to him, Ghana is an incredible place for what he described as 'abundant future and hope' and thus stressed the urgent need to create better avenues and conditions for the realisation of such goals. “It is important to stress that our individual and collective energies and resources should be channelled to achieving accelerated development.”

In this light, he said the country's development challenge should be focused on how to promote broad-based development within a stable and peaceful environment with the ultimate aim of increasing the standard of living of its citizens.

Mr. Osafo-Maafo therefore stressed the need for Ghanaians to emphasise on competence in their decisions and actions, since according to him, it is fundamental and paramount for the nation's development. As the most important resource of the country, he noted that “Ghana should not be denied the services of its competent human resources.”

The programme which was chaired by Businessman and party stalwart, Mr. Kwame Pianim, was under the theme -'Ghana's developmental challenges: perspective on the roles of competence, loyalty and sycophancy'.

It was attended by key party functionaries including, Nana Addo Dankwa Akufo-Addo, its Presidential Candidate in the 2008 election, and former Ministers and some Members of Parliament