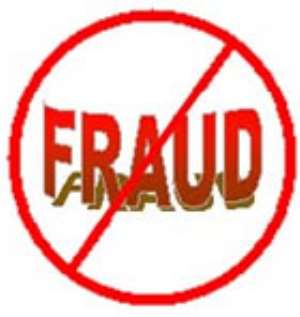 
23-year-old student of the Central University College in Accra has been arrested by the Police for allegedly defrauding a 71-year-old American, Lloyd Mutinsky, of thousands of dollars.

Richard Tetteh, according to the Police, introduced himself as Doris Laryea to Mr Mutinsky through contact on the internet and succeeded in duping him to the tune of 320,000 dollars.

The two have been in a relationship since 2006.
Luck, however, ran out for Tetteh last week when he appeared at a post office to collect an amount of 41,000 dollars and a parcel of brassieres and other ladies underwear sent to him by Mr Mutinsky, Detective Superintendent Denis Abade, head of the Vetting and Criminal Analysis (VCA) unit of the CID old the Times on Monday.

Mr Abade said through correspondence on the internet, Tetteh lured Mr Mutinsky into believing that he was dealing with a single woman - a fellow American citizen schooling in Ghana who was interested to marry a male partner from the US.

He had told Mr Mutinsky he also dealt in gold and other precious minerals.

Mr Abade said to convince Mutinsky that he was dealing with a woman, Tetteh posted a number of pictures of a lady to him as a result of which he sent to Tetteh, an unspecified amount of money to procure an air ticket to visit him in the US.

Superintendent Abade said at a point, the two agreed to get married in the USA for which Mutinsky sent more money to Tetteh for other travelling expenses. However, after sometime, Tetteh informed Mutinsky that he would not be able to travel to the US because he was arrested at the Kotoka International Airport for carrying gold ornaments.

Much later, Tetteh made yet another request for money from Mr Mutinsky to enable "her" to travel to the US for a visit.

However, on the scheduled date when Mutinsky was to pick the supposed lady at airport, he again, had information that "she" was deported at the Heathrow Airport.

Mr Mutinsky at this point became suspicious and subsequently informed the US Embassy in Accra from where the CID was alerted.

The American was made to send some items, including a DVD deck and assorted ladies wear to Tetteh and he was arrested when he went to collect the items.