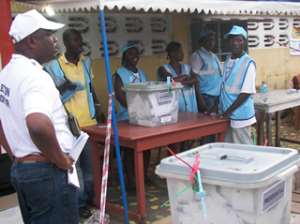 As the African continent faces the realities of true democracy which components are so numerous, the West African nation of Ghana has shown some level of maturity in her democratic dispensation since the Fourth Republic ushered in multi-party democracy from her dark days of the military era under the military strongman Flight Lieutenant Jerry John Rawlings, who helped to transform Ghana from the days Ghanaians used to queue in the street to buy scarce local Ghanaian dishes - breads, toilet tissues, milk, sugar etc - to what is today known as one of Africa's safest and economic vibrant nations.

The nation, despite her surrounding neighbors being engulfed with crises of all kinds including insurrection, tribal wars and etc, refused to play to the galleries of these odds that have destroyed lives and properties giving rise to their West African brothers and sisters seeking refuge in all major towns and villages in Ghana due to her stability in the sub-region.

The nation indeed has not only been stable but she now play host to major international conferences that was once held in next door Ivory Coast due to her stability, economic prowess and infrastructure development.

The nation is also known as the safest destination for tourists, business executives, international movies and sport stars from around the globe and can boast of 2 to 5 stars international hotels and even international hostels. Ghana indeed has come a long way, in her struggle for the liberation of Africa from her colonial masters by her torchbearer including the legendary Kwame Nkrumah and the rest of giants of the Gold Coast, has never lost that sense of belonging since her independent from the British to the extent that every young or old Ghanaian always no matter their locations remember home and will do everything humanly possible to invest in their mother land Ghana and indeed construct the best building he could ever dream of in his village or in Accra the capital.

Ghana to a largest extent has shown higher level of maturity in the practice of democracy on the continent since she ushered in her Fourth Republic that has chalked two electoral successes credited as being free and fair by the international community and the United Nations Under-Secretary General for Political Affairs Mr. Lyn Pascoe, recently lauded Ghana's democratic development when he paid a courtesy call on the President of Ghana Prof. John Evans Atta Mills, at his office in the Osu Castle, the seat of government in Accra.

The Danish Ambassador to Ghana, Mr. Stig Barlyng, has commended Ghanaians in general and politicians in particular for exhibiting rare constitutional stamina in the light of the closest result in the 2008 general election.

He recalled that "during the exciting and nail-biting days between the first voting and the last result, Ghanaians rose to the challenge of maintaining trust in democracy", adding that "Ghana has shown the way, not only to sister nations in the sub-region, but to the rest of the world".

One can attest to the fact that Ghanaians, as a people, though have their ugly side but they try to put Ghana at heart and the country has been placed in the center of all that actually take place in the nation. A clear manifestation of this was the recent election that ushered in the National Democracy Congress (NDC) led by Professor John Atta Mills that cost the country fortunes in terms of finances that took the democratic process into a run-off after the contestants could not meet the required 50 and plus one percent .

As a journalist who did cover the election, one could feel the tension in the air like other elections within the continent that saw most of their run-offs often characterized by blood bath, with security forces lynching opposition supporters. Yet Ghana in two successive terms gave power to critical opposition party including the New Patriotic Party (NPP) under former President John A. Kufuor after almost 30 plus years in opposition from the founding fathers days of the then Gold Coast, and now back to the National Democratic Congress (NDC) who ruled Ghana for almost 20 years under Flight Lieutenant Jerry John Rawlings whose brain child is the present ruling party.

Former President John A. Kufuor of the then ruling NPP publicly told Ghanaians and the international community that despite the tension, the Electoral Commission under the Chairmanship of Dr. Afari Gyan is a separate entity and their decision on the outcome of the election will and must be accepted. According to the Ghanaian constitution the 7th of January proceeding election, there must be a winner and as such he was prepared to handover the mantle of state authority to the winner announced by the electoral commissioner as he didn't want to be recorded in history as the president that destroyed Ghanaian hard won democracy.

Lest we forget, there were problems of course being human, but one thing the people of Ghana taught the world was that from the uneducated to highly educated saw Ghana as the only nation they have as they defused the mounting tension that characterized the run-off and accepted the final result announced by the Chairman of Ghana's Electoral Commission Dr. Afari Gyan.

The present President of the Republic of Ghana Professor John Evans Atta Mills is distinguished gentleman in today's contemporary African politic, this law professor is so far one of the Africa's statesman who has led by example. During the regime of the Rawlings era when he served as Vice President he refused to take allowance and instructed that his salary be used for children home.

More astonishingly, he recently told his country men and women that he is not interested in taking per diem on his oversea trips as long as he remained the President. The per diem, he said should be used for the less fortunate in society.

Moreover, the Ghanaian President went beyond his border to seek the interest of his fellow citizens that were brutally murdered in cold blood by unknown persons in the Gambia and persuaded his counterpart President Yahya Jammeh of the Gambia to pay compensation to the families of the murdered Ghanaians in that country. The victims were transiting there en route to Europe in 2005.

Steps like these are very rear in the African politic and this has convinced critics that Ghana is prepared to spearhead any dispute within the sub-region. Ghana has something worth emulating when political manipulations, tribal sentiment, partisanship has take center space in the Continent.