Obama's words: Worth more than a million pictures 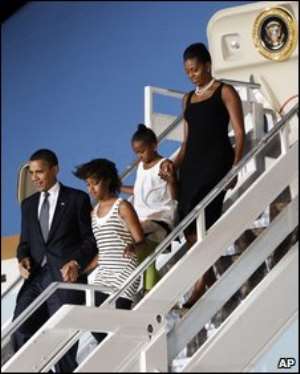 From the way our ministers of state and MPs were fallen over each other just to shake hands with Barack Obama, I suppose most of them are not going to bath for a few days – just to make sure that his 'touch' stays with them for a long time. Did you see the ministers at the airport? They broke protocol and created a chaotic scene as they whipped out their camera phones to take pictures of (and with) him.

Scenes from the “expanded breakfast” were no different. Even Jerry Rawlings turned himself into a hungry paparazzi, snapping away on his camera – taking precious pictures for the family album.

Seeing our so-called big men and women kicking, pushing and shoving to take pictures of the most powerful man on earth filled me with a great deal of shame. Breaking protocol was unpardonable but it's understandable.

Obama is a superstar. He's the world's only superstar president. He draws big crowds wherever he goes. He's the most powerful man on earth and shaking hands with him is a privilege. A photograph with him should be a priceless memento – even for heads of state. So those government officials and MPs who were struggling and tripping over each other to get a photo-op with him were only being human, searching for memories they could bequeath to their children and grandchildren.

If only they knew he was carrying a masterful speech in his briefcase, they wouldn't have behaved like little kids just to take a few pictures. If they listened carefully to the American leader's speech, our ministers and MPs should realise that they were caught up in a rare moment when a few words are worth more than a million pictures. The pictures they embarrassed themselves to take with him will only adorn their albums but the words he spoke can transform this wretched continent and make a difference in the lives of millions.

It was a brilliantly-crafted, well-delivered speech full of common-sense. In sections of the western media, they called it “the good governance speech” but the message wasn't exactly new. Obama, the great orator and inspirer that he is, merely breathed new life into Kwame Nkrumah's message at the birth of the nation called Ghana – that the black man (the African) is capable of managing his own affairs. Last Satuday, Obama said it differently: “Africa's future is up to Africans.”

For decades, leaders on this continent have done very little than to prove Nkrumah wrong. Nkrumah himself did very little to give true meaning to his own words. If Nkrumah had planted the seeds of democracy and built the “strong institutions” Obama spoke about, Africa's story (or, Ghana's, at least) wouldn't have been as pathetic as it is today.

What Barack Obama did on Saturday was to try to help Africa turn a new page, where Africans realise that we are a wretched lot and we have a lot of catching up to do. He didn't say so in as many words but that was the point: that we are being left behind and if we don't start taking responsibility, ignorance and disease will kill us where we don't hack ourselves with machetes and blow heads off with bazookas.

But will our leaders heed Obama's advice?
I don't think so.
Robert Mugabe is not going to change his 'lunatic' ways anytime soon. Al-bashir in Sudan will not listen to Obama and stop persecuting his own people in Darfur. Nigeria's corrupt politicians who stash billions of dollars under their beds (and in Swiss accounts) will not stop plundering the state because of Obama's beautiful words. Here in Ghana, I don't think our politicians will forego their ex-gratia because Obama implored them to stop enriching themselves and start investing in the health and education of the people.

It's hard not throw your hands up in the air in despair.

“Opportunity won't come from any other place — it must come from the decisions that you make, the things that you do, and the hope that you hold in your hearts,” he says. “I am particularly speaking to the young people. You have the power to hold your leaders accountable and to build institutions that serve the people.”

Even though he devoted so little time to urging the youth to demand accountability from our leaders, I think that portion was the biggest gem in Obama's speech. Our leaders will not act if we don't push them and demand that they do what we elect them to do – make life worth living for us all, not just for themselves and their privileged friends and families.

We, especially the young people, should stop accepting (and defending) their excuses. We need to reject mediocrity – like the awful audio and video feeds that were beamed around the world and the utter disorganization at the airport on Obama's arrival. We must demand nothing but the best – for that's what we deserve. Tokens are not enough.

We have to make it clear to our leaders that they cannot compare us to the poorest countries when we demand what we are due (like water for all) only to turn around to compare us with the richest countries when we demand that they stop wasting our scarce resources on extravagant luxury (like building a presidential mansion and acquiring presidential jets).

We must force our leaders to start thinking of creative, common-sense solutions to our problems. Where we have to call them names they don't like, we should. Where we have to insult them, we will. Where we need to laugh at their senselessness and taunt them, we will. And where we need to praise them, we must. Where they need to be booted out, we shouldn't spare them. Where they need help, we must not hesitate to reach our hands out. That's democracy. And that's why Obama came here.

The so-called spotlight Obama's visit brought onto this nation will fade. The little money he promises to give will help in some small ways and eventually get finished, probably before his term ends. He, however, gave us a gift that should stay with us for decades: his words. Let's hope that our leaders relish those words as much as they do the pictures they fell over each other to take and the handshakes they got.