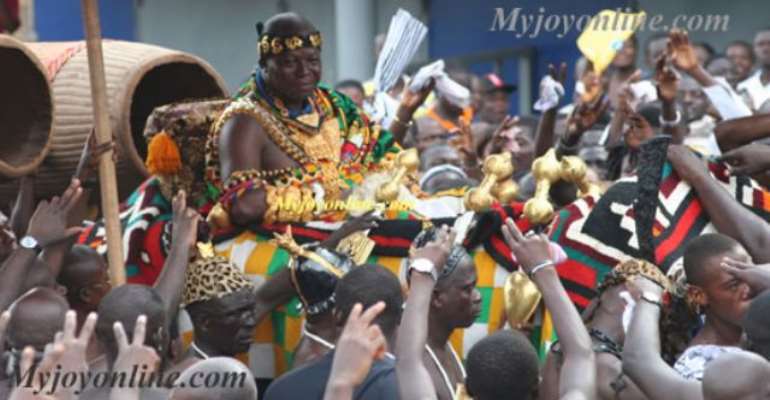 Not too long ago, I wrote an article titled, “Is Asantehene a Super Chief?” In the said article I condemned certain ethnocentric comments made by the Ashanti Regional Minister, Mr. Kofi Opoku Manu, when he appeared at the Vetting Committee of Parliament. I did not for once make any derogatory comment about the Asantehene Otumfuo Osei Tutu II.

The piece bothered on ethnicity and a lot of readers commented. Some read with their heads but others read with their hearts and had my inbox inundated with insulting remarks. Their reason? The Asantehene is sacrosanct and no negative comments should be made about the Golden Stool even if one is provoked. I received tones of praise from anti-Asante readers who claimed the piece was the best piece they had ever read on the internet. Others disagreed with my line of argument and wrote to me. For over a month, I was exchanging mails with some reasonable readers and I learnt a lot from mature thinkers. Honour must always be given to whom honour is due but if someone errs, he or she must be made to understand it no matter how revered he or she is.

I harbour no malice against anybody and I will repeat for the umpteenth time that Otumfuo-Osei Tutu II is a great man by all standards and one cannot downplay this fact even if one has a problem with Asanteman. Our elders say even if you hate a duiker, you must not fail to acknowledge its swiftness. In his bestselling novel Things Fall Apart, Chinua Achebe writes that “he who pays homage to the great paves way for his own greatness.” I would like to associate myself with Achebe because great men are rare and to become great, one must identify truly great men and learn their ways.

On Sunday 26th April 26, 2009, as I watched the climax of Otumfuo's 10th Anniversary on television, a sense of pride and elation electrified my being and for once in a rare while, the pride of being African and for that matter, a Ghanaian filled my heart. Otumfuo Osei Tutu has brought honour not only to Asanteman but also to all Ghanaians and the entire institution of Chieftaincy in Africa. His peerless achievement since his occupation of the highly coveted throne has not only endeared him to Asantes but also all clear headed Ghanaians and beyond.

Many have argued that Otumfuo Osei-Tutu II inherited a stool which carries with it honour, and his position is therefore an ascribed and not acquired. It is true that he who inherits the Golden Stool inherits honour but our elders have a saying that a man must do his own growing up no matter how old his grandfather was. Otumfuo's achievements are there for all to see and I will not mention any of them for the sake of monotony. His ability to attract high-profiled dignitaries across the globe does not stem from the fact that he presides over the biggest kingdom in the country. Otumfuo's ability to make headlines in international media such as the BBC does not come from the mere fact that he is the 16th occupant of Sikadwa Kofi.

This is happening in a period in the nation's history when the nefarious activities of some traditional rulers have reduced chieftaincy into disdainful institution. Some chiefs have become architects of conflicts, originators of litigation and synonyms for corruption. As a result, if one buys a piece of land from a chief, then one must be preparing to battle it out in court with two or more others who have also “legally” acquired the same piece of land.

Otumfuo's honour during this anniversary has a lot of lessons for traditional chiefs in this country, especially the chiefs of northern Ghana, most of whom have sold their dignity to politicians and fueled conflicts in the poverty-ridden part of the country. Gone were the days when the power of a king lay in the number of battles won during his reign. Today chiefs are agents of development and conflicts will only repel investors and posterity will judge such rulers.

Other kingdoms may not be endowed with resources like Asanteman but J.F. Clarke teaches us that if we cannot do great things, they can do small things in a great way. Asanteman has had its share of chieftaincy problems but we hardly hear about them. Chiefs in northern Ghana must know that our greatest enemy is poverty, which can only be overcome through hard work in unity.

Those who argue that the position of Asantehene should be democratized should have their heads examined.

To Otumfuo, I say Afenhyiapa! Your reign has brought pride to Mother Ghana. You have taught us the younger generation that one does not only have to be the president of the nation to be able to exploit. Great things you have done but greater are the things you can still do. May your reign be long and may the Almighty God grant you wisdom to continue to prove why you are called King Solomon.

To me, your greatest legacy is the peace, discipline and sanctity you have brought to the institution in your ten years of excellent leadership.

Someone should however help me answer this question. Is the title of Asantehene “Otumfuo” or “His Majesty”? I want to know because I supported Otumfuo when he banned the use of academic titles by chiefs within his domain.