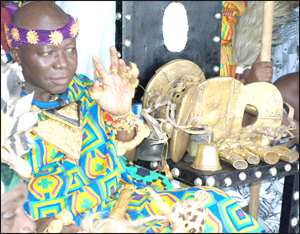 With a population approximately in excess of ten million, the Ashantis form a significant chunk of Ghana's population and as the people of this great ethnic group observe the Akwasedae festivity and the 10th anniversary of the enstoolment of King Osei Tutu II, their culture and history have come under the spotlight.

Europeans, who came into contact with the Ashantis, could not subdue their excitement at the display of colours and wealth in the form of solid unadulterated gold during festivals and other social functions by this proud ethnic grouping.

Until their final subjugation by the British, the Ashantis lived under clearly defined system of governance alongside a respected constitution.

The King of the  Ashantis commanded copious respect and power as he ruled a number of vassal states conquered during a number of wars.

The kingdom extended over a vast area and in some cases weaker states sought to come under the protection of the great Ashanti King.

The collection of historical materials of the Ashantis is unsurpassed by any ethnic group in the country and can compete with others from the rest of the African continent.

No wonder when great African tribes with respected pre-colonial history are being considered, the Ashantis are the first or among the first.

Their rich history and strength can be attributed to the efforts of Osei Tutu, perhaps the most known by scholars of the history of the Ashantis.

It was this great personality who in the 1670s organised a number of states into what became the Ashanti Kingdom whose borders extended to areas even beyond present-day Ashanti Region.

Supporting him to achieve his objective of establishing a great empire was the fetish priest from Akwapim, Okomfo Anokye, the man credited for the coming down from the skies of the Golden Stool.

Scholars of the Ashanti Kingdom and anthropologist consider the Golden Stool as an impetus for the establishment of Ashanti.

It embodies the soul of the ethnic group and all Ashantis see it as such.

No wonder the Ashanti were ready to spill their blood to protect the Golden Stool. The interaction between the Ashantis and the Europeans is a chapter replete with interesting developments bordering on war, peace and trade.

With the Europeans on the coast seeking to create trading posts in the hinterland and the Ashantis not ready to be subdued in any way, there were a number of wars which historians in England tagged the Little Wars of Ashanti.

The most significant engagements were those fought between 1823 and 1896, the Anglo-Ashanti Wars.

The wars were varied but perhaps it was the final one waged in 1900 which caught the attention of many historians. It was this war which preceded the incorporation of the Ashanti Kingdom into the Gold Coast colony.

It is worthwhile considering the story of Nana Prempeh I, the man who went into exile in Seychelles Island as a way of preventing a war and thereby risk losing the sacred Stool.

Today as we compose this piece, some of the descendants of the King live in the Island as citizens of Seychelles.

Sir Frederick Hodgson, when he demanded to sit on the sacred Golden Stool, was met with stiff resistance by the Ashantis who even went to war to deny him the opportunity which they found sacrilegious.

The Ashantis lost the ensuing war but succeeded in preventing what they considered the sacrilegious act of allowing the White man to sit on their soul.

After failing to subdue the Ashantis, the British ordered General Garnet Wolseley, a tough and respected soldier, from his base in Sierra Leone to come and deal the Ashantis a final blow.

In the final onslaught which came to be known as the Sagrenti War or Sir Garnet War, the British, supported by troops brought down from the Lagos Colony (Captain Glovers 600 Hausas), routed the Ashantis and forcefully brought them under the British colonial authority as a protectorate.

The feat of General Garnet Wolseley earned him a knighthood from the British Crown.

The role of the brave Yaa Asantewaa whose famous words: “if the men of Ashanti would not fight the strangers, we the women will” cannot be over-emphasised in the history of the Ashanti wars with the British.

Although the British finally defeated the Ashantis, this was only accomplished through superior weaponry. The British admired the courage of the vanquished who kept replacing the dead during the battle as they made good the popular saying that “when you kill a thousand, a thousand would turn up as replacement.”

Historians have noted that the Ashantis were one of the few ethnic groupings able to offer stiff resistance to the Europeans in the pre-colonial period.

The relationship between the Ashantis and Europeans was not underpinned by wars only, as trading activities through barter in the initial stages went on for a long time.

It has been stated that the Ashantis have the greatest amount of historiography in sub-Saharan Africa.

Another historian who compiled a great deal of Ashanti history was the 19th historian, Thomas E. Bowdich, whose store of pictures depict the colours of this great ethnic group as captured by their durbars and other festivities.

Relations between the Ashantis and the British improved and in 1926, the Asantehene was offered ceremonial control over Kumasi and in 1935, the full role of leader of the ethnic group was restored after a long suspension.

Otumfuo Osei Tutu, the incumbent Asantehene, is without doubt a worthy descendant of these great historical characters whose names have been inscribed in gold in the annals of the country and the Ashanti Kingdom.

To his credit is the Otumfuo Educational Trust Fund which is benefiting many brilliant but needy students.

His contribution towards peace not only in his great kingdom but in the troubled Dagbon traditional area is beyond quantification.

His brief but momentous period on the throne has seen the fortunes of the Ashanti Kingdom wax from strength to strength.

His Otumfuo Osei Tutu II's Charity Foundation was established to stop the decline in the standard of education, by supplementing the efforts of central government among others.

The foundation is seeking to achieve this vision through the Otumfuo Education Fund, The Serwah Ampen AIDS Foundation for Children and donations to charitable organizations.

One of the important dates on the calendar of the Ashanti Kingdom whose consistency has not shaken is the Akwasidae festival, a 40-day period of celebration.

During the period, the King receives homage from his subjects amidst colour and pageantry.

This year's occasion has attracted a lot of attention, as it is the 10th anniversary of the ascension to the throne by the Otumfuo Osei Tutu II.

The occasion attracted thousands of tourists to the Garden City who beheld the 200 subservient chiefs paying traditional compliments to their guardian King.

The festival, a 40-day cycle, offers an opportunity for the people of Asanteman to remember their heroes and heroines and they are many.