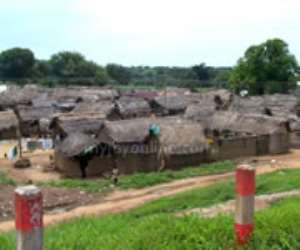 Northern Ghana administratively comprises the three regions of Ghana which lie in the Savanna belt of West Africa and include; Upper West, Upper East and Northern Regions. Geographically, it is boarded to the north by Burkina Faso, to the South by Brong – Ahafo and Northern Volta, to the East is Togo and to the West is Ivory Coast.

Northern Ghana's fair share of natural resources include shea nut trees, “dawadawa”, Iron ore, salt, abundant land among others. It is blessed with honest, intelligent, hardworking and determined people who however have limited opportunities as compared to their counterparts in the South. Northern Ghana is poor by every indicator of human development. The problems confronting the people of the north are multi-faceted as elucidated below.

First and foremost is the conflict situation in the North. Numerous chieftaincy and land disputes some of which have historical antecedents hamper development in the area. More often than not the youth are used to perpetuate violence in areas such as Bawku, Gushiegu, Yendi and others which often lead to destruction of lives and property running into several billions of cedis. In the words of Martin Luther King Jnr. in his “Letter from Birmingham Jail”, injustice anywhere is a threat to justice everywhere. People of the north should not sit in Accra and Kumasi and allow their fellow brothers and sisters to die like fowls not through any false of theirs but the greediness of some unscrupulous people including some politicians. These conflicts have led to increase in poverty levels in the area and since a hungry man is an angry man; the conflicts seem to have no end. We can not sit in the cities and allow our future leaders in the north to wallow in poverty and in despair. What affect the people of the north affect the people of the south as well. For this reason, we should all be part of “the solution and not the problem”.

Colonialism is partly responsible for the underdevelopment of the north. The colonial masters (British) deliberately denied the people of the north access to formal education. They instead saw the north to be a reservoir for labour supply to the cocoa farms and mines in the south. Education got to the north hundred years after it had gotten to our brothers and sisters in the south. Education therefore came as a “beacon of hope” to the people of the north. Thanks to the missionaries especially the Catholic Church which opened up the place and built many quality schools including St. Francis Xavier Minor Seminary, Wa, Notre Dame Seminary, Navrongo, St. Charles Seminary, Tamale, St. Francis Girls in Jirapa among other good schools which have produced great sons and daughters for Mother Ghana in particular and the World at large. Nevertheless, much still need to be done to improve upon the level of education in the area since it is only education that can help bridge the north-South dichotomy.

Furthermore, the media do not help in the projection of the north for development. It is not uncommon to hear in the news about how journalists of “international repute” misrepresent the north. It saddens my heart when I hear in the news that, “Bolgatanga in the Upper West Region” or “Wa in the Upper East Region”. This is very unfortunate. It is important that as Ghanaians we understand the culture of others and know the regions of the country as well. This will help all of us appreciate the diversity in culture in the various regions of the country. The media tend to hype the negative aspects of the north and the least provocation over there is often liken to Gulf War 1 or the War in Iraq. This is no exaggeration of the fact.

There is huge potential in the north when harnessed will create employment opportunities for the people and bring development. Tourists sites of high interest abound in the area include, Mole game reserve, Larabanga Mosque, the mystery stone all in the Northern Region. The Paga crocodile Pond, the slave camp in Nania, the Tongu hills and shrine in the Upper East Region. The rock pedestals/Mushroom rocks in Wuling near Jirapa, the hippo. sanctuary on the Black Volta near Wichau, the Nandom Catholic church (Minor Basilica) which is the largest stone church building in Africa all in the Upper West Region are just a few of the many tourist sites in the North when well developed and managed will bring development to the people.

In addition, lack of motivation, encouragement often compel most of the youth to migrate to the South especially Accra and Kumasi to look for jobs which are non-existent. They end up as potters (Kayayei) which expose them to rape and the vagaries of the weather since most, if not all, do not have descent accommodation. Well-to-do people from the north who work in the south and the diaspora do not want to go back there for fear of being killed by witchcraft. This has led to retardation of development in the area for several decades.

Agricultural development as said elsewhere should be pursued vigorously in the North. Northern Ghana has vast stretch of land and I propose that irrigation dams should be constructed to encourage dry season farming. Poultry farming is another venture that should be encouraged and supported. Farmers should be given credit facilities, farm implements. Through this, employment opportunities will be created to solve the many problems confronting the people of the North.

Conclusion could be drawn by saying that we the sons and daughters from the North should know that the development of the north is in our own hands. No one government can solve all the problems of the north. The problems of the north can be solved by northerners themselves through commitment, dedication, hard work and peaceful co-existence. Poverty is a human problem and not a natural disaster. Since it is a human problem, it can be solved by human beings. The time has come for all of us to stop the blame game theory as I call it and Marshall our strength with zeal and enthusiasm in unity and progress to help develop the north. Let us live in peace and harmony as one people with a common destiny.

More Feature Article
ModernGhana Links
A Quick Note To B-BOVID's Workers And Smallholder Outgrower Farmer-Stakeholders
Married Women Compete With Single Women For Bachelors
For what shall I compare the so-called eminent citizens of Kumawu?
Media General's claim of "egregious intolerance" unfounded
The Great Betrayal Of Ghanaians By The Political Elite – The 2022 Budget
Joe Wise Did Not Commit Any Illegality In Approving The 2022 Budget Statement
Youngkin Defeated McAuliffe by Promoting Ku Klux Klan Theory
Where there are Tailings, No Grass Grows: Serbians Protest against Rio Tinto
A Trumpian Autocracy Will Squarely Depend on Civic Tolerance
TOP STORIES