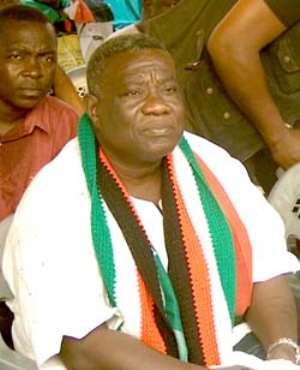 John Atta-Mills' failure to attend a highly significant peace meeting organized in Accra by the Editors Forum for presidential candidates in the face of some political violence and the allegations making the rounds by his own party that the ruling NPP intends to rig the December 7 general elections further fuel the political speculation whether he has the guts to rule Ghana.

Atta-Mills has been missing out on vital state political functions, his campaigns not Ghana-wide, his inability to articulate the National Democratic Congress' (NDC) policies in tackling Ghana's development tribulations, and unlike the ruling New Patriotic Party (NPP)'s presidential candidate, Nana Akufo-Addo, Atta-Mills has not been able to project confidence needed as a political leader in pushing the frontiers of Ghana's progress.

The row that ensured when the NDC manifesto was unveiled a few weeks ago, in which the NPP accused the NDC of doubling-up its ideas and its programmes, reveals an Atta-Mills who lacks original ideas, fuller grasp of Ghana as a development project, and, therefore, short of insight as to how he will tackle Ghana's problems.

Though Atta-Mills may be qualified academically, I have always wondered whether he has what it takes to be President of the Republic of Ghana in an election season that has been fought on surprisingly low cultural and intellectual level, with presidential candidates, except NPP's Akufo-Addo, not demonstrating detail grasp of how to engage Ghana's development challenges. Yes, Atta-Mills lacks the dexterity needed to ride the rough-and-tumble of the sizzling Ghanaian political terrain. Not only does he appear politically dull, with unpresidential body language, he seems not to care much about the political process as is expected of a leader of a main opposition party.

More seriously, Ghanaians are becoming increasingly concerned about Atta-Mills' health as a President of Ghana (in case he wins the December 7 general elections) and his virtual control by ex-president Jerry Rawlings and his wife, Nana Konadu Agyemang.

Under the brutal grip of the Rawlingses, Atta-Mills is under some sort a shadow of the powerful Rawlingses that appear he hasn't been able to extricate himself from over the years and who virtually control his thinking and direct what he should do on vital political errands. When the US President George Bush visited Ghana in February, 2008, for some unexplained political reasons, Atta-Mills said he won't attend the ceremony. Then with pressure from the Rawlingses, he turned up with the Rawlingses for the Bush ceremony, gleefully greeting Bush, his wife and other dignitaries.

Political Ghana's concerns about Atta-Mills capacity to govern also go beyond the Bush visit. Other Atta-Mills' actions that worry Ghanaians, in the count-down to the December 7 elections, point to a presidential candidate who doesn't have what it takes to be president of a development challenged Ghana. Few months ago, Atta-Mills failed to turn up in a Kumasi forum organized by the Trade Union Congress for presidential candidates to talk about their labour policies in a Ghana where unemployment is a vexing issue. And yet among others, Atta-Mills failed to grace a seminar organised by the Kwame Nkrumah University of Science and Technology Centre for Renewable Energy for presidential candidates to discuss how they will solve Ghana's energy problems.

Is Atta-Mills physically fit to rule Ghana? If elected President on December 7 can Atta-Mills finish his presidential terms? Has he got serious health issues that may complicate his presidency? Is Atta-Mills hiding any health issue from Ghanaians as matter of national importance? Is he under some sort of juju-marabout spiritual spell by his controllers that is wearing him away?

Over the years such an Atta-Mills letdown has created the impression whether he has the rigorous capacity to rule Ghana which development indicators are still pitiable and its on-going 16-years democracy yet to be consolidated. During the October 29 first presidential debate in Accra, the Daily Guide observed that Atta-Mills show “signs of lethargy and weariness were evident on him during the debate which became more obvious when he tried to raise his voice in an aggressive manner… [Atta-Mills] appeared to be angry with himself.”

With his image as having weak political DNA and easily manipulable by the Rawlingses, Atta-Mills had been a professor of business law at the University of Ghana and Commissioner of Income Tax. In Ghana, as in other parts of the world, university professors are highly respected because they are supposed to be sophisticated and independent minded. The political Atta-Mills appears, in all measure, not sophisticated and independent minded, a far cry from his remarkable picture as a good classroom teacher.

This has created the buzz that against other more politically savvy and physically fit NDC candidates such as Ekow Spio-Garbrah, the Rawlingses preferred Atta-Mills. The reason is that the Rawlingses saw in Atta-Mills a person they can control and dictate to, in case Atta-Mills wins the December 7 presidential election, in the presidency for their desired aims – re-rule Ghana using Atta-Mills as a front. Though Rawlings office denied it, a few months ago the Accra-based The Chronicle reported that an Atta-Mills presidency will see Jerry Rawlings as security chief that will make him virtually control the entire Atta-Mills governmental machine.

Bent on this aim, the Rawlingses has been serious on the campaign trail as if they are the NDC's presidential candidates and not Atta-Mills. On the campaign track the Rawlingses are devoid of projecting any Atta-Mills' policies, drawing huge crowds and overshadowing Atta-Mills the presidential candidate. More gravely, as the Daily Guide observed of the Rawlingses' various campaigns statements, “instead of telling the electorate about the policies of Prof. Mills, the former president used his six-day tour of the (Ashanti) region to blow his own horn and attack the Kufuor administration.”

For the sake of Ghana's greater progress, against the backdrop of its worrisome history of senseless military juntas and frightening one-party regimes, and how to consolidate its toddler democracy, in an atmosphere of peace, is Prof. John Evans Atta-Mills fit to be President of the Republic of Ghana come December 7, 2008?