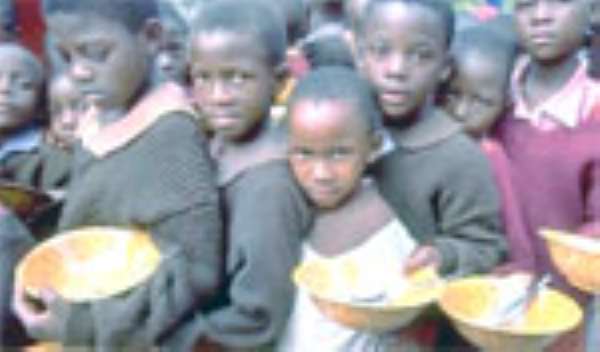 A fall in the level of extreme poverty over the years has reduced the incidence of malnourishment or starvation in the country and some parts of the world.

However, with food prices skyrocketing, that optimism now looks like complacency. Around the developing world, governments have seen the need to curb the situation where people go to bed hungry.

Concern is shifting from the farmers whose interests often predominate at times of plenty to the angry and desperate urbanites, who cannot afford food at times of shortage.

Thomas Malthus, a renowned Economist, once alerted policy makers and scholars of the dangers of populating the world without check.

In his classical economics thesis, he postulated that while population is growing at a geometric rate, food supply is growing in arithmetic progression.

This, he said, would lead to hunger if mankind does not put measures in place to check population growth.

This thought was however overtaken by technological progress which brought about commercial farming.

The West, in an attempt to reduce its dependence on the continued rising price of products from hydrocarbon, has diverted lands originally used for crops to feed mankind, to crops to feed automobiles.

Lester Brown, Director of the Earth Policy Institute in Washington, said last Friday that land now being used for bio-fuels in the US alone in the last two years would have produced food to feed nearly 250 million people with average grain needs.

“This year, 18 percent of all US grain production will go to bio-fuels. In the last two years the US has diverted 60 million tonnes of food to fuel.

On the heels of seven years of consumption of world grains exceeding supply, this has put a great strain on the world s grain supplies,” he said.

Robert Zoellick, President of the World Bank, said prices of all staple food has risen 80 percent in three years, and that 33 countries face unrest because of the price rises.

As a result of the afore-mentioned factors, a new face of hunger is staring the world in the face.

A perfect storm of food scarcity, global warming, rocketing oil prices and the world population explosion, is plunging humanity into the biggest crisis of the 21st Century by pushing up food prices and spreading hunger and poverty from rural areas into cities.

Rising populations, strong demand from developing countries including Ghana, increased cultivation of crops for bio-fuels and increasing floods and droughts, have sent food prices soaring across the globe.

Ghana, according to the General Agricultural Workers Union (GAWU) has never had food security. It has, as usual, been importing rice, beans and other food items.

Because the sources of supplies of these importations are in food crisis, it has a spillover effect on Ghana.

The food crisis which started with sudden increases in the price of wheat, has resulted in food riots in several developing countries such as Haiti, Togo, Cote d Ivoire, Gabon, and Senegal.

Whatever may be the cause of the global food crisis, its impact on Ghana is real. Already, the price of wheat flour and rice both of which are now staple food in the country, have gone up.

No responsible government will sit down and fold its arms in the face of this looming danger.

The government of Ghana needs to plan to deliver cheap food. The poor in the country need to be freed from the hunger that threatens their survival.

The government must also go beyond a short-term approach to tackling the world food crisis by giving a boost to the country's agricultural sector to make Ghana self-sufficient in food production.