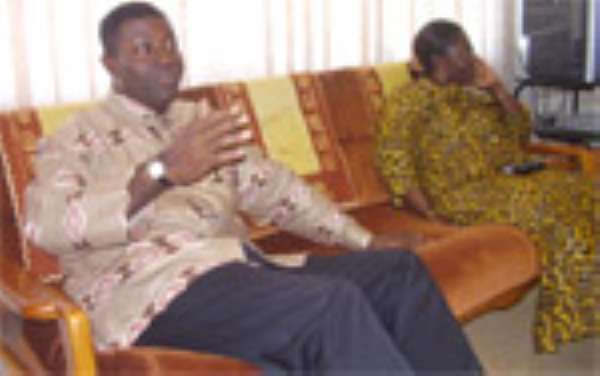 Starting next Monday May 12, 2008, beneficiaries of the National Youth Employment Programme (NYEP) will be smiling as they will receive the first tranche of arrears for April 2008.

Subsequently, the Ministry of Manpower, Youth and Employment had impressed upon the Ministry of Finance and Economic Planning to release monies from the various funds to pay other arrears for January, February and March 2008.

Nana Akomea, Sector Minister, disclosed this when he met some selected press houses late yesterday to brief them on the state of the NYEP.

The move would likely end the huge cry from beneficiaries who due to the outstanding amount had threatened to stage a demonstration this Friday and vent their spleen on government about the undue hardships they were facing.

The NYEP had been characterized by delays in the release of allowances for beneficiaries mostly because of the process that the funds such as the GETFUND, NHIS and Road Funds went through.

The major problem that had dogged the programme was the delay in payment of the funds, Nana Akomea emphasized.

However, he reiterated that his outfit had secured an arrangement with the Agriculture Development Bank (ADB) to manage the NYEP funds and consequently pay the beneficiaries contracted under the programme through accounts to be opened for them.

To this end, an offer letter was signed yesterday evening between the Ministry of Manpower, Youth and Employment and the ADB.
ADB was chosen after a competitive selection exercise conducted among 10 banks.

Nana Akomea stated that with the conclusion of the offer letter where his outfit would pay 1.29 percent charges to ADB, the bank would be paying the NYEP beneficiaries their allowance on a monthly basis even if they had not secured all the ten sources of funds on time.

He stated that the present arrangement had to be done because he realized that his ministry would only receive 10 percent of the Talk Tax which kick-started this month.

“These are difficulties we've been facing and that prompted the new arrangement,” the Manpower Minister mentioned.

He therefore appealed to the NYEP beneficiaries to exercise restraint since the ministry was committed to the course of the programme, considered as a flagship for the government.

Explaining some points on the economy, Nana Akomea said the population in the last 30 years had grown far more than the economic gains with the ratio standing at 3:1.

“We achieved inconsistent growth before my government assumed office in 2001”.

This, he said, was a great achievement by his government despite the rapid population growth.

The NYEP currently engages 108,403 youth across the country in different modules with 69,474 beneficiaries on pay roll.

Meanwhile hundreds of the NYEP beneficiaries yesterday besieged the Ministry of Manpower, Youth and Employment to demand their four-month payment arrears.

The beneficiaries refused to leave the premises until they had information that the monies were going to be released soon.