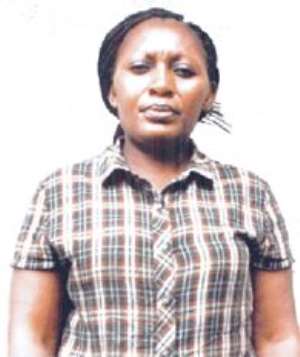 Two persons believed to have developed fake web sites of renowned companies and that of the Ministry of the Interior to defraud foreigners have been arrested by the police.

The suspects, Igbokwe Ogbonna, alias OGB, 42 and Theodocia Buaben, 35, are alleged to have developed the web sites of the companies, advertised for recruitment into those organisations and later directed the successful applicants to pay various amounts of dollars into an account for the processing of their resident and work permits by the Ministry of the Interior.

They are currently on police remand pending further investigations, while two of their accomplices, whose names are being withheld for security reasons, are wanted by the police.

So far, Cal Bank Limited, Ghana International Airlines and Unique Trust Financial Services have reported to the police the creation of fake web sites with the names of their directors posted on them.

Deputy Director-General of the Criminal Investigations Department (CID) of the Ghana Police Service, Deputy Commissioner of Police, Mr Patrick Timbillah, told the Daily Graphic that the suspects had so far collected more than $30,000 from their unsuspecting foreign job seekers.

Narrating how the issue was made public, he said management of Cal Bank reported to the CID on August 13, 2007 that a recruitment agency had faked their web sites and that of the Ministry of the Interior and enticed prospective job seekers from abroad to work with the bank.

The complaint by the bank was prompted by enquiries by one of the job seekers who had called to find out more about the job placement.

Mr Timbillah said on September 6, 2007, the police, through its investigations, arrested Theodocia Buaben, who had opened a dollar account with a foreign bank in Ghana to receive payments from the prospective job seekers.

Mr Timbillah said Theodocia mentioned Ogbonna as the person who requested her to open the account, because he was expecting some dollars from abroad, which she did for a fee.

He said the police arrested Ogbonna on September 7, 2007 during the course of the investigations.

According to Mr Timbillah, Ogbonna told the police that two other Nigerians resident in Ghana asked him to get a Ghanaian lady to open the account for the receipt of monies from abroad for a 10-per cent commission on any amount that was channelled through the account.

He said Ogbonna admitted to receiving about $30,000 through Theodocia's account at the foreign bank.

Mr Timbillah said while the police were investigating the case, the management of Ghana International Airlines and Unique Trust Financial Services also reported the faking of their web sites and advertisement for job openings for foreigners to apply for.

He said this new trend would be posted on the Ghana Police Service web site, www.ghanapolice.com, to alert prospective job seekers to be wary of the tricks.

He appealed to all foreign missions to caution their citizens at home to be wary of the tricks and not fall prey to the fraudsters.